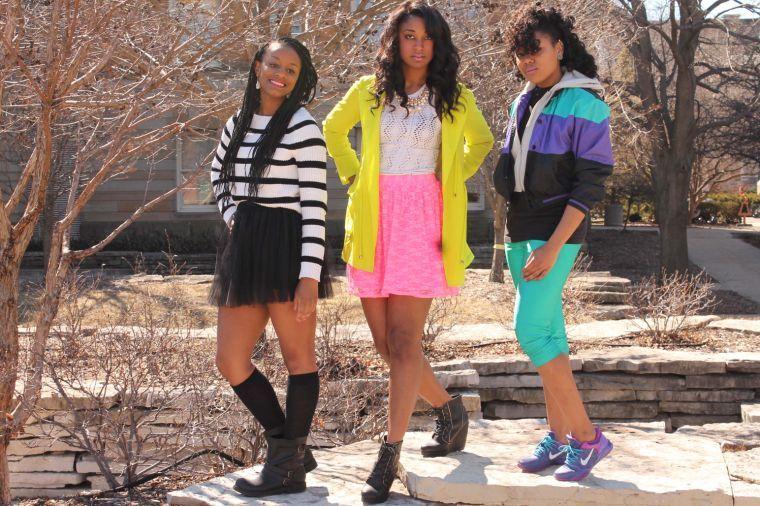 University students show off their trending fashion styles on the Engineering Quad in March 2014.

Growing up as a refugee from the war in Vietnam, Mimi Thi Nguyen, associate professor of Gender and Women’s Studies and Asian-American Studies, has always been interested in clothing and how it relates to the body.

Nguyen and her family were sponsored by a Catholic family, were taken out of a refugee camp and did not have access to firsthand clothing.

“For the first 10 to 12 years of my life in the United States, all my clothes were either donated by the church, bought at thrift stores or yard sales, or my mom made them,” Nguyen said.

Nguyen’s life experiences shaped the way she viewed clothing and also affected how she viewed herself in clothing.

“It was something that I had a lot of feelings about as a kid. When you’re a refugee kid, you’re one of five people of color in a small town in Minnesota, and you notice those things that … make you feel like an alien,” Nguyen said. “A part in that was not just the body that I was in, but the way that (I) was able to clothe it, and all of my clothes were secondhand.”

“I still tended to buy secondhand clothing because it was a part (of) a political argument about waste and consumption and also because I liked those clothes better,” Nguyen said. “I still prefer vintage clothes over new ones.”

During her teenage years, Nguyen started to develop a sense of style and figured out how she wanted to be perceived by starting to explore other clothing styles and ways to dress herself.

When she was a teenager, her family moved to San Diego, where she discovered punk and her sense of style.

Even in her adult years, Nguyen’s style still reflects many decades and variations of punk. Not only did punk have an inspiration on how she dressed, but it also trickled into her professional career. According to Nguyen’s website, she served as a Punk Planet columnist and “Maximumrockinroll” volunteer.

Nguyen would best describe her style as “1980s new wave party girl who woke up and realized that she had to teach a class … after partying at the club at night … all night.”

Nguyen’s style does not change even when she is going to work.

“Her personal style is great,” said Josette Lorig, University alumna and Nguyen’s former student. “I remember coming to class and wondering how she could look so fashionable and yet so authoritative.”

Wearing a vintage, bright red-and-black-striped sweater-dress with a bold red lip to match and pointy-toed heels, Nguyen has no problem expressing her sense of style in the workplace.

“Mimi is super stylish — people look at her like a fashion icon,” said Ruth Nicole Brown, GWS professor and Nguyen’s friend. “Her style disrupts the stereotypes of how a professor is supposed to look.”

One of the topics Nguyen enjoys exploring is the perception the public has on professional attire.

“I am an African-American woman with natural hair, and now I am an attorney, and I don’t feel the need to tone down my personal professional style,” said Jasmine Davis, University alumna. “Mimi’s class taught me how to do that.”

She likes to engage in these conversations with her students and to discuss the stereotypes of professionalism.

“The imagination of what a professor looks like is very raced, classed and gendered in particular ways, and then on top of that, there is the idea about what that person wears,” Nguyen said. “If you do a Google image search for ‘professor,’ it’s like old white dudes with corduroy and stuff.”

Nguyen does not let the general perception of what a teacher is supposed to look like interfere with how she chooses to dress. Her colleagues are supportive of her “punk rock” style and knowledgeable about the professional work she does outside of teaching.

“There’s a certain way in which I can get away with it because it’s a part of my professional profile,” Nguyen said.

Since 2006, Nguyen has been a professor in GWS and Asian American Studies, where she teaches a politics of fashion course and feminist theory courses for both graduate and undergraduate students.

“The most rewarding part for me was knowing that I was going to be a professor who was fairly young and also a woman of color,” said Myra Washington, University alumna. “Mimi was amazing because she modeled everything I thought a really good professor should do.”

In these courses, Nguyen discusses a variety of topics about femininity and empowerment. One topic, in particular, is the specific perception of a woman to be viewed as professional based on her attire. She even reflects on her experience while transitioning into the professional world.

“Definitely, before I became a professor, it was really torturous for me on how to look like a grown-up,” Nguyen said. “I remember getting advice in grad school about how I needed to get a suit to go on interviews, and I just felt like a kid playing dress-up.”

After feeling uncomfortable in her black pin-striped suit, Nguyen took a calculated risk to dress the way she normally would. By making this choice, she accepted the fact that some people may not be accepting of her clothing style.

“I mostly get away with it, but who knows how other people perceive me because of this,” Nguyen said.

With all the professional advice students are receiving while transitioning from college to the workplace, Nguyen wants her students to think about the story their clothing tells the public.

She provides them with an interesting perspective of clothing and how it can be a limitation.

In her classes, some of Nguyen’s students present her with the concerns that they have as being perceived as professional women.

“I’ve had students talk about how they have bigger breasts, and they have a harder time finding shirts that cover them, so they have anxiety about being read as unprofessional because it’s really hard to find a button-up shirt that won’t pull at the buttons,” Nguyen said. “They have legitimate worries about how their limited access to super expensive, Oxford-tailored blouses to help them cover their breasts and how that will affect their ability to get a job.”

Nguyen has many talents and has made some impactful contributions to the social, political, academic and fashion industries.

Her upbringings have unquestionably impacted and shaped her into the woman she is today.

With all the work she does, a theme of confidently embracing who you are as a person and being unapologetically yourself is constantly shown throughout all of her pieces.

“The amazing thing to me is how humble she is,” Brown said. “She’s definitely a nice person, and those are two things that usually don’t go together.”