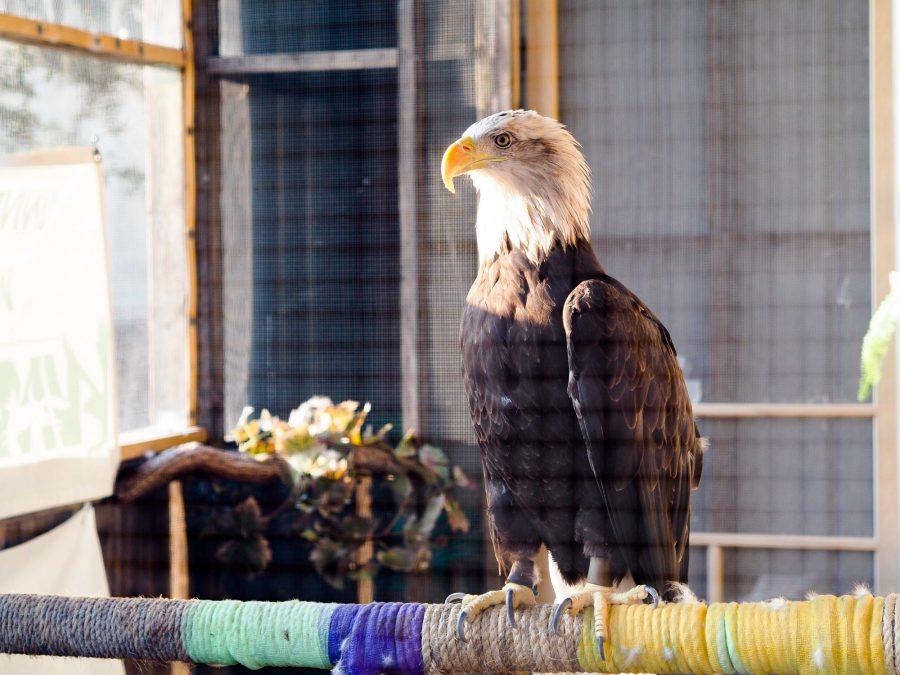 Behind the Vet Med Basic Sciences Building on Sept. 6, a newly introduced bald eagle named Rose has found a home in Urbana.

Outside the Wildlife Medical Clinic on the south side of campus, a small, wooden enclosure is the home of the national emblem: a bald eagle named River.

On her perch inside, River’s iconic white crown is a reminder of national status as she tilts her head, cautiously eyeing passersby.

Meghan Armstrong, a student volunteer at the clinic and one of River’s trainers, approaches the enclosure slowly. “It’s okay, it’s okay,” she says reassuringly to the eagle. Meghan has played a hand in River’s recovery since the day she arrived at the clinic.

That was in March 2015, after the eagle was spotted swimming in the Illinois River near Peoria. She was rescued and brought to the clinic, where an exam revealed that bones in her right forearm were broken. The clinic decided to perform a wing amputation surgery. Several surgeries later, the wound was finally managed.

“During that time we were still pursuing options, trying to find places for her in another educational facility,” said Dr. Nicki Rosenhagen, who was an intern at the clinic at the time and helped with River’s recovery. “We were coming up short over and over again.”

Bald eagles are no longer an endangered species, and many other educational facilities already have one. Knowing that this bald eagle, who is around five years old, had a low chance of surviving in the wild, they decided to apply for a permit to keep her.

That was the first time in its history that the Wildlife Medical Clinic has had a bald eagle as a resident animal. She was named River —  to reference where she was rescued — after the public was invited to submit name suggestions (other notable name candidates: Baldy, Betsy Ross, and Leftie).

It’s been approximately a year and a half since River became a resident at the clinic, and Armstrong has seen her progress since the start.

“I was on the treatment team that was treating her when she came to the clinic, so I’ve actually seen her from day one,” Armstrong said.

It took a while for River to respond to training, and for good reason.

“She was always very reactive to humans,” Rosenhagen said. “She underwent a really painful procedure — a necessary one, but a very painful one — so she very rightly developed an aversion to people.”

At the sight of a human, River would panic. So the recovery team began to use food to have her associate human interactions with positive experiences. Rosenhagen would stand in River’s enclosure and toss her food from a safe distance. Soon, River accepted food from large barbecue tongs, and later, from tweezers.

Armstrong became one of River’s trainers in February and said that with time and persistence, River soon grew to trust her.

“I did a lot to try to make sure she would get used to me and realize that I wasn’t trying to hurt her, even by just going and sitting in her enclosure for a couple hours a day and studying,” she said.

Similarly, Adrienne Coleman, another one of River’s trainers, would talk to River as she cleaned out her enclosure, and then worked on training last so River would be rewarded with food.

As River became more acquainted with humans, her three trainers — Armstrong, Coleman and Nancy Anderson — started to work with her on different commands, such as learning how to go up on a perch or enter a crate.

Learning these commands will help River fulfill her roles of being an educational animal and an ambassador for her species, which are the intended roles of resident animals at the clinic.

The decision to keep an animal as a resident is not made lightly.

Applying for a permit requires providing proof that the clinic has the ability to care for the animal. They also consider whether the personality of the animal will be a good fit for the clinic.

“She’s a relatively calm eagle,” Coleman said. “She is a powerful bird, but she has never shown any signs of aggression.”

The added cost of bringing in a new animal is another factor to consider. The clinic, a non-profit that is not funded by the University, relies heavily on donations from the public.

With only seven other resident animals, they see River as an exciting addition.

“People are really happy, not that she’s in captivity forever, but that she’s going to be an ambassador for her species and help encourage kids and members of the community to want to help with wildlife and learn and peacefully coexist with them,” Rosenhagen said.

The hope is that River will attend events and presentations, and her trainers are happy to help her get there.

“You fall in love with her, in a way,” Coleman said. “She had us hooked from the very beginning. She’s a very fun bird, and I think it’s just one of those things where once you’ve gotten involved with her, it’d be really hard to not stay involved.”

For Armstrong, looking back on River’s progress is gratifying.

“Every time I work with her, I sit and think about that, you know, she’s been here for a little over a year and she’s come this far already,” she said. “She still has such a long way to go, but the fact that she’s at least responsive to us and that she has grown to trust us, to me, that’s really, really cool.”