More than just a parking space: Students reimagine the roles of urban areas 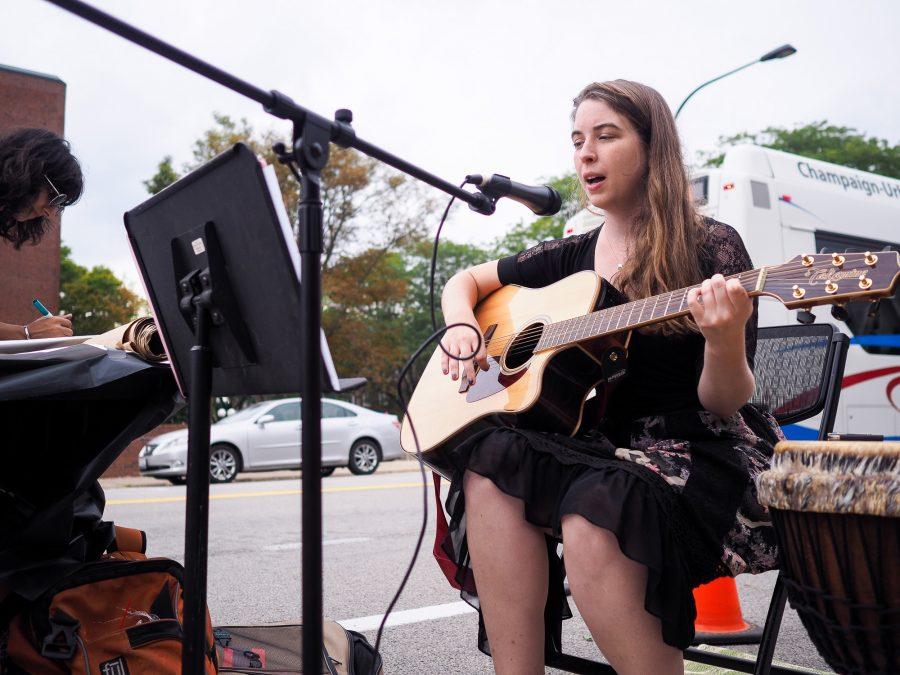 Friday morning was seemingly just like any other at the intersection of Goodwin Avenue and Nevada Street in Urbana. Cars drove by, buses let off passengers, and students used the sidewalks to head to class.

But 10 parking spots did not assume their normal functions. Instead, the spots were filled with a mini-park, a bike repair booth, students throwing paint on a canvas and more.

The transformed parking spaces were a part of Park(ing) Day, a global event that encourages people to turn parking spaces into temporary public parks.

“What we’re hoping to do is transform these spaces to allow people to envision what an alternative could be,” said Gurdeep Kaur, president of the Student Planning Organization, the University RSO that hosted the event.

Park(ing) Day began in 2005 in San Francisco, with a single parking spot being turned into a public park for the day. Today, people across the world celebrate the event by transforming parking lots in their own cities.

Urbana’s event was the only one taking place in Illinois, which Kaur said illustrates the city’s and the University’s values.

“I think it’s great that we’re the only one (in Illinois),” she said. “I think it’s helping lead that change. I think it speaks to the positive qualities of our University and the students here, because so often we’re compared to larger cities, but some of the cool stuff is happening right here.”

Geoffrey Gray-Cornelius, a Master’s student in urban planning, attended the event on Friday, manning a parking space that was offset from the road by traffic cones.

“This is a unique opportunity to get involved that’s not in the classroom,” he said.

Not far away, students passed by as they walked to class, watching the parking spot designated for an open mic, where the sound of a single guitar being strummed was often drowned out by the sounds of passing vehicles.

Kaur said the mission of Park(ing) Day is not only about rethinking existing parking spaces, but also about activating the urban landscape and encouraging non-commercial, public spaces.

“So much of the space that we move through is private,” she said. “I think that more open space allows for people to enjoy their communities a little bit more.”

Taking away a single parking space — which would otherwise likely be coveted on campus — could allow people to imagine a future that isn’t so auto-oriented and dependent, Kaur said.

“It allows people to think of alternative ways,” she said. “If they didn’t have a parking space there, what could go there instead?”