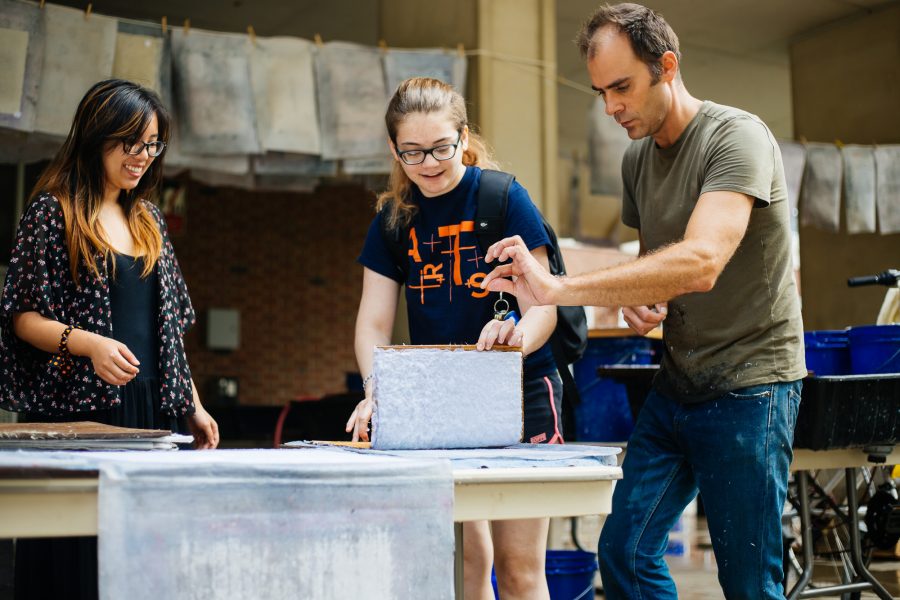 (Left to right) Diana Liao (senior), Avalon Ruby (freshman), and Drew Matott placing a piece of paper onto the table to remove it from the screen. This was during the Peace Paper Project at Allen Hall on Wednesday, September 14, 2016.

Artists approach a blank canvas in anticipation of what they can create on the space provided. Drew Matott of the Peace Paper Project has dedicated his life to creating that canvas.

This past week, Drew Matott and Jana Schumacher provided workshops and lectures at Allen Hall through the Guest-in-Residence program. During lunch hours on Sept. 12 through Sept. 15, students were welcome to join the pair on the front porch of Allen to learn how to make paper out of different materials.

The workshops from 11 a.m. to 1 p.m. were followed by events in the evening, all incorporating multicultural elements of traditional papermaking. James Zachary Kensik, freshman in DGS, said he stopped by because it sounded intriguing and then found the process to be different than he had imagined.

“It’s both simple and complicated. Easy to learn, hard to master,” Kensik said.

Matott and Schumacher agreed with this and were excited to see the smaller group of students who returned to the workshops on a consistent basis. However, the intention of both papermakers went much further than just inviting students to hone a craft.

After some time in the process, participants will begin to teach newcomers as they begin to take ownership of the artform, Matott said. Schumacher added that the longer time slots to work on the pieces provided students a chance to try something new and emphasized the importance of advocating for a non-judgmental environment.

The Peace Paper Project visits colleges in the U.S. but will also bring the skill to prisoners, victims of sex trafficking, veterans and refugees around the world.

“(We) evolved from response to demand,” Matott said about the program’s reach.

Schumacher, originally from Cologne, Germany,  joined the organization in January, but Matott has been pulping materials into paper for the past 17 years. While studying a printmaking program at Buffalo State College, Matott was introduced to the process mostly out of conservation.

Having lost his father due to a car accident when he was two years old, Matott recounted visiting the box in his house filled with poetry, possessions and clothes owned by his father. Matott discovered the power behind papermaking after deciding to turn his father’s old clothing into books filled with his father’s collected poems. His family members shared memories and stories of his father as they sat together and made the pages of the books.

“(It was) a powerful, moving experience for us,” Matott said.

The preservation of his father’s memory through art extended into the Peace Paper Project: art therapy and social advocacy on an international scale.

Schumacher’s artistic background has a stronger focus on drawing and installation art. She is accustomed to looking around in a space and launching her projects from one specific point.

Her connection to Matott came from a family in upstate New York. She had studied abroad with them when she was in high school. Although the two met for the first time in 2008, they kept in touch and now plan to launch the next chapter for the program this year to bring German and Syrian youth together.

Schumacher explained how the surge in refugees and coverage from the media is what has sparked attention worldwide.

It was not only Germany but all of Europe who logistically could not provide for the sudden influx of people.

“(People) flee all the time — but usually not 1.1 million,” said Schumacher in reference to a statistic released in 2015.

Although there have been positive reactions in Germany, Schumacher acknowledges there is also opposition primarily due to fear of the unknown. In a divided nation, Schumacher and Matott have teamed up to bring papermaking to Germany through a new studio in Hamburg for an inclusive and empathetic environment.

Through the visit to the University, both artists admit they cannot be entirely sure what sort of impact they will have. Matott explains the thought behind bringing international techniques of papermaking to campus.

“(It is) a celebration of global community and humanity,” Matott said.

Schumacher pushes this idea by sharing her hope for people to talk about the techniques and to spread the heart of the Peace Paper Project within their respective spaces. By teaching others to teach, the duo lean on the ideal for humanity to have each others’ backs.

Schumacher said she believes individuals may have a good time making paper, but the larger influences are up to the students and participants to advocate once the pulp and Peace Paper Project has left campus.

The best result would be for students to remember because by doing so, “they join in on (a) celebration,” Schumacher said.