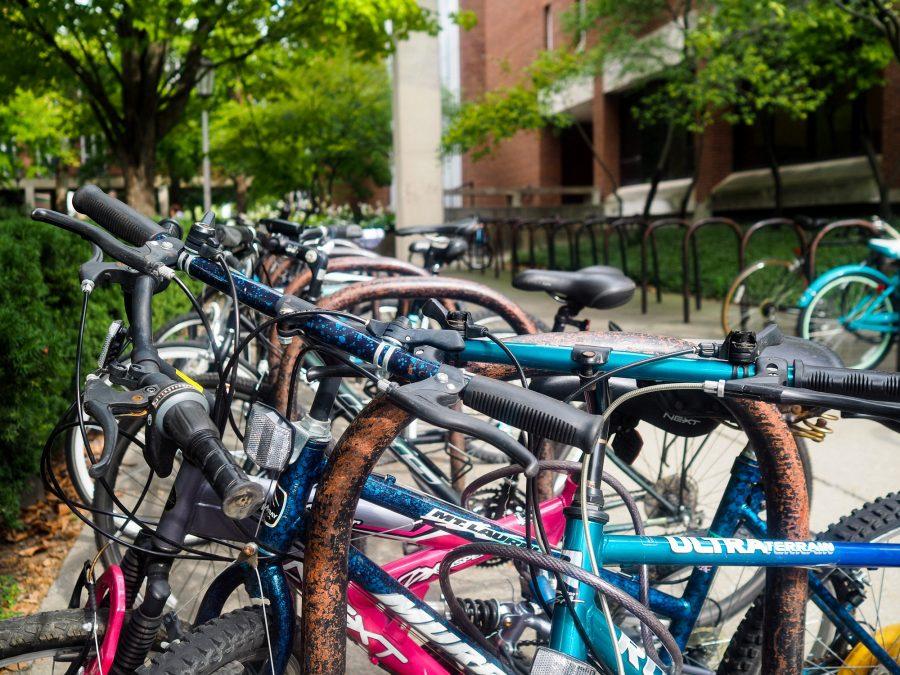 Bikes sit at the bike rack on the Quad.

Several years ago, Barry Isralewitz sat in his car and witnessed another car in front of him collide with an unseen bicycle. Had the bicycle been illuminated, the car would have seen the cyclist and the accident could have been prevented.

Isralewitz is now the co-founder of The Bike Project and a major contributor to the Light the Night project.

Light the Night, an annual event that provides free bike lights, will take place from 4 to 7 p.m. on Thursday. There are two locations where volunteers will be stationed: the corner of Green and Wright Streets and the corner of Lincoln and Illinois Streets. This will be the eighth year that the event will take place.

“It was something I had been working for years to prevent,” Isralewitz said about the collision that sparked Light the Night.

It is a law in C-U that all bikes must be equipped with front lights and a rear reflector to make it easier for cars and pedestrians to spot bicycles on the street. Because of this, MTD, the Facilities and Services department and the community will team up to host the event.

During Light the Night, volunteers will be giving out free light sets and help install the gear on participants’ bikes.

“There is nothing more fun than giving someone a free bike light set,” said Lily Wilcock, active transportation coordinator at the Facilities and Services department. “I’m not plugging them or asking them to sign up for my list. I’m not asking them for money. I’m not doing anything except giving them lights.”

Because the University is such a large campus, transportation is a necessity. The lights make it easier for people to get from one place to another safely.

“Mobility is a critically important thing for everybody in our community,” said Jan Kijowski, the marketing manager at MTD. “MTD’s mission statement is to lead the way for greater mobility … We want to make sure that everybody is able to interact with one another safely and effectively.”

This event has two main goals. The first is to bring awareness to the law and make the streets safer for bicyclists. The second is to create a more sustainable campus and reduce the amount of energy used at the University. While the event won’t be able to completely solve the problem, it can at least help.

“When you use a bicycle instead of a car, you are actually reducing every day a huge amount of car emissions that you would’ve been emitting otherwise,” Wilcock said.

There will be a total of 1,090 lights sets, each set containing two lights. And according to Kijowski, the lights have run out quickly in the past, so she encourages everybody to come as early as possible.

“We’ve got over 50 volunteers for the event. Now we just need 1,090 more people with bikes,” Wilcock said.