Louis the Child focuses on happiness 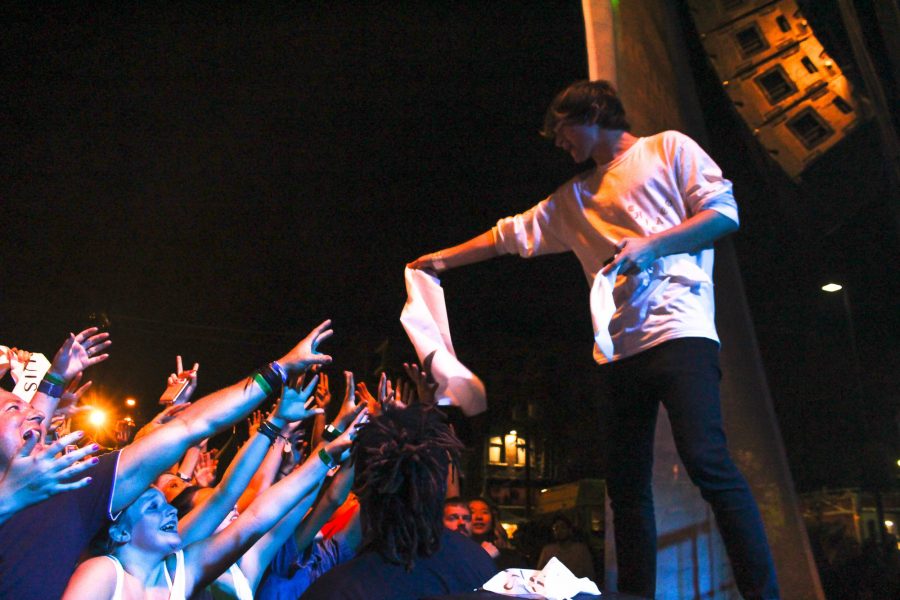 Louis the Child performs for Pygmalion Festival 2016 behind the Accord on Saturday night.

Louis the Child is thankful for their fans, and with good reason.

The duo’s 80-minute set on Saturday at The Accord was carried by the crowd’s near-hysterical enthusiasm with each remix.

Robby Hauldren and Freddy Kennett — the Chicago-area natives who comprise the band — ran onto the stage in matching black and white sweatshirts with “Louis” printed on the back. Members of the mostly college-aged audience were wearing the exact same merch.

Most of the action came not from the artists, but from the frantic light show that flashed around the raised table where the two DJed. Occasionally, Kennett would climb on top of the table and jump off wildly while Hauldren focused on his mixer console.

Their set featured almost exclusively remixes that appealed to the crowd, who cheered once the opening bars of “Closer” by The Chainsmokers started playing before it eventually remixed during the chorus.

“Closer” then transitioned smoothly into “Controlla” by Drake, which was the general flow of the concert. Each remix blended together between choruses of well-known singles while the DJs encouraged the crowd to jump.

For Louis the Child, the focus was entirely on the audience experience. Stage lights would focus on the packed crowd every time the body-shaking bass dropped, and the DJs took a break from mixing to throw bandanas into the mob, which immediately surged forward to catch one.

Unlike the typical head-bobbing or moshing that comes standard with most Pygmalion shows, this set was more comparable to a night out at the bars — complete with spilled drinks and very public couples — with slightly more jumping and screaming.

A highlight of the set was one of Louis the Child’s friends, who came out and added live trumpet to the standard mix after throwing out more merch.

Midway through their set, Hauldren asked the crowd to cheer if they had seen the duo before and then cheer if it was their first time at a Louis the Child show — it sounded like an equal, enthusiastic mix.

“This is the part where we turn it up a bit, make it a little crazier than usual,” Hauldren said.

Apparently this meant amping up the light show, playing more remixes of popular songs like “Pillowtalk” by Zayn and crouching on top of their table to mix. They also spent more time moving to the front of the stage to point and wave to front-row members.

It’s possible that they were waving to high school friends. Both DJs were students at New Trier High School and have maintained old friendships while gaining fame, launching a national tour and playing festivals like Coachella, the Electric Forest Festival, Electric Zoo New York and Lollapalooza.

They encouraged the crowd to come together for a “family photo” at the end of their set, posing with their crew and close friends who had been cheering them on from the side of the stage.

The last song of the set was arguably the single that made them famous. “It’s Strange” featuring K. Flay, a rapper who also attended New Trier, was included in the FIFA 2016 soundtrack and added to Taylor Swift’s “Songs that Will Make Life Awesome” playlist.

When the bouncing, timpani-emulating notes began, the crowd screamed in recognition. Hauldren and Kennett strutted to the edge of the stage to reach out to their fans — “Oh my god, I actually touched his hand!” one girl exclaimed to her wide-eyed friend afterward.

Louis the Child has said their goal is to create music that makes people happy. For high school friends and fans who have seen them rise through the ranks, Hauldren and Kennett made this the happiest night of Pygmalion.