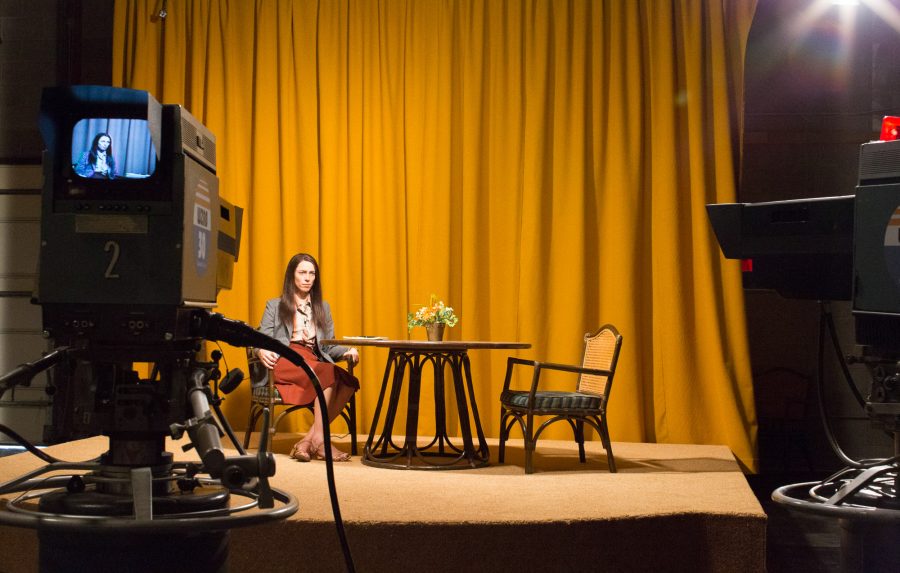 Scene from CHRISTINE, which played at the Chicago International Film Festival.

Editor’s note: The following content has been edited for length and style. For the full version visit dailyillini.com. It was written for an Ebert Fellowship in memory of the late Roger Ebert.The fellowship works with the forthcoming Roger Ebert Center at the College of Media. Chicago Tribune film critic Michael Phillips advises the Ebert fellows.

When it comes to the phrase “film festival,” students in Champaign-Urbana may first think of the Roger Ebert Film Festival, held every year at the Virginia Theatre in April. However, the Midwest supports hundreds of film festivals, small and large.

Last weekend, the University of Illinois’ 2016-17 College of Media Roger Ebert Fellows traveled north to Chicago to experience a day in the life of the Chicago International Film Festival. The Fellows viewed a variety of films and talked with filmmakers from Virginia, Florida, California and Afghanistan. Our first-encounter reports of Saturday’s films follow.

“News and entertainment have been on a collision course since the invention of television. There’s nothing new about that. This may be a mark on the timeline,” said Tracy Letts, acclaimed writer and actor.

Letts spoke during a Q&A following the Chicago film premiere of “Christine.” Antonio Campos’ film is competing in the festival’s international competition slate. It’s a movie that feels wickedly relevant in today’s social landscape. With the 2016 presidential election and the rise of clickbait news, sensationalism dominates media coverage. But it’s far from anything new.

Based on actual events, “Christine” follows 1970s Sarasota TV reporter Christine Chubbuck, played by Rebecca Hall, as she grapples with personal anguish and professional standstill that culminate in an attempted suicide during a live broadcast. Letts plays the overbearing station director driving Chubbuck toward rating-friendly sensationalism.

The grumpy station director is a cliché character in film, and Letts’ portrayal is a successful iteration. As he noted, he has a history of playing middle-aged curmudgeons. Yet the seasoned Letts brings layers to Michael, making him more than just an adversary pushing Chubbuck deeper and deeper into mania.

“I found him not just a one-dimensional asshole in a suit,” Letts said. “He seemed to have some genuine (respect) for her, though in the form 1970s gender politics that aren’t that different than 2016 gender politics.”

The film succeeds in humanizing the deeply troubled Chubbuck. Letts noted the real-life Chubbuck’s coworkers recounted her as funny. Actress Hall flourishes as the career-driven reporter whose circumstances would make anyone feel isolated.

Chubbuck was pushed to extremes to be heard and remembered, but her shocking act is not all that outlandish. This demand for shock isn’t exclusive to TV newsrooms. A second festival film that screened Saturday at the AMC River East 21 is rooted in the sensationally grotesque.

“Are We Not Cats” by the Chicago-born Xander Robin stars Eli, a troubled, lonesome 20-something with an impulse-control disorder for eating hair. It’s called trichophagia, and it binds him with the equally as lost Anya. It’s also a condition Robin suffers from. In 2013, he created the film as a short, but wanted more. He recalls being mad at himself for holding back on the grotesque.

“I just had to convince myself it was worth it to show things that are ugly because it would make the movie better and it would make it more interesting,” Robin said.

Robin’s film is competing in the new directors category. It’s a rom-com with splashes of gore, but don’t call it a horror film.

“I love mutations and gore, (but) I don’t think in the way of how to create a scare,” Robin said.

While the film never fully pushes past its initial grotesque appeal, Robin succeeds in the nuances. The film’s visual palette mimics that of pleasure and pain.

“Are We Not Cats” will rescreen at the Chicago International Film Festival on Saturday, Oct. 22 at 12:15 p.m. “Christine” is now playing in limited release.

A series of pleasant surprises defined this festival newcomer’s impression of the Chicago International Film Festival, based on how films were presented and how the directors in attendance discussed their films with the audience.

“Wolf and Sheep,” the debut feature film by Afghan filmmaker Shahrbanoo Sadat, screened Saturday. The film won the Art Cinema Award at the 2016 Cannes Film Festival. “Wolf and Sheep” takes place in a small village in central Afghanistan, and it does not follow a main character throughout its duration. Instead, it captures vignettes of the boys, girls, men and women living in the village.

Sadat said the decision not to focus on a single protagonist is risky because viewers are accustomed to following a lead, so they might feel lost and lose patience with the film. However, she said the film intentionally keeps an eye on the entire community.

“It gives an observational view because you are not involved emotionally with any of these characters,” she said. “You are not attached, you don’t cry, you don’t love, you just see. And I think this maybe connects to observation.”

Sadat said that she wanted to tell a story about everyday life in central Afghanistan because she did not connect to the films that focus only on issues of war, drugs and violence against women in her country.

“We always are ignoring the small things that are going on around us, and they are the base and the roots of bigger problems,” she said. “For me, if I want to talk about Afghanistan, I think it’s very clear if you study people, how they behave with the children, how they behave with each other, how they react, what they believe … all these things, it says a lot about the mentality of people and it says a lot about why Afghanistan is like this.”

The documentary “American Anarchist,” directed by Charlie Siskel, also played Saturday. It concerns William Powell, the author of the controversial bomb-making manual “The Anarchist Cookbook,” which was published in 1971 and was used as insidious inspiration in various acts of home-grown terrorism such as the Columbine school massacre.

The documentary focuses on Powell’s struggles with the book’s negative impact. Last year, Siskel went to Massat, France, to conduct long interviews with Powell and his wife, Ochan, in their isolated home. In the Q&A after the screening, Siskel said he was interested in Powell’s human story and choices he made throughout his life.

“I think that filmmakers ought to be provocative; otherwise, what are we doing?” Siskel responded to audience members who questioned his prodding of Powell in the documentary, as he is heard asking Powell difficult questions. Siskel said Powell was not the kind of subject who would open up about difficult subjects without provocation.

“You want to be open to surprises. You want to be proven wrong; you want it proven to you that you only had part of the story,” he said. “I went in thinking one thing, and it turned out to be another, so I think that’s what we’re all looking for, and then if you can make that part of your story, that’s even better because then the audience gets to have that experience.”

“Wolf and Sheep” will rescreen at the Chicago International Film Festival on Thursday, Oct. 20 at 1:45 p.m.

Virginia native Josh Locy’s debut film “Hunter Gatherer” follows Ashley, played by Andre Royo of “The Wire,” who has returned home from prison. The narrative moves quickly but Locy holds his shots and allows the characters to live out the scene; the pacing’s never rushed.

Set in south L.A., “Hunter Gatherer” is atypical of movies related to that area. The film is devoid of drugs, violence or even cursing. Instead, the emphasis is on the relationships that Ashley has with the people around him and how his self-destructive behavior hinders him from achieving his goals — namely, winning over a former girlfriend, Linda.

Ashley also makes a spontaneous friendship with Jeremy, who lives in a nursing home to take care of his dying grandfather. Jeremy serves as a partner in Ashley’s self-fulfilling schemes, contrasting purity to indulgence.

Locy talked about developing what he hoped was an authentic portrayal by trying to “be clear about the motivation of the characters and why they’re doing what they’re doing.” The dynamic between Jeremy and Ashley is unique. The two feed off one another, as Ashley provides a wrench in Jeremy’s routine and Jeremy gives Ashley stability and an accomplice.