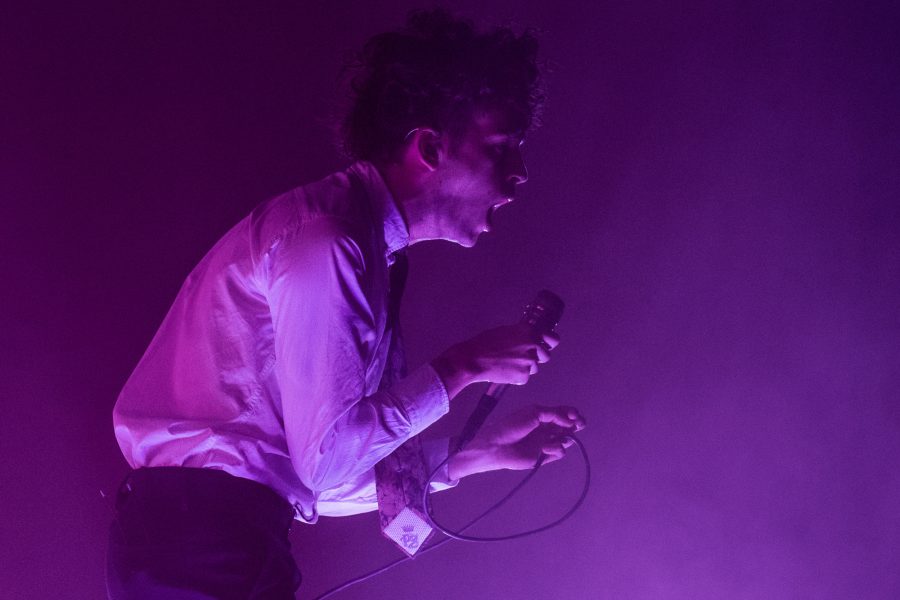 The 1975 began its concert with TV static, as if the audience was tuning to the correct station. Once the static turned to a soft violet glow, The 1975 began.

The band played at 9 p.m. Friday at the State Farm Center, which is hosting three sequential concerts as part of its “Grand Reopening” after two years of renovations. The 1975 is on its largest North American tour after releasing the album “I like it when you sleep, for you are so beautiful yet so unaware of it” in February.

The album has a self-aware focus, commenting on the duality of fame and responding to the personal issues with drugs and relationships introduced in The 1975’s self-titled 2013 album. The inclusion of a television motif made the theme of constant performance even more pointed.

The nearly full half of the stadium was on its feet for the first song, “Love Me.” Frontman Matty Healey encouraged the crowd the sing along from the start as he strutted loosely across the stage and onto platforms that brought him closer to the audience.

The second track, “UGH,” gave the audience its first taste of the intricate effects that accompanied the show. The large backdrop and four rectangular columns toward the back of the stage synchronized to show a black and white scene of New York City at night.

The band took full advantage of the State Farm Center’s size and effects capacity to enhance its personal tracks with impressive visuals. This was put to especially good use during the calmer, instrumental song “Please Be Naked.”

Black and white waves inched down from the top of the backdrop until it reached the columns, surrounding the band with flowing waves before plunging underneath the water. The band and audience seemed to sink slowly into the teal water until a spot of sunlight faded away. For an entirely instrumental song that does not encourage dancing, the sequence engaged the audience in a fitting and impressive way.

Midway through the set, Healey paused to talk to the audience, thanking them for letting the band play older songs. He shifted focus a more serious topic: politics.

The 1975 is based in Manchester, England, and Healey brought up Brexit, the June referendum in which 52 percent of British citizens voted to leave the European Union.

“We f—ed everything up properly,” he said. “We expected an older generation to make the right decision.”

He added that even though going to concert is a way to escape everything stressful going on in the world, he wanted to take the opportunity to reach out to his younger audience.

His brief speech was met with a round of applause from the audience. He then encouraged compassion and launched into the song “Loving Someone.”

As a performer, Healey seems comfortable on stage, interacting with the audience in a personal way by seeming to casually chat through the lyrics. The elaborate light show full band – including a saxophone player – has the potential to be excessive or over the top, but Healey’s loose-limbed dancing and interaction with the audience grounded the act.

He is the most well-known member of the band, partially because of his heartthrob status – directing an extra “baby” to the front row almost drowned out the music with screaming. However, he was quick to direct attention to other members of the band, particularly during instrumental solos.

A little over an hour into the 90-minute set, the band exited to immediate cheers for an encore. The 1975 did not disappoint, quickly returning to the stage with a backdrop with an aerial view of Los Angeles at night.

Rather than an encore, it was more like a second act, filled with higher energy tracks and intense, brighter lighting.

During “If I Believe You,” which explores Healey’s experience with religion and atheism, he climbed onto a platform to wildly direct an extended saxophone solo. He was silhouetted in white from the backdrop as he emphatically waved his arms like a combination of a conductor and a preacher leading a sermon. He held what appeared to be a cigarette in place of a baton.

The band finished the set with some of their top hits: “Girls,” “Chocolate” and “The Sound.” The audience jumped in sync as the band played additional choruses to keep the show going.

When The 1975 exited the stage, the light effects continued to play, reverting to a pink-tinged static and wavy rainbow bars, as if the connection was being lost. The backdrop image contracted into a single point of light, and the TV was turned off.