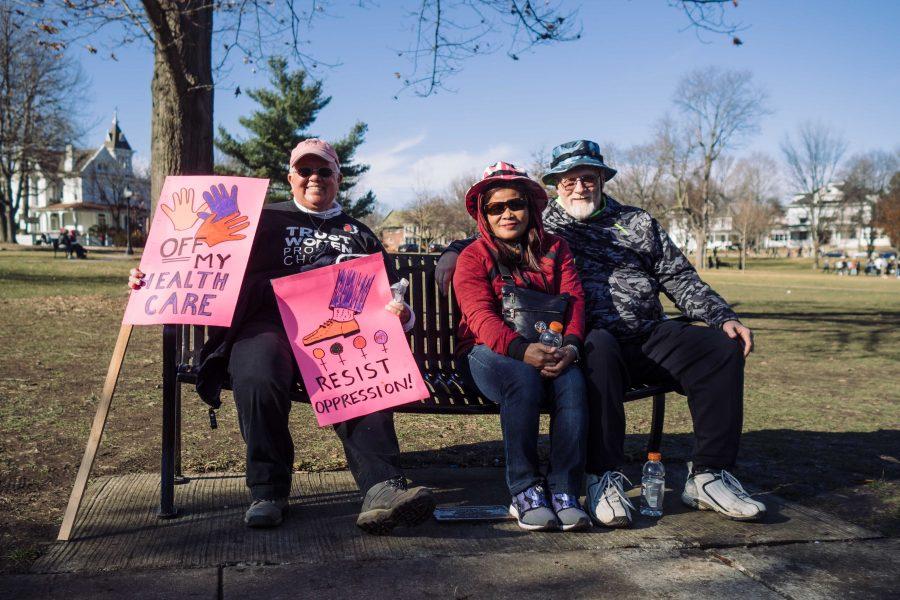 Women march in protest of the president Trump administration on Saturday, Jan 21 2017.

Christine Hartman of Savoy sat on a bench in Champaign’s West Side Park while her friends searched for their group, the League of Women Voters. She goes by Bamm and carries a cane wrapped in rainbow yarn.

Hartman has chronic pain and depression. She received expanded Medicaid and is frightened about recent efforts to repeal the Affordable Care Act.

“I have very generous friends who will help me out, but I know that I am an exception; I am not the rule,” Hartman said. “There are so many thousands of people who will die; that’s unacceptable to me.”

Hartman isn’t alone. Thousands of men, women and children descended to the park Saturday morning for the Women’s March on Champaign-Urbana. Hosted by the Champaign County Young Democrats, the event is one of 673 registered marches worldwide in affiliation with the Women’s March on Washington.

Donaldson carried a sign saying, “Men of quality do not fear equality.” He wrote a quote from former president Barack Obama on the back of the sign.

“It’s just my duty to come down here and remind people how important it is to our future, to our country and to the future of our race to make sure things don’t get reversed,” Donaldson said.

State Rep. Carol Ammons kicked off the event with a pre-march speech. Several speakers followed, including Evelyn Reynolds of Black Lives Matter C-U and Sanaa Khan, a University student and member of the Muslim Students Association. An American Sign Language interpreter stood next to the women as they spoke.

Kara Hagen of Urbana came with her young daughter Rwen. Both said they were displeased environmental issues never came up in any election debates.

“We are here to support women, the Earth and all (that) the government is not supporting well enough these days,” Hagen said.

Rwen said she came to support seals. She carried a pink sign strewn with the phrase, “support the seals.”

After roughly an hour of speeches, marchers lined up on the sidewalk next to University Avenue. Volunteers stationed along the route, seen wearing vests and badges, led the group.

Because of the massive crowd, organizers canceled the intended march to Cowboy Monkey. Instead, they marched from West Side Park, through downtown Champaign, looping back to the park.

This proved confusing for many as the leaders returned to the park while a majority of marchers waited to form a line. Some participants left the march and instead headed to downtown Champaign for other scheduled events.

Shalonda Carr is a teacher at Martin Luther King Jr. Elementary School in Urbana. She wanted to represent her students, some of whom are immigrants.

“Part of my poster is what they think is important and what they demand from our new president,” Carr said.

Carr didn’t go for one reason; she came for anything that falls under human rights.

“They said everything that I would have said, which is respecting everyone, making sure that America is a place that should be welcoming and (where) people want to come.”

After marching, attendees were encouraged to head to Cowboy Monkey, where post-march programming continued. Organizers announced during the opening rally they created an original drink at the bar named “Nasty Women.” For every purchase of the drink, the bar donated a dollar to Planned Parenthood.

As of Saturday afternoon, 2,479 people had RSVP’d for the event on Facebook. Prior to Saturday morning, organizers expected between one to two thousand attendees. Although they did not attempt counting an official turnout, they estimated nearly 5,000 people attended.

According to the national march’s website, over an estimated 2.5 million people marched worldwide.