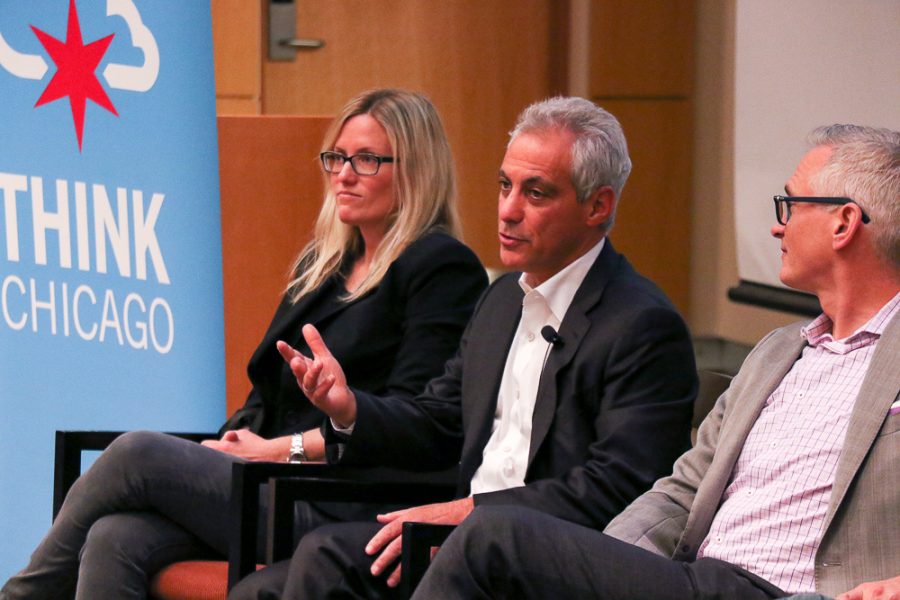 Chicago Mayor Rahm Emanuel speaks on a panel in the Think Chicago job fair at the Siebel Center on Monday, Jan. 30.

It’s 4 p.m., and every seat in the Siebel Center is completely filled. There’s the growing number of people who are standing in the back of the lecture room. Students and faculty anxiously await as the panel members file to the front stage – last, but certainly not least, to enter is the Mayor of Chicago Rahm Emanuel.

ThinkChicago was first established by Mayor Emanuel in 2011  with a mission to introduce bright young students from universities around the country to the growing “ecosystem” of technology and entrepreneurship in Chicago.

This year, 26 of the nation’s leading businesses participated in the informal job fair that followed the panel discussion, including World Business Chicago – chaired by Emanuel, GrubHub, 1871, Walgreens and PartySlate.

Members on the panel included Emanuel; Chris Gladwin, founder of Cleversafe and Ocient; Matt Maloney, CEO of GrubHub; Julie Novack, founder of PartySlate; and Rohit Pasam, CEO of Xaptum. The moderator for the discussion was Mark Tebbe, chair of ChicagoNEXT and University alum.

Each speaker emphasized that Chicago is a budding city where young people need to be, and that’s why it’s important to educate graduating students about the prolific opportunities the city holds.

“In order for Chicago to become a great entrepreneurship center, we need to have great talent, and that great talent is at UIUC,” Tebbe said.

While the discussion was in-session, a powerpoint presentation simultaneously displayed images of Chicago’s beautiful cityscapes, as well as facts and figures relevant to the topics being brought up. An infographic titled “Digital Employment Growth” showed the massive jump of people employed in the tech industry from 33 thousand people in 2012 to 54 thousand people in 2015.

“Chicago has the most diverse economy in the United States of America,” said Emanuel. “If you’re thinking about where to branch out, I want you to see the city of Chicago, and what’s happening today, and the real opportunities you can put your roots down in.”

In terms of urban living, Chicago, compared to New York City, is approximately half the index cost of living in a major city. For near-graduate students, it’s a much more affordable option, especially if a job is in the near future.

“What I love about Chicago is that it is a very supportive community, and people go out of their way to help each other succeed,” said Novack. “I think that Chicago has always felt a little bit like an underdog and that we don’t get enough credit for what we’re doing, so therefore, we’ve all come together and really fought to help each other.”

Building off the idea of camaraderie among different businesses within Chicago, Gladwin discussed the advantages of creating a team in Chicago.

“You can hire a level of talent that’s significantly above anywhere else, and schools like UIUC are a big part of that,” said Gladwin. “You can build teams of people where they really get to be genuine friends and develop a discipline of knowledge which is second to none. For that kind of work, I’ve found Chicago to be the absolute best place.”

Gladwin also said by building these kinds of teams, it generates genuine lifetime friends that make for a great company and a better

“I think that Chicago has a lot of great opportunities for young entrepreneurs, because there’s so much to do there, and there’s so much based in the city. It gives a lot of people the ability to find internships and jobs,” said Madeline Dolinsky, freshman in LAS. “In regards to this event, you can talk face to face with people, which is really helpful for students in getting to know companies based in Chicago a little bit better.”