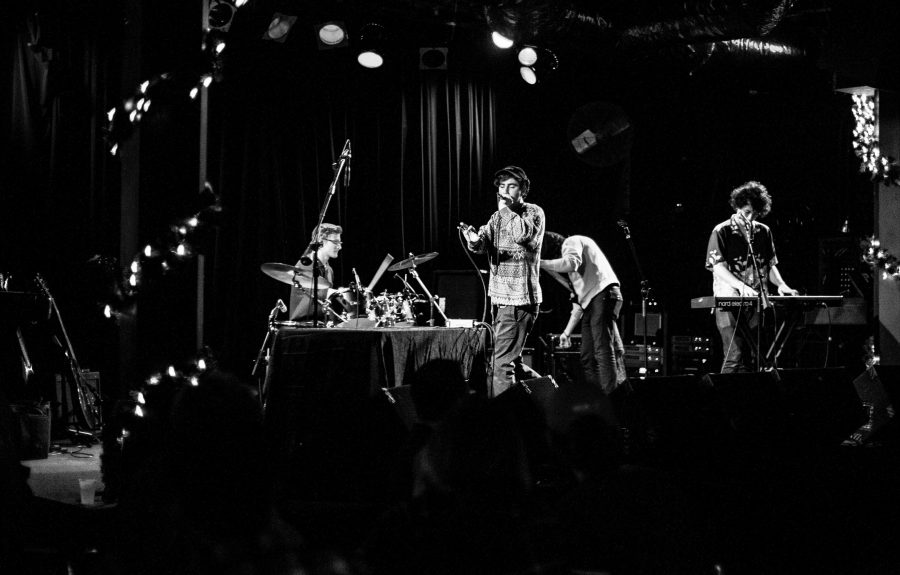 Willie Main, also known as the up-and-coming solo artist Swill, is a senior in LAS at the University. When he’s not focusing on school work, Main spends a great deal of his time making and producing his own music — his sound is best described as melodic contemporary rap. His music is on SoundCloud under the name Swill.

The Daily Illini took a moment to speak with Main about what it’s like managing a solo career and being a student at the University.

Daily Illini: How long have you been making music?

Willie Main: For a while, I was in a band in eighth grade, but that kind of fell off in high school. I didn’t lose interest in music, but I just wasn’t pursuing it really. Then I decided to pick it back up around my sophomore year of college.

DI: Are you a solo artist or do you ever work with other people?

WM: Technically, Swill is just me, but I work with people all the time.

DI: When did you first become interested in or involved with music?

WM: I guess I’d say I became passionate about music, like I said, during my sophomore year. I decided that (I) really wanted to do it for real. I started doing this rap thing just when I was with my friends for fun during high school, and we’d freestyle with each other — stuff like that. But then it turned into me really wanting to make songs, and so around the time I was a sophomore, I wanted to come out with a project that would solidify myself by saying, “Hey, I’m taking myself more seriously now.”

DI: You mentioned before that you played in a band — what instruments do you play?

WM: I must have gotten my first guitar in fourth grade, so I’ve been playing that for a long time. From there, I’ve dabbled with piano, and drums and bass, but with Swill, I mostly produce my own stuff and that’s mainly all on the computer. You also need a decent amount of technical piano knowledge when you’re making music with that kind of stuff. So yeah, guitar was my first thing and then I started doing some voice stuff. I’ve never been an amazing singer or anything like that, but I try to be melodic with my voice as much as possible.

DI: Can you elaborate a little more on the technology that you use and how you create your music?

WM: I use a software called Ableton, which they call a DAW, but it’s like Garage Band — everyone knows Garage Band. Basically, my process is different every time. When I first got into it I would sample a lot, meaning that when I would hear something from a song or a movie even, I’d byte a piece of it, and then from there, I’d put drums on top of it. Now, I try to play stuff on the piano and make actual different parts of songs. When it comes to what I’m doing with my voice, sometimes I’ll just hum a melody first and then I’ll write the words for it, or vice versa — it really depends.

DI: Who are some other artists that you’d not necessarily compare yourself to, but whose sound you’d like to work more towards?

WM: I’ve really been messing with this guy Smino, he’s from St. Louis, and I don’t want to compare him to Chance (the Rapper) or something, but everybody kinda knows what I mean when I say that ’cause Chance is really melodic with his raps. Smino is really cool though, and he’s out of St. Louis but works in Chicago mostly. There’s this other artist Trappo — these aren’t people I always necessarily listen to, but are more artists I aspire to share a similar sound — who’s similar to Smino. They’re both very soulful, which is the way I’d put it I guess, and are also really good at creating melodies that are great for their voices. I feel like people sometimes neglect the voice as an instrument, so it’s really cool if you’re able to keep everything with the production so minimal and then do a bunch with your voice.

DI: Apart from your own music and your sound, who would you say is one of your greatest music inspirations?

WM: I’m about to sound really cliche, but I’d honestly have to say Chance the Rapper. I’m from Chicago, and I grew up with some of those kids which is really cool. Everything that Chance is doing right now is truly amazing, and the people who are part of his crew like Joey Purp and those guys. I think those kids are really talented, and it just inspires me because I was surrounded by them and was basically able to watch them grow as artists, which is crazy.

DI: How many shows by now do you think you’ve performed, and what are some of the venues you’ve played at before?

WM: As Swill, I’d say about 15 shows probably. I try to do shows as much as possible, because it’s a completely different experience than anything I’ve ever done before. I’ve played at Canopy Club a lot, but as far as around here, I’ve really only played at the Canopy Club or house shows. I also played one time a bar in downtown Champaign called Mike and Molly’s. In Chicago, I’ve played at a couple venues including Schubas and Martyrs. I also do house shows all the time.

DI: What would you say is your favorite aspect of making and producing your own music?

WM: My favorite aspect would probably be that you get to be very much yourself. I don’t really have a particular sound just yet, but it always really bothers me when other artists make a piece of work and then say something like, “Oh this isn’t my sound, this isn’t me, I can’t put this out.” I like that I have the ability to never put myself in a box, and it gives me inspiration and drive to just try new things always. I’m still finding my sound, and I’ll forever be growing as an artist. It’s always good to look back at your old stuff and then be able to say “Wow, I’m so much better than I used to be,” or “Oh, I could have changed this here and here and here,” instead of just standing still.

DI: How did you come up with the name Swill for yourself?

WM: There’s not a great story at all. So my name is Willie, and I used to go by Swill the Will, but I decided that was just too much for my name. The definition of Swill is actually really funny though — it means basically the bottom of your drink, like the spit or backwash that’s left over, and I’m not trying to say anything about my character, or that I’m some dirty person or anything, but that’s just what it means. My mom always gives me a hard time about it, and is like “Do you really want to be Swill?” I just liked the way it sounded though, and then it kind of stuck.

DI: As a student, how do you balance school and your workload with making and producing music?

WM: I really just try to stay organized — that’s the most important thing for me. I find that I work best when I have a lot of stuff going on, so sometimes school is good in providing that. Even if I only have a small amount of time to work on my music, once I’m under that crunch time is when I do my best work. It’s the same with shows — I’m so bad at finishing anything, but once I have a show coming up I’m always like “alright, I gotta finish all these songs.” I think I just work really well under limited time because I know I only have that set time to do what I need to do, and somehow it has to be finished by that deadline.

DI: Do you have any goals for your future in terms of your music career or any projects you’re working on that you’d be willing to share?

WM: The way I see it is that I’m going to get out of school, and then I’ll have a few years to kind of make this whole musician thing work for me. Obviously, I’m finishing school right now, so I do have other interests and expectations, in terms of getting a ‘real job’ and stuff. I know I always want to be involved with music in some way or another, whether it’s working on my own or with others like as a producer or engineer–something like that. As for Swill, I’m coming out with a new project probably, hopefully, in the spring called Project 2. It’s kind of a play off on the idea that project (a specific plan or design) is also spelled the same way as project (to extend beyond something), and it’s about growth.

DI: Because of the current technology available and the way that music is changing with the help of platforms like SoundCloud and Spotify, do you think this has made becoming a musician more achievable?

WM: Totally. I think about it both ways too, ’cause in a way it’s just so overly saturated. That’s the thing with the Internet — anyone can get on there, anyone has access to it, so there tends to be a lot of trash out there as well. For the most part though, it’s so helpful. Before the Internet, you’d need a record label to do anything, so it helps and enables people to put their work out to the public. I think the Internet has only done great things for young kids like me who are trying to make music.

DI: Considering that there is so much new music being released on the Internet currently, what do you think an emerging artist might do to help them stand out against the crowd?

WM: To be honest, it really just comes down to talent. I think the best advice for any artist though is to just work as hard as you can. When I released my first project, it was kind of just like “Hey, I’m taking myself seriously now,” but I wish I could have waited and just perfected it before putting it out there. The way to stand, I feel like, is to just be good, but also be humble and always support your friends around you. The more people you have behind your work, the better, so just show everyone love, because people notice that and want to be a part of that.