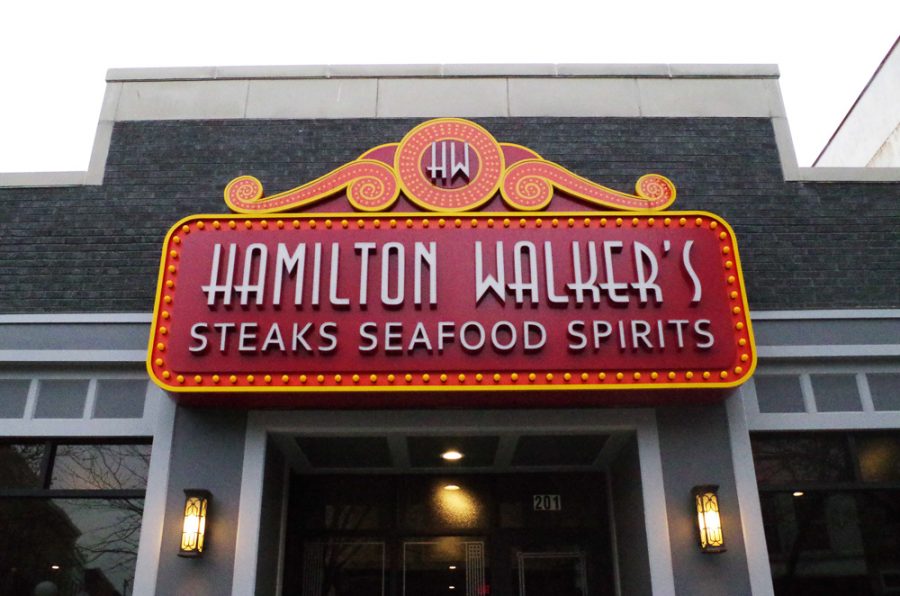 After building up their hunger at an Illini football game in the fall of 2015, Andrew Libman and Christopher Kirby wanted to go to an upscale steakhouse with superior service.

Upon realizing that one didn’t yet exist in Champaign, the two men decided to take action and develop their idea of a high-end, top-quality steakhouse with an added twist.

Libman, Kirby and a third associate went through the Illinois Restaurant Association and contacted a consulting group out of Chicago that September — Creative Hospitality Associates — to help bring their vision to reality.

That vision would materialize into Hamilton Walker’s restaurant in downtown Champaign, located at 201 N. Neil St.

“They pitched an idea to investors, and they jumped on it,” said Zachary Schweig, head chef of the restaurant. “They picked out a location that would be a historic center of the town. They’ve always wanted it to be a gathering place, that’s why they chose the site that they chose.”

The building’s location was originally home to an armory that was built sometime between 1881 and 1884, but was later transformed into the Walker Opera House.

“It was the first legitimate theater in Champaign where all celebrations for the city took place,” said Eric Feltman, one of the restaurant’s projects managers and a member of the Illinois Restaurant Association. “Directly across the street was where they would hold the bonfires for the win of the Illini, and they would go over to the opera house for celebrations.”

After the Walker Opera House burned down in 1917, the Hamilton Hotel was built in its place. The restaurant founders converged the names from the two historic landmarks to create the name “Hamilton Walker’s.”

The historic location is not the restaurant’s only distinct feature; Hamilton Walker’s has a Hollywood atmosphere that aims to immerse its guests in different time periods and provide a one-of-a-kind dining experience.

Kirby, Libman and the third founder collaborated with Feltman and the rest of the Association, and after a little over a year of work, opened their vision to the public on Dec. 14, 2016.

Schweig, who discovered Hamilton Walker’s through social media, was attracted to its uniqueness and the fact that it was not a corporate chain.

“We wanted to be different,” Schweig said. “We wanted to be not just only another place that sold steaks. There had to be a story behind it. There’s a difference in the ambiance than other steakhouses offer.”

The interior decor of the steakhouse was strategically designed to emulate several time periods from the early 1900s. Each room of the restaurant evokes a different feeling — starting with the outside of the building.

“We create a history where we know a restaurant redecorates on average every ten years,” Feltman explained. “The Chicago Theatre Sign came about in the 1920s. So our sign, our logo, our icon, is based on that Chicago Theatre Sign. It’s to feel like you’re walking under a marquee.”

Right as one steps through the doors past the large flashing sign is the Brunswick Bar — a replica bar from the early 1930s with an authentic marble floor.

“All of our cocktails are classic to the era. So when you walk in, you get cocktails you would have gotten in the ’30s, ’40s, and ’50s that are true to form,” Schweig said. “From a menu standpoint, we are very true to form as well with an a la carte steak house, which was very popular in 1940s.”

Meanwhile, the East dining room emulates the old Hollywood Regency period of the 1940s, and the West dining room goes back to the 1930s.

“It kind of transcends you back into that era where you look around you and it’s grand, it’s exciting it’s warm, it’s inviting, that’s what I think we’re going for with the interior decor,” Schweig said. “I certainly feel that way when I step in there.”

In designing the restaurant, Feltman wanted to evoke certain feelings in guests that took the dining experience to another level with the combined dynamic of service, food and decor.

“You get over a billion moving parts,” Feltman said.  “It’s about knowing how to fit it all together and effectively finish with a product that is cohesive and is enjoyable. Dining at Hamilton Walker’s transports you to another place in time; many guest say they feel like they don’t feel like they’re in Champaign.”

“I don’t think Champaign has a good steak house other than corporate chains. I like trying restaurants that aren’t huge corporate chains that have uniqueness, so that attracted me,” Maxwell said.

Maxwell also said that the decor was executed in a good way, with separate rooms and a different theme in every room he felt like there was more privacy.

“It felt comfortable and the service was really on their game,” Maxwell said. “I do remember the wood walls and the crown molding and I thought that looked classy. The bar is its own room, then they’ve got two different dining rooms, and I thought that was nice the way it’s set up. It’s not one big open cafeteria style restaurant, it was kind of segmented.”

Yet despite its distinctive theme and ability to stay true-to-concept, the thing that Hamilton Walker’s is most proud of is the quality of its food.

“One resounding truth is that we’re a steakhouse — we have awesome meat,” Feltman said. “That’s at the forefront of our name, being a steakhouse.”

Maxwell’s opinion on the food was consistent with the restaurant’s goals.

“We liked everything that we ordered,” Maxwell said. “The superior food quality is an important thing for me, and the full-service bar kind of put it over the top. The quality of the meat that they have is outstanding, and that’s what brought me back.”

The restaurant has plans for a lower level buildout to include an authentically styled speakeasy — live music and an exclusive footprint to seat roughly 40 people, requiring a secret password and knock.

Regardless of any changes or additions, Hamilton Walker’s founders want it to be known for its ability to bring people together.

“A resounding sentence that many of the team use quite often is ‘Celebrate What Matters,’” Schweig said, “and what matters is in the eye of the beholder. It’s what you make of the experience. It could be your birthday. It could be gathering for drinks after work. It could be meeting an old friend. We just provide the place and the grounds for people to celebrate what matters.”