‘Being There’ embodies politics, power at Ebertfest 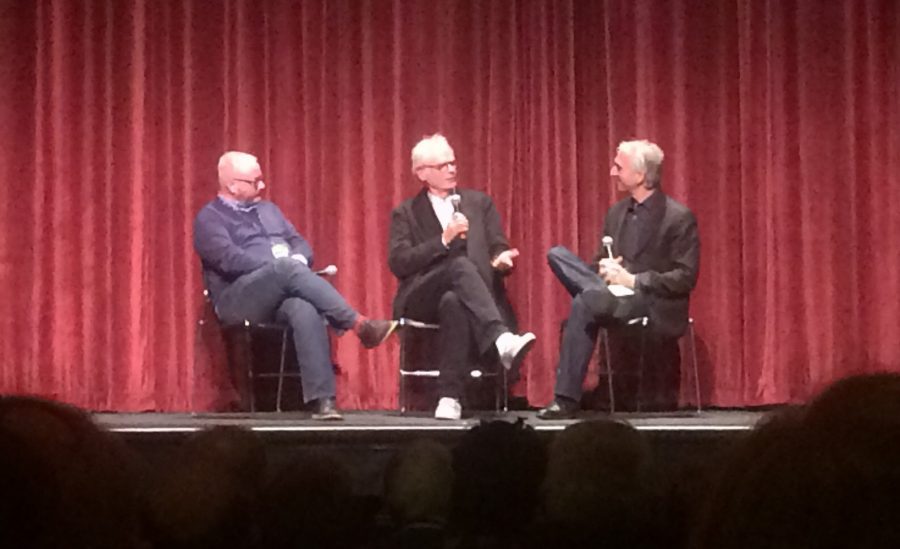 Nate Cohn (left) listens as Caleb Deschanel recounts working as a cinematographer on the 1979 film, “Being There.” Deschanel at first denied political themes for the movie, but he later admitted to the film’s prevalent power and political motifs.

He is entirely dependent on others for his care, as he was educated solely by television. He cannot read , write or prepare food for himself. Chance’s boss and caretaker dies, and he is left homeless and alone. He encounters a wealthy family following a minor accident and is consequently provided with shelter and food.

Despite his obvious mental impediments, the family is oblivious to any peculiarities. His association with the wealthy, influential family earns him political influence. He then is able to meet with the president of the United States and have a television interview.

Although the film is layered with tactful humor, the story is quite sad. It aimed to parody and exaggerate white privilege, but this fictional story was not far off from reality. White people born into rich families frequently achieve high ranking positions regardless of their competence.

Caleb Deschanel, the film’s cinematographer, hosted a Q&A after the movie. Deschanel said the film was not meant to be political.

“It is a film about the human condition and how we see our lives,” Deschanel said. Regardless, there were prominent political and ideological undertones. The satire against white supremacy was overt. Shortly after James loses his home, he passes some graffiti that reads, “America ain’t s— cause the white man’s gotta God complex.”

This message is irrelevant for the illiterate James, who cannot even comprehend the message, and parallels the reality in which he is entirely unaffected by systematic racism. The only person who is keen to James’ mental disabilities is his former caretaker, a black woman named Lois. Lois sees James on television after his “insightful” interview about his conversation with the president.

Lois said, “It’s a white man’s world in America. All you have to be is white in America. You get whatever you want.”

Deschanel said he was embarrassed about how true many of the racial scenes still are, and how in 30 years, nothing’s really changed.

In this way, the movie highlights two sad realities of American culture — white privilege and a general disregard for the prevalence and severity of mental illness. Although James consistently benefits from his white privilege, it is troubling that he is put into a position where he would have to fend for himself after the death of his boss.

The portrayal of James’ cluelessness does not act as a mere dismissal of mental illness; it serves the purpose of showing white ignorance and men’s infantile dependence upon women for basic self-care. The critique is placed upon the members of the upper class who are oblivious and self-absorbed. They fail to recognize that the man they refer to as “Chauncey” is in genuine need of help, so much as realize that his name is actually James.

The film’s emphasis on television was almost prescient. “Being There” was created almost 40 years ago, but the way it handled the theme of entertainment is still relevant. James’s inability to read the newspaper reflects contemporary attitudes toward receiving news and information outside of visual and auditory sources. His fixation on television screens foreshadowed Americans’ current absorption in televised media.

The movie is far ahead of its time, and the commercials and shows that were displayed on James’ television effectively captured the zeitgeist of late ’70s television.

There were ample instances of bad advertising, along with scenes from workout shows, “Sesame Street” and “Mister Roger’s Neighborhood.”

The film’s criticism of white privilege comes full circle by the movie’s conclusion. In the final scene, James walks on water, and his embodiment of white supremacy is most overt. Preceding this event, a group of wealthy men in attendance at a funeral discuss the possibility of James becoming president. James, who has benefitted to the fullest extent from his white privilege, is given godlike capabilities.

After the film, Deschanel discussed his experience with being a cinematographer. He was involved in the cinematography for numerous movies, such as “Passion of the Christ” (2004) and “The Black Stallion” (1979). Deschanel has experience as a director for television shows, including “Twin Peaks” and “Bones.”

Deschanel said he was wary of watching his old work and seeing the mistakes he would make. In regards to “Being There,” he drew attention to the way in which the majority of scenes were shot at eye level and with little camera movement in order to ascribe realism to the scenes. Deschanel said he was opposed to moving the camera merely for the sake of moving it.

Although Deschanel initially said the movie was not meant to be political, he retracted this statement.

“The film’s really about power and politics,” Deschanel said.