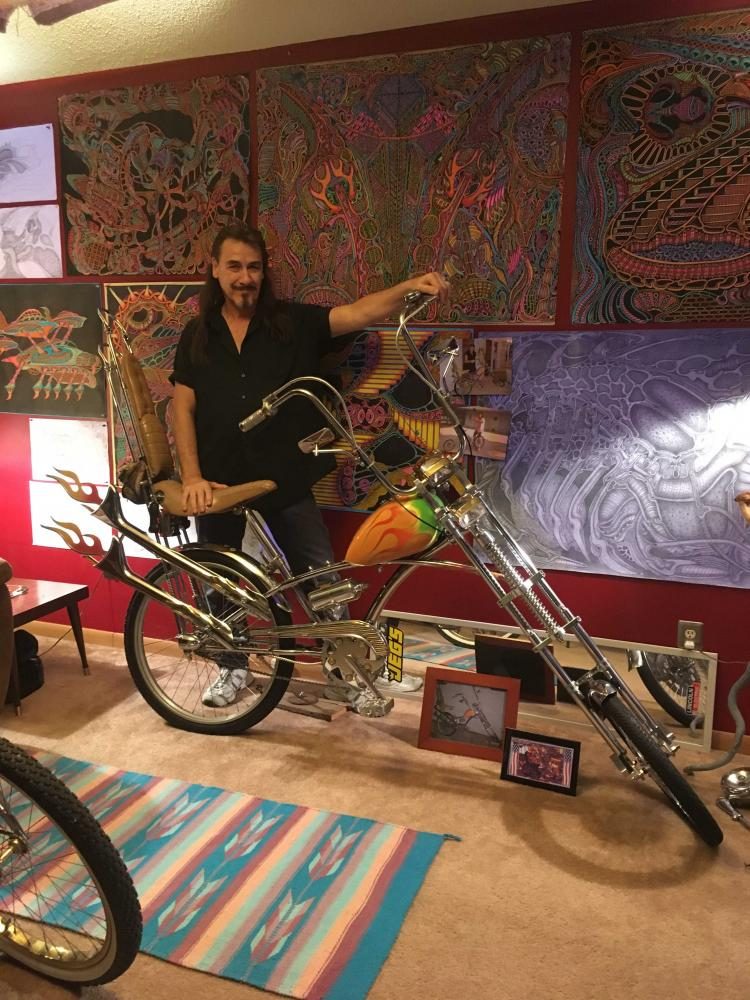 Mark Roberts, an Urbana resident, with one of the many bicycles that he creates. Roberts showcases his artistic ability through his bikes, as well as his collection of sketches and paintings.

Mark Roberts is a normal guy.

He’s a retired truck driver, has been married over 30 years and lives in a ranch on a residential street in Urbana.

But when he brings out his bicycle, which resembles a 1960s chopper with chrome details and metal flames shooting out the back, his neighbors and anyone passing by know he is one of a kind.

Roberts is an artist, and not many people besides his close friends and family know about his creations. He doesn’t do it for the money or recognition; rather, he does it for himself. He’s been drawing sketches, collecting and repurposing old things and designing bicycles like the one with the metal flames since he was 13.

At first glance, his bicycles look exactly like motorcycles. Roberts is obsessed with the muscle bikes, Stingrays and crate bikes from when he was growing up in the ’60s. They are the choppers he saw while on the road with his foster dad, who was also a truck driver.

Roberts had his own motorcycle at one point, but switched to strictly bicycles when he got married.

“I had a motorcycle when we got married but she says, ‘It goes or I go,’ so the bikes went,” he laughed.

Roberts’ bicycles look so much like motorcycles that it confuses people all the time. He said that young children will cover their ears when he rides by and he was once even stopped by a police officer while riding on the Constitution Trail near Normal, Illinois.

“A police car comes and stops and ‘WEE WEE, you can’t ride motorized vehicles on the trail!’ And I said, ‘Oh, this is going to be good,’ so I pulled up right next to his door and he goes, ‘That’s the coolest bike I’ve ever seen! Oh my God I thought that was a motorcycle!’ I said, ‘No dude it’s got pedals,’” he said.

Roberts has put years and thousands of dollars into making the bikes. He finds the parts in motorcycle catalogs and from junk people leave out on their curbs.

“Anything he touches, he is artistic. He can get anything old and make it new,” said his wife, Carmen Roberts.

The bike with the metal flames is Roberts’ favorite creation.

“Matter of fact, I’ve never built anything like that. It’s the jewel of what I own. That’s my baby,” he said.

The other bikes, which feature lots of chrome, tan leather and denim, are now on display in a room in his home. They are surrounded by some of Roberts’ psychedelic and neon-colored sketches. It’s the ’60s on full blast.

“The artwork I’ve been doing my whole life. I’d get bad grades, but they’d say, ‘Someday this guy’s gonna be a great artist,’” he said.

Champaign resident and artist Alan Welch has been friends with Roberts since he was a kid. He said he remembers him doodling on stuff at restaurants and bars.

“He’s immaculate and detailed,” Welch said. “He sees art in everything.”

While some strangers have gotten a glimpse into Roberts’ life when they see him riding his bikes, there is another aspect of his artistic ability that is much more unknown.

There are two rooms in his home that capture a little piece of his soul.

For a stranger walking in, they will find themselves surrounded by feathers, toy cars, plants, walking sticks, piano keyboards, action figures and a whole lot of nostalgia. There are little alcoves filled with family pictures, a fluffy bean bag with stuffed animals and intricately painted guitars and shoes peeking out.

There are few ways to describe it fully. Roberts himself calls it the “wow factor.” Welch said he was blown away when he saw it for the first time.

“My own stuff comes from my head,” Roberts said. “I didn’t copy this from nothing.”

Even though he has amassed such an extensive collection of things, Roberts said he could part with it all tomorrow — everything except his keyboards, which he has been acquiring since a young age, and his sketchbooks.

Carmen said even after 30 years, her husband’s art never ceases to amaze her. She discovers something new every time she walks inside the rooms.

“I think it’s the rooms themselves. They are who he is and they are his art,” she said. “Every little thing has a story.”

However, she joked that sometimes his items will creep into the decor of the rest of the house.

“I like things a little less on the wall and he will bring something out and I’ll say, ‘Take it back!’ Or I’ll say, ‘You added something,’ and he’ll go, ‘Do you like it?’ and I’m like, ‘Yeah you can keep it out here.’ He can’t see a blank wall. It has to be covered with something,” she said.

Carmen always tries to convince Roberts to show off his art. Once while living in Bloomington, she talked him into entering an art show for his walking sticks. To his surprise, he ended up being on the front page of the newspaper. Carmen knows, however, that her husband doesn’t need this kind of validation.

“He grew up with not a lot, so now those are things that mean a lot to him. And those things put up and his rooms set up like they are, that’s his comfort zone,” she said. “When he’s stressed or just wants to chill, that’s where he feels homey and most comfortable. It’s nothing special in there; it’s all of it together. That’s who he is.”

Welch agreed, explaining the connection Roberts has to his work.

“He holds it close to his chest because he doesn’t want to lose it,” Welch said.

Sitting on a swivel chair in the middle of a beautiful mess, Roberts wears a black T-shirt that reads “Vintage Dude.” He is in his element.

“I’m so disconnected from out there. I just have a home; I don’t go around and party and go to bars and do drugs. This is my thing,” he said. “I like being by myself and this is what I create.”