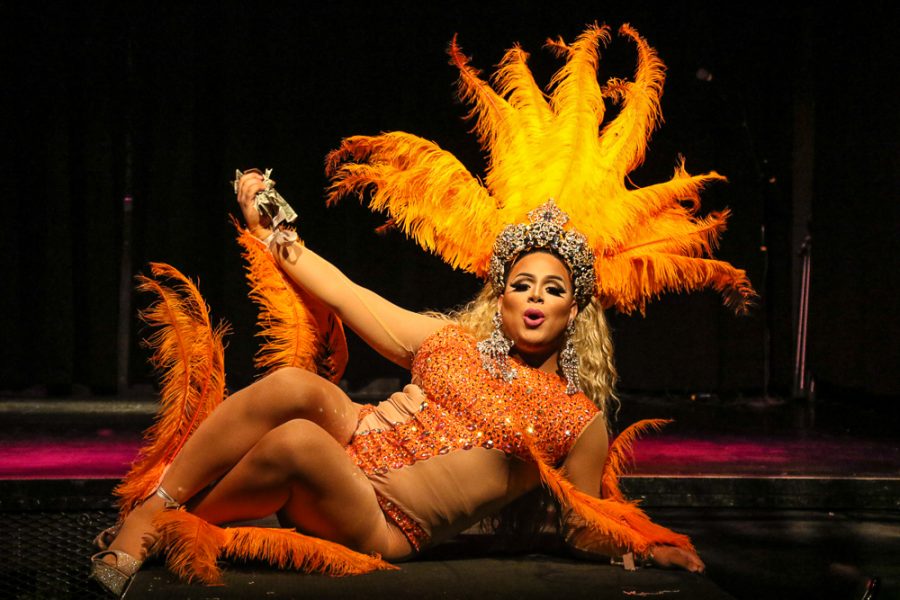 It takes Alexandria Diamond two and a half hours to prepare for a drag show, but that didn’t come as much of a surprise once the audience saw her bright-orange feather get-up, seven-inch bedazzled heels and her intricate makeup.

Diamond started off as a backup dancer, but her choreographer was a drag queen and recommended that Diamond give it a try. She has now been performing for 4 years, and said that the makeup and the glitter is her favorite part about performing.

“It’s like a fantasy. It’s like a dream that you’re living in,” Diamond said. “You get about a couple of hours, you dream it, you take it off and then you do it all over again.”

Diamond performed this past Saturday at 51 Main, a bar in downtown Champaign that is now hosting monthly drag shows. The show features queens from all different cities, including performers who are locals as well as those from cities like Chicago and Indianapolis.

The shows have a heavy aspect of raunchiness to them, with all types of dirty jokes, the occasional lap dance and plenty of singles thrown from the crowd. Each queen had her own look, wearing her high heels, glitter and makeup.

Their performances consisted of lip syncing to pop songs, and a variety of dance moves including twerking (some even pulling the splits). Queen Apollo Summers had a Halloween spin to her performance. She was decked out head to toe as a scary clown, mouthing words from the popular Stephen King movie, “It.”

The shows used to be held at the Chester Street Bar, but due to their recent closing, the shows have been moved to 51 Main this past September.

Rod Sickler is one of the owners of 51 Main, and chose to start hosting drag shows because he wanted the place to have a wide variety of entertainment.

Sickler said drag shows are great for the Champaign community because they bring a sense of openness, and are completely judgement free.

“This is our world now,” Sickler said. “People need to understand that it’s not gay, it’s not straight. It’s for everybody. This is how the world should be … That’s what I love about the drag shows.”

Amy Myers is the show director and the party promoter for the drag shows. She emcees the shows and coordinates other parties as well.

Myers said she decided to bring the shows to Champaign because she wanted to promote them to the mid-Illinois area. Usually when people want to see drag shows, they have to go to big cities like Chicago, and she explained that they are much more scarce in smaller towns.

“It’s just something that we need,” Myers said. “We’re not Chicago, we’re not St. Louis. But with the community here and the diversity here, we need something like this.”

Myers has been working in the business for 25 years and said that drag has become increasingly popular since she first started. It used to be known as something taboo, but is now more widely accepted and popular amongst all age groups, genders and sexual orientations.

“With it being on television, with people seeing it more, I think there’s more exposure,” Myers said. “Especially to the young kids.”

Chamilla Foxx is a Chicago performer and has been working as a drag queen for the past nine years. This week she performed in a vibrant red outfit, covered in roses.

Foxx used to always walk around her house dressed in bed sheets. But once she got older and realized that people could cross-dress as a legitimate career, she decided to give it a try. Foxx emphasized that drag is important for younger people in the C-U community because it gives them someone to look up to.

“(Drag queens) could mean a lot to kids who are here that don’t have role models to look up to,” Foxx said. “When I was younger I looked up to drag queens and was like, ‘Oh my god, they’re so cool. They have their own style.’ Maybe we can be that for somebody else.”

What Foxx wants people to know about drag is that it is not just meant for the LGBTQ community. It’s entertainment, and can pertain to all genders and all age groups.

“When I was younger, I thought drag queens were just like obvious men who looked like clowns — it’s not like that,” Foxx said. “There’s actual beauty in drag. The performers are beautiful. We have to be top-notch every time we’re performing. I want (the audience) to appreciate all the work we put into it.”