Springer Cultural Center hosts “All in the Family” art exhibit 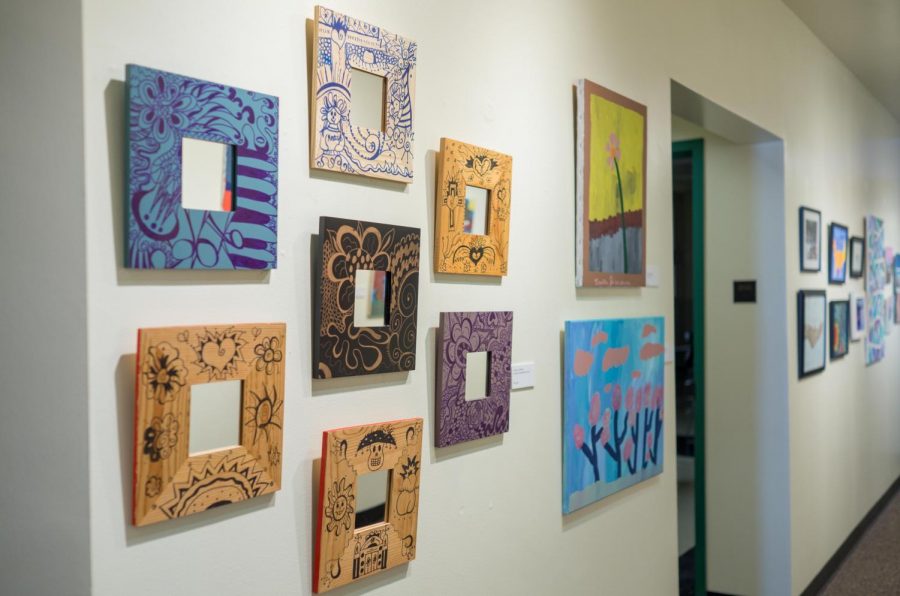 The art exhibition All in the Family was held at the Springer Cultural Center located at 301 N. Randolph St. on Oct. 16, 2017. The exhibition, features the art pieces were created by The Widholm Family. Three Generations of Artists will be open to the public until December.

Art exhibits provide ways for artists to present their art, or their voice, to the world. The way that art is presented speaks volumes for the Widholm family, conveying a very clear message: Family.

The Springer Cultural Center offers a venue for both local and regional artists to display their work in exhibits. These exhibits provide artists with ways to showcase their talents to audiences of all ages, giving patrons the opportunity to learn about new perspectives and ideas.

The exhibit currently on display is titled “All in the Family,” as it displays the artwork of three generations of artists within the same family. The exhibit will be on display through Dec. 1.

“Eleven of us (in the exhibit are) from three generations within the same family,” said Katrina, a visual arts teacher at Countryside School in Champaign. “I thought it’d be fun to do a show with my uncle, and eventually everyone else wanted to do it too.”

Many of the artists’ works appeared to have their own theme or message that they wanted to convey. For example, much of Katrina’s works reflected themes of Latin America, such as “Vallarta” and the series “Mi Corazon”, as well as photographs taken in Ecuador.

“We lived in Puerto Vallarta, Mexico, for three years,” Katrina stated. “I taught at a bilingual school there.”

In addition, she has contributed several abstract works, including a work titled “Glow”, “Giraffe”, and a series called“Fall Leaves.” She has also decorated mirrors which hang in a series titled “Stream of Consciousness Series,” all of which are on display in the exhibit.

Former professor Jack M. Widholm, of the Department of Agronomy, which has since been renamed the Department of Crop Sciences, also contributed to the exhibit. He provided gourd birdhouses as well as a print of a tissue culture from a soybean leaf, derived from his research.

“I like what I call ‘Natural Art,’”Jack said. “I spent my life growing things, hence the gourd birdhouses.”

Several of the artists are young as well; Sofia Widholm, Katrina’s daughter, is nine years old and is already having her artwork displayed.

“I was inspired by my mom,” Sofia said.

Sofia explained the inspiration behind her passion for art, one of which includes photography. Her picture of a horse’s saddle called “As I Ride” hangs next to her sketch titled “Eye.” In addition, she also decorated a series of mirrors, titling them “Spring Blossoms,” all containing floral patterns and imagery.

“She’s more into drawing and art than I was at her age,” Katrina said.

Sofia is not the only young and upcoming artist. Miles and Maya Widholm, ages nine and 11 respectively, both made contributions to the exhibit as well.

Jenni Hartley, Tiegan and Kaia’s mother, discussed the story behind Kaia’s photo, explaining that it all began with a Polaroid camera.

“It was fun to inspire her and give her a way to look at things differently,” said Jenni.

Jenni also contributed a photo series titled “Cousins looking at art,” which contains several candid pictures of her family examining different works of art in museums all across the country.

“Any trip we take, we take a photo for the series. It started spontaneously, and it just grew from there,” Tiegan said.

The “All in the Family” exhibit at Springer Cultural Center brings forth new ideas and strong themes of family and culture, emphasized through the different works of both the Widholms and Hartleys.

The hard work and passion put into these works were appreciated and reflected upon through patrons who came and went throughout the duration of the exhibit.

“I feel like we are a very colorful family and we try to be positive in the work we display,” Katrina said.