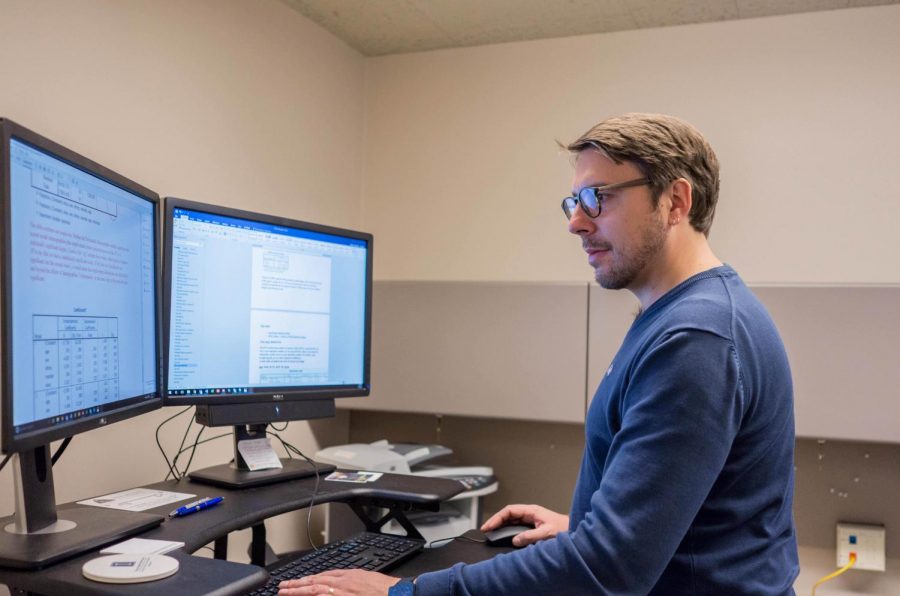 Portrait of a new professor, Dr. Alessandro Rigolon, in Department of Recreation, Sport and Tourism on Nov.6, 2017. Dr. Rigolon is teaching an online course RST 593 this semester and will teach RST120 in the Spring of 2018.

Coming to an environment with 50,000 other people can be daunting. With a large campus comprised of over 15 colleges, almost 700 total buildings and students from over 110 countries, it’s not always easy to adjust.

Incoming freshman or transfer students are not the only ones who need to get used to this new territory, faculty members do as well.

RST professor, Alessandro Rigolon, is new to the University. He moved to Illinois from Los Angeles in July after being invited to apply to the University and accepting a position. Although he is currently only teaching one online class, he will teach an in-person class during the spring semester.

Starting as a new teacher at the University is a special opportunity for Rigolon.

As a first-generation college student, he feels fortunate to have received an education through a Ph.D., and to now teach a new generation of students.

“We are very privileged to be teachers and researchers,” Rigolon said. “I think I can much better understand what first-generation college students go through compared to someone who has an academic history in the family.”

Rigolon was eager to come to the University after learning about the school’s prestige. Yet, he knew it would present more challenges as a new teacher.

“There are much higher expectations in terms of research and grant-making than where I was before, but I was up for the challenge, and I came here knowing the challenge and embracing it,” Rigolon said. “It’s something that stimulates me to grow as a professor, as a teacher and as a researcher.”

Rigolon wants students to understand that although professors are held to a certain standard and are seen in a certain light, they still experience many of the same concerns students do.

He said new professors can be especially nervous.

“You can hide if you’re one of the students, but you can’t hide if you’re the professor; we come prepared and we’re excited for the opportunity to be that one person,” Rigolon said. “It’s exciting, but it takes a little to get to know each other.”

Matthew Stasiewicz, a third-year assistant professor in the Department of Food Science and Human Nutrition, described similar challenges coming to the University as a new faculty member.

Stasiewicz, who works in applied food safety, said he likes the feel of a large land-grant institution and the opportunities it provides.

However, coming to such a large university presents itself with a difficult transition that Stasiewicz said is similar to one that students may go through.

The expectation to transition from working under the guidance of others to being the leader himself was not easy. He felt the need to step up his performance as a faculty member and had to re-adjust entirely.

“It’s hard to be uprooted again from the social structure,” Stasiewicz said. “I was in my network for eight years, then had to get used to it all over again.”

Stasiewicz said there is a pressure as a new teacher to deliver perfect courses. With high student expectations, he tries to hold himself to certain standards to deliver.

He said many students assume the course they are taking is perfect because the faculty member teaching it also is perfect.

“In reality, many (professors) may be designing their first course when they teach you, so they’re probably just as uncertain as the students,” Stasiewicz said.

Mutha Gunasekera started teaching at the University in August and currently teaches a few chemistry courses.

Gunasekera said he uses the first day of class as an opportunity and challenge to engage students in the scientific field.

“I work hard to recruit people for sciences and keep them in sciences for their careers,” Gunasekera said, “So I think the first day of class is the best day that I can convince them.”

Although he still had to get used to a new school, Gunasekera, as well as Rigolon, credits the faculty for helping him transition and learn the ropes of the campus.

Rigolon said it is important to him that he is in a department with colleagues who are great researchers and teachers he can talk to every day. He said being mentored by the senior faculty is also very important.

According to Gunasekera, a large student misconception he works to clear is that professors don’t have time to help students in their free hours. Especially being a newcomer, he aims to show his students his dedication to their success.

He said professors like when students come to office hours because it’s their job. Gunasekera would rather have students get help and use his time.

Stasiewicz said new faculty are very often just as confused and overwhelmed by the social environment as freshman.

“In that sense, we’re trying to get by, to make friends and (to) be away from our family and at the same time perform,” Stasiewicz said. “Students kind of assume that we have our lives figured out, but new faculty are still trying to figure out their life and social life all again.”

Despite the hurdles he faces as a new professor, Rigolon believes the University is the right environment for him to pursue his professional and personal goals. He said it is a place where there is research that can change the world.

“Breathing that environment just pushes you to do more and broadens your horizons,” Rigolon said. “It’s a cross-section of the world, this campus, in terms of where people are from and what people do. You can find pretty much anything you want.”