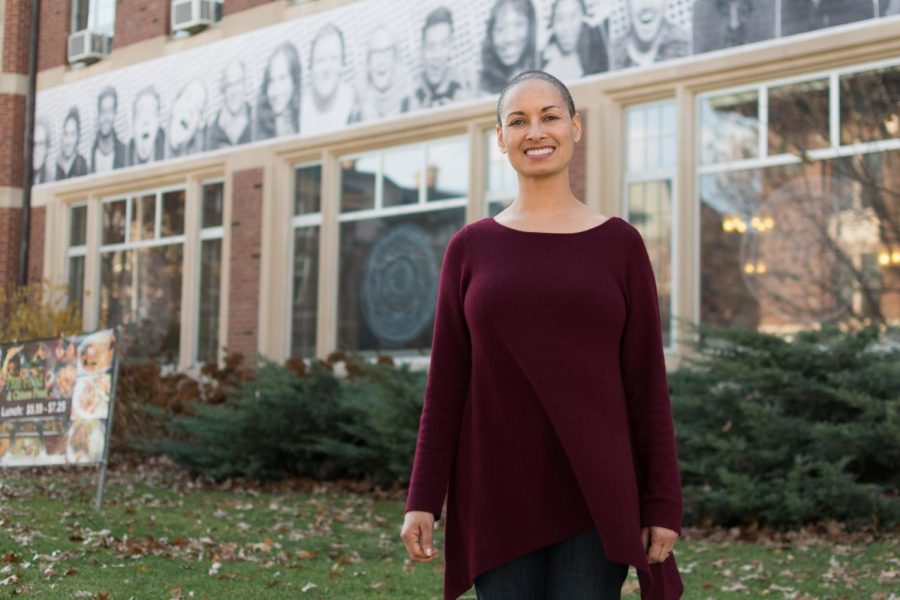 Rebecca Ginsburg works with the Education Justice Project located at the YMCA. Here, she poses in front of the University YMCA.

He worked for a security company called New Life Self Development Company. In fall 1994, a security guard from the company was attacked by gang members. Two days later, one of those gang members was shot twice in the head. Harvey was charged with murder and he was later sentenced to 40 years in prison.

When he arrived at the Danville Correctional Center, he was so anxious and ridden with guilt that he couldn’t get himself to pursue an education in the prison. But eventually, he did. The only problem was the classes were not interactive, and eventually, he had taken all of the available courses.

Then the University launched the Education Justice Project.

The Education Justice Project is a program that allows the incarcerated to gain college credit while imprisoned. The project is taught by actual University professors and graduate students, with the same curriculum from the University.

The program began in 2006 by co-founder and Education professor Rebecca Ginsburg. She was involved in similar work when she attended grad school at UC Berkeley and decided she wanted to continue it at the University. She found a group of people who were interested, and together they started the program.

“One of the things that’s kind of incredible to see is how many people find the same purpose and meaning in expanding access to quality education to people behind bars that I do,” Ginsburg said. “There’s no way that this could’ve been accomplished without dozens and dozens of people.”

The program started off small with reading groups and four-credit courses. Now there are 12 programs within the prison, including courses, several workshops and a computer lab. There are also three community programs, with a scholarship program, letter writing and a re-entry guide to help with the transition out of prison.

Ginsburg said the goal of the organization is to provide higher education for the incarcerated and to better their lives for after prison.

“Students (say) that they appreciate that the (Education Justice Project) program came along and helped them move further in the direction that they wanted to be moving along anyway,” Ginsburg said.

Recently, the program received a $1 million grant from the Andrew W. Mellon Foundation. With this grant, Ginsburg has a few plans to improve the project, one of which is to create a way for people to receive degrees while in the prison.

The program is volunteer-based. Education Justice Project accepts applications twice a year from professors and grad students who are interested in teaching within the program. Undergraduates can also get involved, but are not allowed to teach. Instead, they can participate in other aspects, like letter writing and internships.

Ginsburg said there are about five students now in grad school because of the Education Justice Project, and some are even planning on becoming professors.

David Harris is the director for college programs at the Danville Correctional Center and helps coordinate the project within the prison. Harris said what he likes most about the Education Justice Project is the classes are college-level, meaning they have the same curriculum as the University.

“It’s programs like these that I think really play a crucial role in helping move people from the context that they were in before which led them to being incarcerated,” Harris said. “Then onto another context when they get out that’s more constructed and goal oriented.”

Over 20 years after his time in the prison, Harvey said the project gave him depth in his education and provided him with interaction with other students and professors. Not only that, but it humanized his time in prison.

“A school like U of I or Education Justice Project, it allows you to regain your humanity,” Harvey said.

Harvey is now the founder of Ex-Cons for Community and Social Change. He published a book called “Men on the Inside — Observations of Deviance: 13 Prison Character Types” about the behaviors men use in the prison to regain their humanity.

“The brothers who were incarcerated — me included — we destroyed the community,” Harvey said. “I think it’s our job to heal the community.”