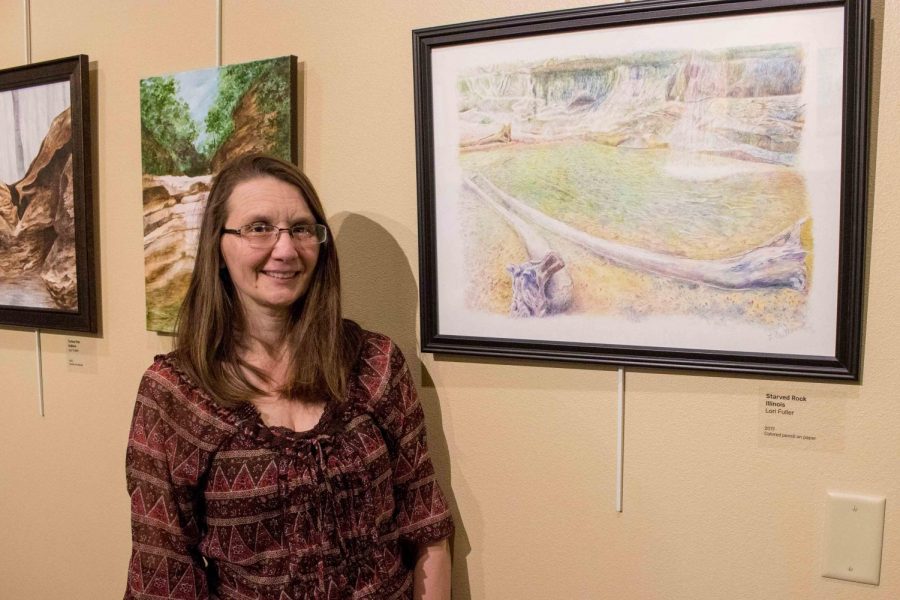 Lori Fuller poses in front of her artwork showcased in Presby Hall’s Artists’ Alley. Fuller enjoys creating art that reflects the world around her.

It’s a couple steps to the side of the main stairwell of Presby Hall. There, Lori Fuller’s world is on display.

A row of canvases hang against the otherwise plain, white wall of the lobby.

“The majority of my paintings and drawings are from hikes outside,” Fuller said. “Since I started drawing more, I’ve become more aware of the details than I was in my earlier work.”

Fuller, a supervisor at the University Office of Admissions and Records, is the spirit behind the exhibit “Beyond the Landscape,” which opened last Monday at Artists’ Alley. The gallery, sponsored by the McKinley Foundation, marks its fourth show since its inception in 2017.

The venue shares its address with Presby Hall on John Street, a connection that Paula Hancock, executive director of the McKinley Foundation, hopes will revive an appreciation for the arts among Presby’s residents.

“I like to think of (Artists’ Alley) as a physical representation of bridging the gap between students and the community,” Hancock said.

Though the aisle of drawings that make up “Beyond the Landscape” is no longer than a couple of yards, Fuller surrounds the airy wisps and contours of her work with a grandeur, lassoing the viewer into an expansive realm of reality and imagination.

A pool of pristine water beams a reflection of trees up toward the sky, straddling the horizon. Jagged wrinkles along with a sheet of rock harness a feeling of wisdom. A splintering layer of wood creeps toward the forefront of a rugged landscape, dragging with it shadows of mystery and intrigue.

Hancock can’t help but sense emptiness without artwork such as Fuller’s to excite the building’s decor.

“When (the art) isn’t there even for just one week, maybe when one show has ended and another one’s starting, it just looks so blank,” she said.

It’s this longing sentiment that inspired the Artists’ Alley to hold its first exhibit last year, “Flowers From Our Garden, II,” which displayed photography by Bill Capel.

Capel heard about the foundation’s search for artists through his own membership at the McKinley Church.

For him, the opportunity didn’t speak to any fantastic muse as much as it did to the memories of his childhood.

“I was just being a kid,” Capel said. “I got a Browning camera and developed my own film — stuff like that.”

The tiny locale seems tailored to these sorts of simple, yet delicate, emotions. For the short time it’s been operating, the Artists’ Alley has lent a unique, intimate setting to creative individuals and their audience, revealing the more personal sides of the two.

For Hancock, the immediacy makes for a great attention-grabber.

“It’s a way for these artists to expand their presence and not just have one or two pieces in a larger show,” she said.

Anna Bielinski, junior in Education, is a resident at Presby who has embraced the dialogue unfolding between artists and students.

She feels as though the artwork offers a form of generosity to the building’s atmosphere; whether she’s strolling through the commons or hitting the books in a silent study space nearby, her focus gravitates toward the rays of Fuller’s vision.

“It’s very welcoming,” Bielinski  said of the gallery. “The colors have this warm tone that brightens up the room.”

While each of Fuller’s images offer an enchanting discovery to those who see them, Fuller is no less awed by the travels that inspire her.

Having practically grown up outdoors, she craves adventure in her life, a calling that’s carried her to parks in various states, from Illinois and Missouri to North Carolina and Montana. Fuller doesn’t always know what to look for, but often, it’s uncertainty and patience that fuels her most productive spurts.

One of her most recent projects, a drawing of a sunflower, has provoked her to contemplate on what beauty such a tiny plant can behold.

“I never knew until I looked at the sunflower that the center had so many colors,” Fuller said. “I’m able to bring in a lot of vibrant yellows instead of using the same ones over and over again.”

After having a selection of her artwork featured in the Boneyard Arts Festival of Champaign County last April, Fuller was eager to experiment with her presentation and scale down the activity circling her work through her participation in Artists’ Alley.

“It’s a much smaller place than some of the others I’ve exhibited in, but I’m able to bring in a lot of my work,” she said. “It invites the viewer to look at a lot of different images and areas of the U.S. I think with that high-traffic area at Presby Hall, maybe one or two (drawings) might catch the viewer’s eye, and the next time they go through that hallway, another two might catch their eye.”

The schedule for Artists’ Alley following Fuller’s appearance is hardly set in stone. The McKinley Foundation is in the process of seeking out student and adult artists who can fill up the plain white wall of Presby.

Thankfully, Hancock believes that Artists’ Alley will have a steady stream of colors to come.

“We’ve had really positive feedback from artists who have come to look at it,” Hancock said. “I think word-of-mouth is getting out that this space is available.”