Sampson the service dog inspires support for research at University 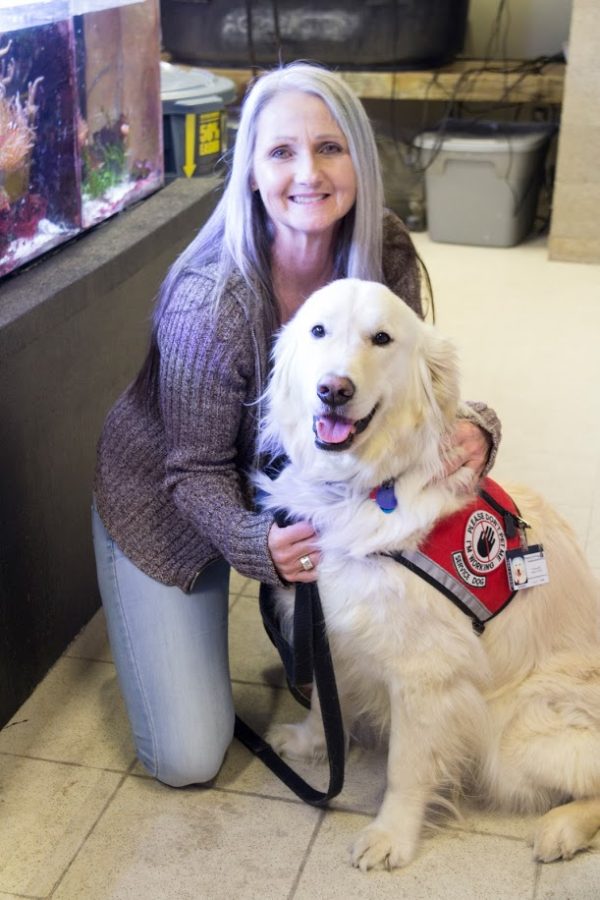 Sampson with his owner at Beckman Institute Marine Lab. Sampson, a trained service dog who works with Joey Ramp, was nominated for the American Humane Hero Dog Award and brings awareness to the impact service dogs have.

To students and community members around campus, Sampson may look like just another friendly dog. But to Joey Ramp, Sampson provides an independence to her life that would not be possible without his assistance.

Sampson, a 3-year-old golden retriever, has been nominated for the American Humane Hero Dog Awards, and he is the first service dog to gain access to a biology and research laboratory at the University.

For Ramp, Sampson’s owner and senior in LAS, Sampson has allowed her to regain control of her life and to pursue her education. Sampson helps her cope with anxiety and panic as a result of her PTSD after suffering a brain injury.

Ramp said the bond between a service dog and their handler is indescribable. Being together 24/7, it’s inevitable to rely on each other for everything, including independence, health and safety.

“Just that bond alone is incredible,” Ramp said. “With Sampson, he gives me independence to get out and do the things that I need to do and want to do in life. He allows me to go to school and to be successful at school. And with that, there comes a level of respect for him.”

Ramp’s own experiences have inspired her to study neuroscience and to conduct laboratory research at the University involving brain injuries and their link to psychological disorders.

She is currently an undergraduate research assistant and hopes her research can lead to information that may help others cope with the psychological effects of brain injuries.

Ramp is planning on conducting a study of the effects of service dogs on rodent behavior and physiology in the future. She received a $50,000 grant from Disability Resources & Educational Services to run a two-year study measuring the impact service dogs have in a laboratory environment. If her research is successful, national models for service dog accommodations could be developed.

She hopes Sampson’s nomination will bring awareness not only to the barriers people with service dogs face, but also to the impact service dogs have on people’s lives to inspire others who may benefit from having one.

“I think it would help bring focus to what we are trying to do in educational institutions, as well as providing a charitable donation to Paws Giving Independence. I am really proud of the dog Sampson is and the things he does and accomplishes,” Ramp said. “I would like other people to see that and to see what a difference a service dog can make in someone’s life and that they can be successful. I love him and I like sharing him with people. He makes people smile.”

All dogs are placed with recipients free of charge. The organization is based in Peoria, Illinois, and partners with Bradley University and Illinois State University for student training programs.

Paws Giving Independence was the organization that trained Sampson for nearly two years. Sampson spent about a year and a half learning basic service dog obedience and exercises and an additional six months doing specialized training to help better assist Ramp.

Following this, Sampson completed 24 hours of training with Ramp, three home visits and numerous skill tests to ensure he was the right fit.

Kirsten Zeman, one of Sampson’s trainers, was paired with Sampson through the Wags for Mags student training program at Bradley University. Zeman both fostered and trained Sampson with her sister, Leslie Zeman. Under their guidance, Sampson learned more complex, service dog-related skills that would later be specialized to meet Ramp’s needs.

For Kirsten, Sampson winning the American Humane Hero Dog Award would recognize the amount of love and energy each of Sampson’s trainers contributed. More than that, it would acknowledge the impact Sampson has on Ramp’s life and the impact he will continue to have on service dog policies.

“When looking for a recipient for Sam, it was difficult to find a placement that would allow him to continue to excel. Sam has a large toolbox of skills with room for many more,” Kirsten said. “Joey’s ambitious lifestyle provides him an environment where he will never stop learning. Sam’s ability to meet the challenge of helping Joey overcome her personal challenges on top of being a role model to change policy is what I believe qualifies him to be a nominee for this award.”

Paws Giving Independence co-director and founder, Donna Kosner, was so inspired by Ramp and Sampson’s partnership that the organization first brought up the idea of nominating Sampson to Joey.

“To us, Joey is just such an inspiration. She is an amazing woman who is just so open about her story and all that she’s been through,” Kosner said. “We just feel they’re such a good team and she’s so good at educating people about it so we thought they would be good to nominate.”

Since Paws Giving Independence is a nonprofit, volunteer-based organization, this money could help assist them with vet bills, supplies, training and custom service dog vests.

One objective both Ramp and Paws Giving Independence share is spreading awareness about service dogs and educating the public about their proper treatment. With the growing need for service dogs and the increasing amount of service dogs in the community, it is prevalent for the public to become educated.

Kosner also stressed the idea that service dogs are working animals doing a job for people, not pets or toys that the public can engage with.

“A lot of people don’t understand the dog is doing a job. A lot of disabilities are invisible. By just doing that is distracting him from paying attention and listening to me. That could be life-threatening for their handler,” Ramp said. “I want people to understand more about how to interact and how not to interact with service dogs and to understanding the training that is involved.”

While Sampson has changed Ramp’s life, he has also changed the lives of people across the country with his fun-loving personality. Ramp created a Facebook page where she posts updates on Sampson and encourages people to vote on the American Humane Hero Dog Awards website.

Often times, just a picture of Sampson can change someone’s day and inspire them to come out of the darkness as Ramp did.

“Sometimes that little tiny bit of light that you can see when you’re in the dark is enough to catch our eye and make you follow that light and carry on,” Ramp said. “Sampson is a daily beam of light for a lot of people.”

It’s Sampson and Ramp’s partnership that is most inspiring to people. Ramp’s persistence to share her story is something that encourages others to take the next steps in their lives, and achieve their goals.

“She wants to change people’s lives and let them know you can come out of really bad situations and turn your life around,” Kosner said. “Watching her is probably more rewarding than anything because whether she knows it or not, she is really impacting people and helping them to move forward.”