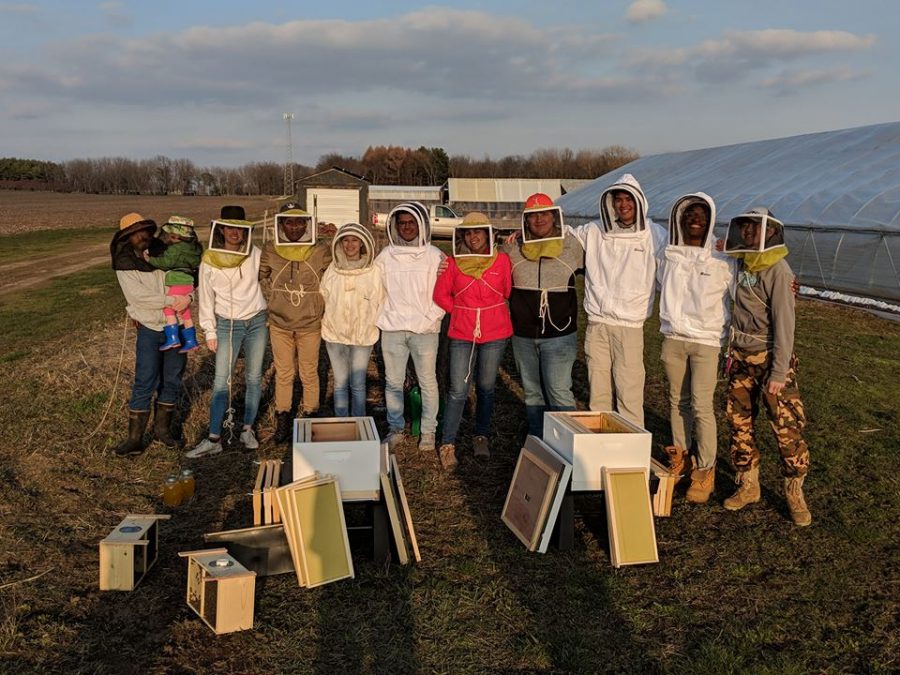 photo courtesy of matt Turino Members of the Beekeeping Club at UIUC assemble to unload bees onto the Sustainable Student Farm. The RSO was created to educate members on proper beekeeping standards and protocol while also serving as a hobby for interested students.

Kids and pets go together like peanut butter and jelly. It’s that little spark of companionship that unfailingly fixes one to the other. Whether it’s a sunny day or a stormy night, pets are always there to make youngsters feel bigger than they actually are.

Depending on the person, the word “pet” could bring to mind dogs, cats, fish or parrots. But if you asked Danny Ferriss when he was growing up, he’d think of an animal that is not exactly known for being cute and cuddly.

Ferriss was, and is, a fan of bees.

Ferriss, freshman in LAS, got hooked on the insect during the frequent visits he made to his uncle’s beehive. Beekeeping as a hobby was a learning experience for him just as much as it was a pastime, one Ferriss has naturally extended into his college years by reading books on the subject.

“I learned a ton in the past year,” Ferriss said. “I didn’t know tons of the specifics before, since I just saw what my uncle did without knowing the reason behind stuff.”

Ferriss wasn’t expecting books to be hard to come by during his first year on campus, nor was he too worried about finding a beekeeping club to join. To his surprise, however, such a club didn’t exist when he arrived at the University last fall.

“I came here thinking that there would probably be a beekeeping club because there’s a pollinatarium in the bee lab,” he said. “I was kind of surprised to see that there wasn’t anything, so I just figured I’d start it up.”

So Ferriss formed the Beekeeping Club at UIUC, a group aimed at educating people on proper beekeeping standards and protocol.

Up until last month, Ferriss, the club’s president, has held biweekly meetings at which he informs attendees about general bee health and conservation through presentations. With warmer weather setting in, the club just recently unloaded its first package of bees onto the Department of Crop Sciences’ Sustainable Student Farm.

Although the farm has stored beehives and equipment for a while, manager Matt Turino said it wasn’t until the beekeeping club got in contact with him that a portion of the land became devoted to beekeeping.

Nevertheless, Turino is thrilled about the ecological benefits the bees can potentially bring to the farm’s crops, which includes everything from tomatoes to blackberries.

“Bees kind of do their own thing,” Turino said. “They have access to come in and out of their hive as they please. It’s one of those things where you put them in the vicinity of the things you want pollinated and let them go to town.”

When the club brought them back to C-U after an hour drive west, the bees, enclosed in a wooden box with screen sides, weighed in at around 3 pounds, containing the queen bee with a buzzing sea of workers.

Moving the mass of stinging critters from the package to the farm’s stationary hive might sound like playing with fire, but the members handled it well.

“When we installed the bees that we just put in, we didn’t even wear gloves,” Ferriss said.

Adam Dolezal, assistant professor in the School of Integrative Biology with a focus in bee health, approved of the students’ confidence. This state of limbo, he remarks, is actually when bees are the most docile.

“Bees are only defensive when they have a home,” Dolezal said. “Otherwise, they don’t have anything worthwhile to defend.”

Dolezal, who’s been advising the Beekeeping Club regarding purchases and other logistics, is impressed with the students’ advanced knowledge on beekeeping, in addition to their initiative and organization.

“(The club members) have been very independent go-getters,” Dolezal said. “Beekeeping is one of those things that’s simple at first, but then, there’s a hundred ways to do everything. I was very happy to see that they were well-studied every step of the way.”

Turino echoes this sentiment, describing himself as a mere observer as members of the beekeeping club emptied their bees onto the farm.

Though Ferriss mentioned beekeeping is a relatively low-maintenance occupation, he and the club still plan cautionary visits to the farm to check for any pests, such as mice or mites, that could potentially harm the bees.

In addition, some members of the club, who are staying in C-U over the summer, will be present to watch over the bees as well.

For Dolezal, this commitment indicates a strong desire among the students to connect with the environment around them.

“Beekeeping gives you an easy way of understanding agricultural production and the food chain,” Dolezal said. “Especially for students who aren’t biology majors, beekeeping offers this little mini-laboratory where they can watch the living world in this controlled way.”

Even if they aren’t the first animal that most people think of when they hear the word “pet,” bees can offer something more than a new connection. They can offer a new outlook.

“I think that education is the coolest part (of the club),” Ferriss said. “Keeping bees isn’t really seen as a common thing, so people who learn at the club meetings can have it as an easy hobby for them.”