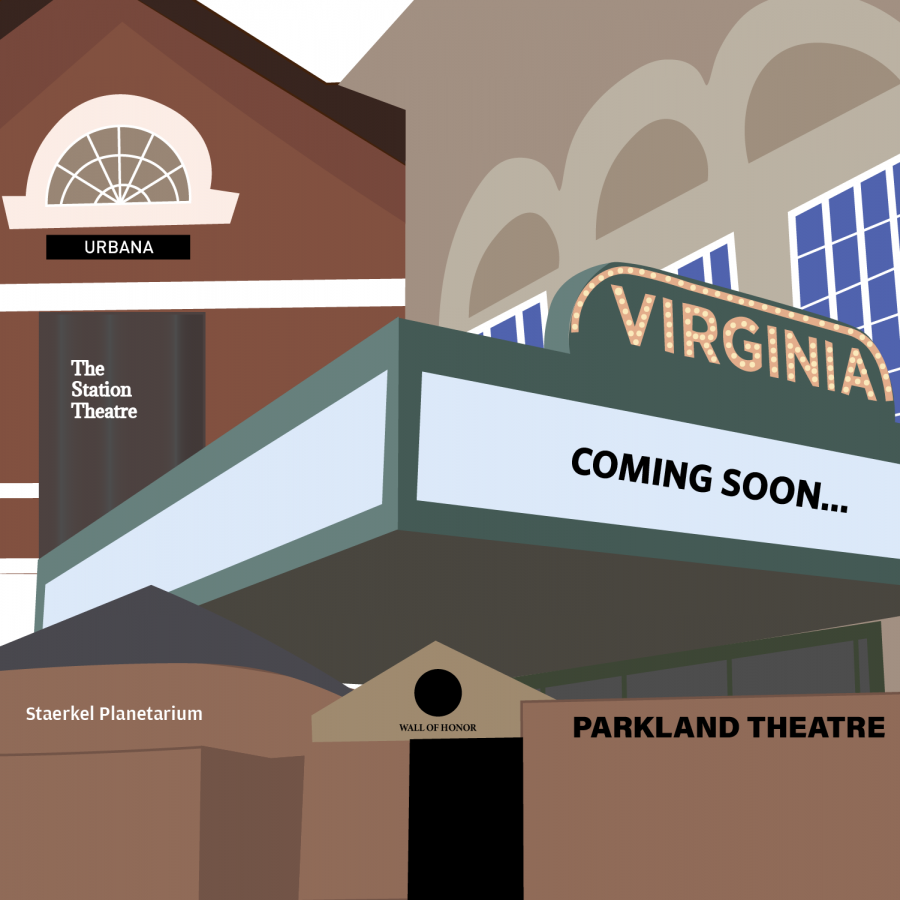 No bright lights. No big signs. No skyscrapers. The twin cities of Champaign-Urbana meet in central Illinois, surrounded by corn and soybeans.

Some of the community’s most popular venues put on performances year-round, with several local theater groups filling the stages. The Champaign-Urbana Theater Company has been a staple in the area since 1991. A clear example of community theater, CUTC provides an open audition process to anyone in the area and welcomes people of all ages to be part of the group’s performances.

“This last show we had a retired department of corrections counselor, an accounting professor, a middle schooler teacher and then high school students,” said CUTC manager Kelly Nowlin. “There aren’t a lot of places where you bring in all those different types of people, and by the end of the show-run, they’re a family.”

Typically, CUTC will put on three shows a year, with an emphasis on popular musicals. A family-friendly approach is taken on each show, something Nowlin states is rather unique when compared with the rest of the Champaign-Urbana theater options.

A venue and group that has been around even longer than CUTC is The Celebration Company at the Station Theater in Urbana. The theater itself was constructed originally as a railroad station to serve the general public in 1921. It wasn’t until 1973 when the station was reinvented into a theater venue that community members would begin to see performances in.

The Station Theater is currently working on its 47th season. It has become one of the most well-known theater options in the area.

“The Station Theater is a really shiny example of what the community has to offer,” said local resident and performance artist Isiah Asplund. “It has a huge patronage that comes and supports the shows really well.”

The performances at the Station Theater will differ throughout the season. Typically, the community can expect a schedule of around 10 shows a year, all of which will be carefully selected by a group of board members.

According to board member Latrelle Bright, the Station Theater selects shows that have found previous success to help ensure their own success. Bright said tickets sales keep the venue and company going, so picking shows people have heard of is the best way to get people in the seats.

Last year, the Station Theater received around 20 applications for shows. Those applying have to submit a summary of the show and how they plan to work the show appropriately into the Station Theater’s smaller-sized venue. At times, the board members will participate in shows through leadership positions, taking on a director role, for example.

An area the Station Theater has been able to benefit from is in the financial category.

For the Station Theater, a dedicated fan and donor base continues to help the facility pay off expenses. While revenue flows in from ticket sales like any other venue, GoFundMe pages and more traditional fundraisers continue to be a large source of money.

Bright recalled an instance where a pickup truck crashed into the east side of the Station Theater building. Damage to the infrastructure was minimal, but expenses were completely paid off through a GoFundMe campaign in a matter of weeks. According to a Facebook post on The Celebration Company at the Station Theater Facebook page on Feb. 10, exactly four days after the original incident, the company raised $2,500.

“We have people that donate money consistently, donate money when we need it; they show up at the ticket office, and when the ticket is $15, they give us $20 and just say ‘keep the five’,” Bright said.

Still, money isn’t the easiest resource to come by.

“Definitely, the financial end of it is challenging. A lot of people don’t realize how expensive it is to put on a show,” Nowlin said.

CUTC will look at popular venues in the area to use for performances. Meanwhile, the company has resources, like an office space, rehearsal space and set design studio, they continue to pay for.

One popular destination for CUTC shows has been through the local Parkland Theater at Parkland Community College in Champaign. The college itself offers a theater program that puts on many shows of its own, including performances that involve Parkland students as well as many members of the surrounding community.

CUTC does have corporate sponsorships and individual donors, but Nowlin describes it as an ongoing struggle.

“To rent a place like Parkland, that’s $5,000 to $6,000 to do that, and then that’s not even your costumes, sets and props,” Nowlin said. “Even with good tickets sales, it’s not enough to pay for everything.”

Even with the financial challenges, Nowlin believes looking at the surrounding theater groups, like the Station Theater, as competition is unnecessary.

“I don’t like to look at other theaters as competition,” Nowlin said. ”I think we have all done really well at working altogether. I think, if you get someone hooked into going, that is good for both of us, because that’s one more person that is a theater fan.”

Parkland Theater is currently in the process of putting on the Tony Award-winning musical “Memphis.” Director of the show Jeff Dare has witnessed the differences in the Champaign-Urbana theater community, specifically while working with CUTC and Parkland.

“It doesn’t feel like one theater company in the area is known as the one; they all have different flavors,” Dare said.

The resources at Parkland through the college’s budgeting allows for a greater sense of organization and professionalism, according to Dare. On the other hand, Dare believes a place like CUTC runs off more passion.

Another larger facility that has had a long history in the Champaign-Urbana community and also houses many performances is the Virginia Theater in Champaign. Open since 1921, the venue was originally looked at as a movie theater. Nowadays, concerts, comedy acts and theatrical performances are all held on the stage.

The theater has received praise from people like Bright and Dare for its union staff. The theater supplies aid for all the different performances that come through. Whether a production needs a stage manager or someone to work the lights, the Virginia Theater has the personnel.

“It’s a big room, and with a big room, there are bigger costs,” said Mitch Marlow, sales and public relations manager at the Virginia Theater.

The price range could push many people away, according to Marlow, which can lead to less theatrical performances. The local theater companies will struggle to afford the costs of the personnel and general stage time.

With a place like the Virginia Theater constantly bringing in professional acts, it does leave less time for local talent. However, because the Champaign Park District has owned the theater since 2000, the facility has added many local theater events.

Not only has CUTC partnered with the theater to put on one performance a year, but the Virginia Theater puts a lot of its focus on youth productions. Two local high schools in Champaign, Centennial High School and Central High School, have both put on performances at the venue, and Marlow says they plan to continue that trend. Youth performances that run through the park district will also use up space throughout the year.

“We are a tax-funded facility, so we have different missions, and one of them is serving the community and bringing things to the community that are of value,” Marlow said.

While the Virginia Theater is approaching its 100th year, it is still trying to grab the community’s attention. Marlow described the facility’s recent history as up and down, with renovations keeping the theater out of the public’s eye for years at a time. Although, its recent consistency since 2013 could pay off.

“I started right when it reopened,” Marlow said. “We have been building up steam since then every year. We have gotten bigger numbers, bigger shows.”

Marlow describes the previous years to have offered one little opportunity after another, and now, as it continues to grow, the word is getting out.

Spreading the word is a valuable concept that more places than just the Virginia Theater are trying to wrap their heads around. CUTC, the Station Theater and Parkland Theater have all made increased efforts to make the community aware of the theater options in the Champaign-Urbana community.

Nowlin said CUTC pushes for all its actors and those involved to invite their friends and family. She made sure to reference the “community” part of the term community theater when describing this request.

The Station Theater has built up a loyal fan base over time, but according to Bright, that doesn’t mean the theater doesn’t see new visitors on a regular basis.

“Every single show, there is someone that walks into the theater and says, ‘Oh my god, I didn’t even know this was here,’” Bright said. “A lot of people still don’t know we even exist, and if they did, I think they would come.”

According to Bright, making the commitment to nurture and cultivate relationships with other communities is the answer.

For Dare, he wishes more people knew about all the different theater companies in the area.

“I think we could probably be spending more on advertising and social network outreach,” Dare said.

A consensus across theater groups and venues is that the number of theater options isn’t a problem. What matters is making the public aware of those options.

No matter the circumstances or differences in style of production for the theater groups and venues in the Champaign-Urbana area, they all share similar problems. However, they all share a similar goal as well.

“It’s so much more than just entertainment; it’s the relationships that those students and families and the people are establishing,” Nowlin said. “It’s the opportunity to get together and do something positive with a diverse group of people.”