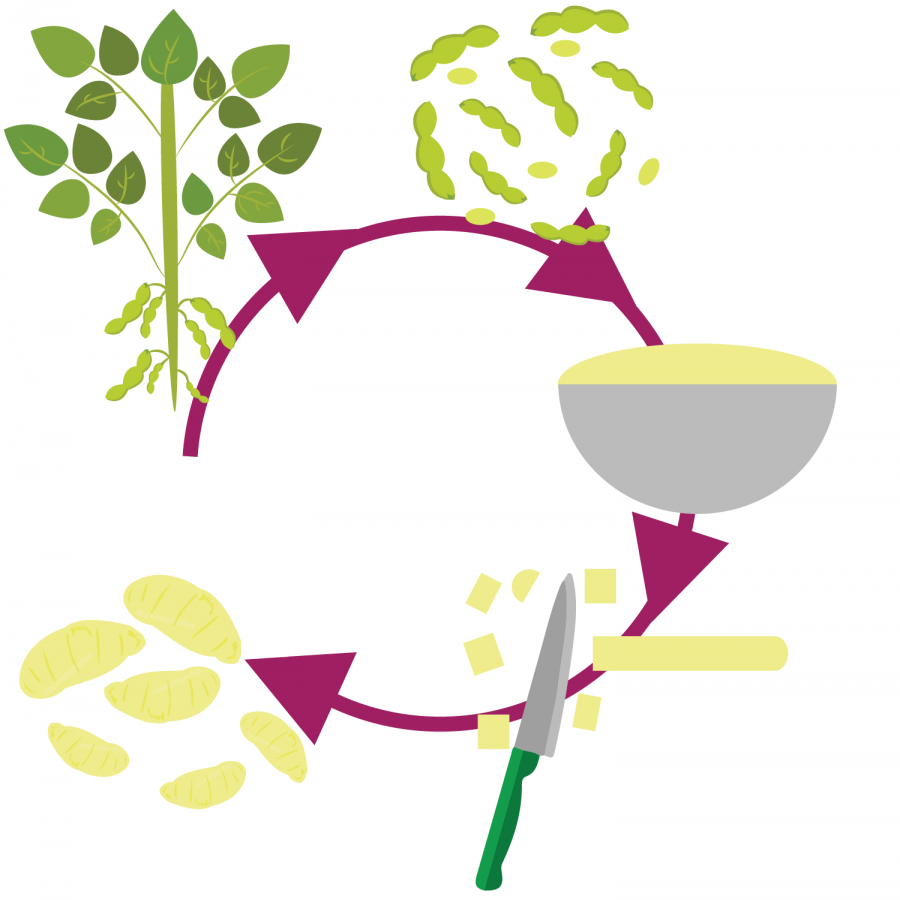 Gnokara, the invention that won second place at the Institute of Food Technologists competition over the summer, was developed by Sharon Li, Ly Luu, Tom Lynch and Nicole Mosier, with assistance from their professor Dawn Bohn. It’s a gnocchi dish created with a soybean byproduct called okara.

The product was created during FSHN 466; the food science students’ senior capstone class. The class was structured as a competition. When the Gnokara group won, they began their work to prepare for the IFT competition.

Lynch said he began working as the team’s formulator before he became the team leader. He was the one who suggested using a natural byproduct to create Gnokara.

“Okara is the byproduct of soymilk and tofu, so it’s basically like soybean mash — everything that’s left over after you filter soymilk,” Lynch said. “So it’s kind of a pulpy mash that I saw a lot of potential in so I proposed that as the byproduct.”

Using a byproduct as the foundation for Gnokara means the product as a whole is able to reduce food waste by using unconventional ingredients which would otherwise be thrown away.

There are multiple aspects of the product that had to be taken into consideration before it could be presented at the competition. Things such as nutrition, ingredients and taste of the product are some of the obvious factors.

Since there are so many aspects to food product development, it took Lynch and the rest of his team’s hard work all throughout their senior year to bring the product to life and make competing at IFT a possibility.

Aside from each component requiring hard work to create the product as a whole, using a byproduct to create Gnokara also made the process more of a challenge.

“(Using okara) kind of limited our options, we also decided that (Gnokara) was going to be gluten-free, so that again limits our options,” Lynch said. “We wanted that challenge. We weren’t afraid of making a brand new product. We wanted ours to be original, brand new and in an emerging field.”

At the IFT competition, there are three components that teams must be prepared for; an oral presentation, a poster presentation and a product showcase.

The team must be familiar with the product inside and out in order to present and answer judge’s questions regarding the product development, marketing, demographics or any other aspect of Gnokara.

Lynch recalled the product showing felt like the team was on a reality cooking show with judges sampling their products.

Gnokara was presented as an all-around sustainable product, with even the chosen packaging presented as plant-based and compostable. Every decision made about each project had to be well thoughtout and applicable to the product itself.

Lynch said one of his favorite memories of working on Gnokara was after the team finished its oral presentation at IFT.

“That was kind of the culmination of all that hard work and we were stressing out at the last minute and you’re presenting in front of hundreds of people and industry representatives and all the other great food science departments across the country,” Lynch said. “So when we finished that and the buildup was all over, that relief was a good memory.”

To be so successful and to work closely together, the team dynamic had to be strong. Lynch said the team put in intense work once they realized they would be IFT contestants in the summer.

Bohn said the team dynamic was successful because of how diverse each student was and how willing the team was to develop alongside each other. Along with the diversity of the team, Bohn said they each wanted to present a product that would be competitive at IFT, which helped set Gnokara up for success.

“I loved watching the team develop from strangers to a committed, well-working team,” Bohn said. “Their focus, drive and desire to learn was so admirable and I felt blessed to be part of their journey.”