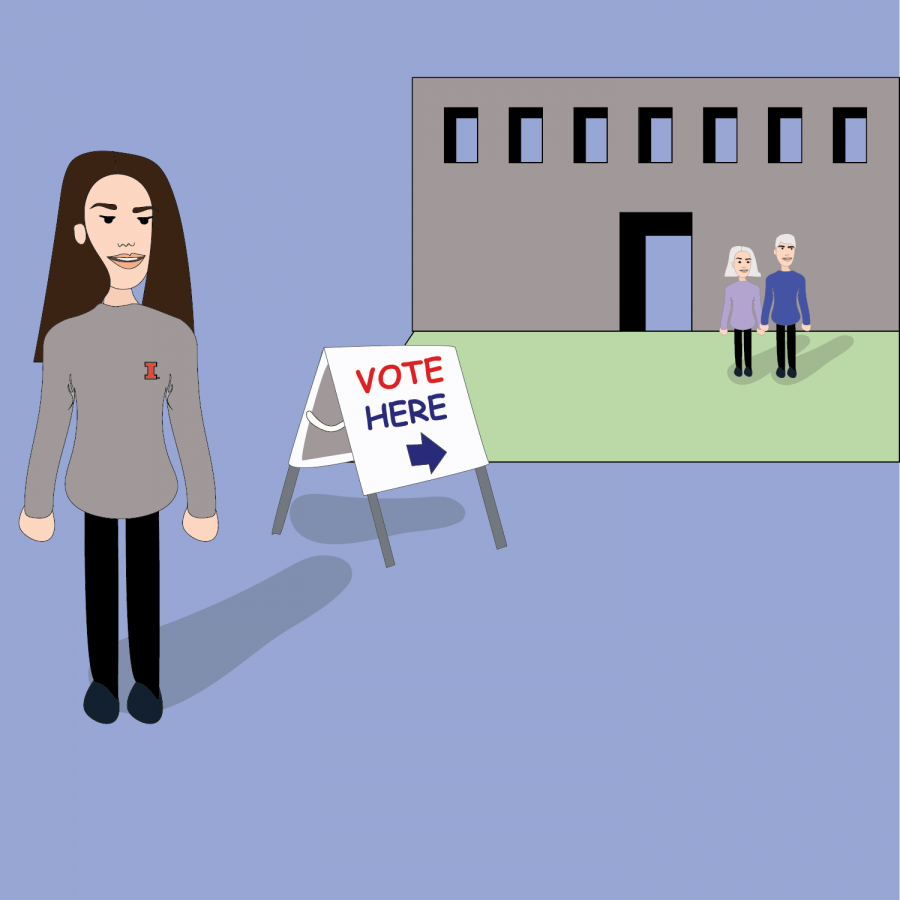 Aaron Ammons has been working on the same project since the early ’00s: registering people to vote.

On a college campus, this job has particular relevance. Ammons believes young voters are the least likely in the electorate to turn out and vote in an election. Many people are trying to change this.

Ammons, University building service worker, co-founded a group called The People’s Agenda, which does work in the community to help elect progressive candidates. Ammons is also running for the position of Champaign county clerk.

The organization encourages people to run for office, trains people to serve in government positions and also moves into the campus to help register students to vote.

“I think there’s a lot more students interested in electoral politics or the government and how it affects their daily lives than we give students credit for,” Ammons said.

One possible reason students were failing to participate in the electoral process, Ammons said, was due to the lack of education they had received in civic responsibility. He said not enough stress is placed on civic engagement. The sense of duty, responsibility and independence that comes from voting is not shared with today’s young people.

The People’s Agenda continues to try to engage young voters in a number of ways. Ammons said the organization’s 100 volunteers registered over 2,000 students on Quad Day this year.

He said starting to get young people active now would create a habit and a lifestyle of civic engagement.

Savanna Pflugmacher, senior in LAS, lives a life of civic engagement that goes a step beyond going to the polls to vote. She has served as an election judge for three years.

In her experience, she said same-day registration really brought out college voters.

Pflugmacher was born in the Champaign area, so she was already registered in the district of her college. However, many students live far from home and have to decide whether to register in Champaign or get an absentee ballot to fill out.

Andrew Silge, fifth-year senior in LAS, votes using an absentee ballot. He said he knows his county better and is more familiar with the candidates running. Ultimately, he said to vote in whichever way makes the most sense to each particular person.

Silge felt it was more important to get people voting in the first place. He agreed with Ammons that schools should focus more on the value of civic engagement.

“We need to, not necessarily force people to vote, but force them more to know about it,” he said.

Max Shapiro, sophomore in LAS, is studying political science, economics and Spanish. He said the key to getting young voters is to make them care.

According to Shapiro, people do not care about politics anymore. He said if they cared more, they would be voting. He thinks people should care more about the federal government, as well as the state and local levels.

Shapiro said people converse more about politics these days. He questioned whether that matters.

One person making an effort to connect the two more on campus is James Hintz, associate vice chancellor for student affairs.

Hintz helps to coordinate one voting initiative on campus: The Big Ten Voting Challenge. This challenge is issued by the Association of Big Ten Students. It takes data from all Big Ten schools and awards the schools with the highest voter turnout, as well as the most improved.

The competition is an alternative attempt to motivate college student voter turnout. However, Hintz said what will really draw students out to the polls will be for a more personal reason.

Ammons has optimistic expectations for the upcoming election. He said that because of events happening in recent politics, more people will be “activated” and will express their feelings through voting.

For Ammons, though, it should not matter what is happening in the political landscape. He calls voting a “centerpiece of your existence as an American citizen.”

Part of Ammons interest in encouraging voter registration stems from his study of the civil rights movement. This helped him gain an appreciation and understanding of the precious responsibility we have in voting.

“(When) I say exercising their right to vote, I really mean fulfilling their responsibilities to vote as an American citizen because I think it’s a duty and a responsibility,” Ammons said.