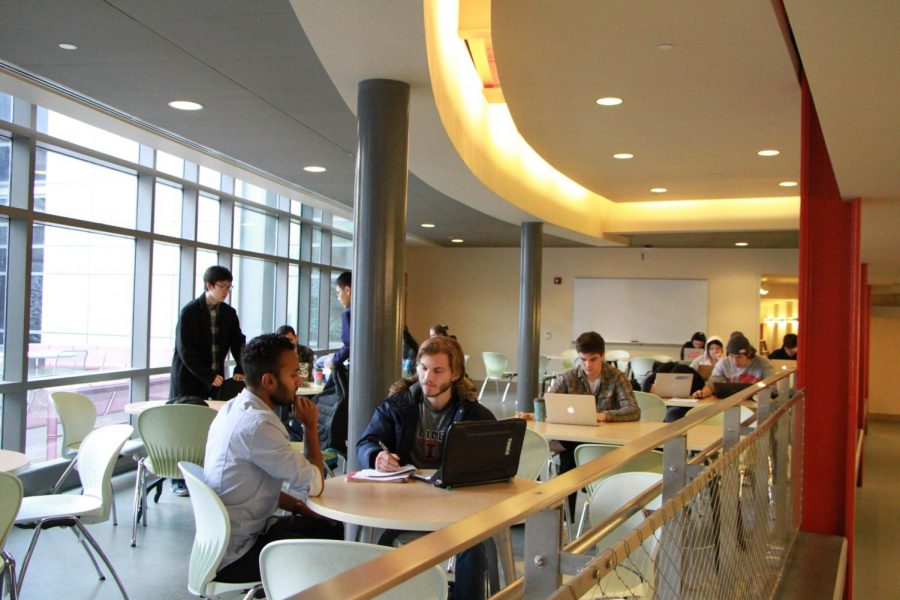 CS + X degrees offer computer science with arts or sciences that allow students to bring computational abilities to their field of choice. The first of their kind, CS + X degrees are growing, with the addition of CS + Advertising, CS + Economics, CS + Geography & Geographic Information Science, and CS + Philosophy this fall.

With computing increasingly becoming a ubiquitous entity in the job market, the University has decided to implement changes in majors to accommodate the growing demands.

Computer science is being combined with a variety of different majors, spreading across disciplines such as liberal arts, business, music and more. These majors give students a single degree that incorporates the core curriculum of CS with another discipline to prepare them for the computational cross-fields between the two and meet growing job demands.

Elsa L. Gunter is a research professor and director of undergraduate programs in the Department of Computer Science. She has been in the computer science department for a little over 14 years.

“CS + X is a recognition that today, computing touches nearly everything, and as a result, the arts, science, business, medicine and engineering are all changing,” Gunter said.

In 2013, the Illinois Board of Higher Education approved the CS + X degree programs, and students were able to officially enroll in these programs in fall 2014. The majors that were offered at that time were CS + anthropology, CS + astronomy, CS + chemistry and CS + linguistics.

In fall 2017, CS + crop sciences and CS + music were announced and in summer 2018, CS + advertising, CS + economics, CS + geography & CS + GIS and CS + philosophy were announced. Students are able to enroll in any of the above programs as of now except for CS + philosophy, which will accept students in fall 2019.

“Both CS and ‘X’ faculty have approached each other to initiate conversations between potential CS + X degrees,” Gunter said. “Faculty wants to make sure that there’s a good fit – that there are academic and practical connections between the fields, which exist or which logically could be developed.”

Gunter said the goal of the CS + X programs is to provide students with the ability to become leaders in ‘X’ through the incorporation of digital technology.

CS + X majors would all need to take the same core CS courses, but instead of taking upper-level CS courses, they would take the core courses in ‘X’.

“We do have a few combined courses that are cross-listed,” Gunter said. “Hiring new faculty who straddle CS and X, like professor Hari Sundaram, who is split between CS and advertising, would increase our ability to offer cross-listed courses.”

Associate professor Hari Sundaram is involved with both the computer science and advertising departments at the University.

Sundaram said the CS + advertising major was born from the growing job demands for people who have a critical understanding of both CS and advertising, due to the fact that the fundamental nature of advertising is inevitably changing because of rapidly growing technology.

“Earlier, what used to happen, you would go to an ad agency, and they would create radio and print ads. But today, almost anyone can create an ad by logging onto Facebook and Google. Through these tech giant platforms, you could potentially reach a worldwide audience,” Sundaram said.

Key ideas of information retrieval, algorithmic game theory and cloud systems are the basis of the ad ecosystem. This is what computational advertising is today. Conventional advertising doesn’t actually study the creation of ads, it studies the effects of ads.

The design of the advertising education was and is largely geared towards what role students would play in a traditional ad agency. But now with Facebook and Google, it was questioned how students should be trained. This was the origin of the discussions in computational advertising.

“Ad agencies are struggling to react quickly, and academic advertising is geared toward ad agencies in their traditional form, which are becoming less and less relevant. This brought forward the idea that students need to learn new things that relate to more what advertising looks like today,” Sundaram said.

Sundaram explains the advertising world is transforming, and the education and skill sets students need to come out of school with are transforming along with it.

“I want students who graduate from the CS + advertising program to understand that the technologies they’re creating will touch the lives of hundreds of millions of people,” Sundaram said. “Having a strong critical, ethical backbone is extremely important because you are making a visceral difference in how someone believes or takes interest in a particular issue. Every student graduating from this program should be critically evaluating what they do.”

The CS + advertising major is an integral part of the transformative nature of education students receive as the world’s job markets change due to technological advances.

Economics is another discipline that has been combined with CS this fall. Melissa Newell is the associate director of undergraduate studies in the Department of Economics. She has been in economics for six and a half years and has been on campus for over 11 years.

Newell explains the overlap between economics and CS is natural with the field of econometrics, and many recruiters that come to the University are looking for students with a more diverse skill set.

“Econometrics, modeling and writing their own code and programs is very important for CS + economics degree.  There was a natural overlap,” Newell said. “It makes sense, and we have … students and recruiters asking for something that would merge the two. They are looking for econ students with more programming and skills within computer science, and likewise, they want computer science students to have understanding within economics.”

Even though the job field for economics and econometrics is very large, the CS + economics major gives students skills to be more marketable and to break barriers into certain sectors they might not have been able to go into previously.

The CS + economics major is designed for students who want both a financial background and computer science skills. Companies who recruit at the University, such as Capital One, look for students with computing skills but also a foundation in economics and finance. This major will prepare students well for positions that require these skill-sets and will open more doors.

“It is very important for students to know why they are going for this major,” Newell said. “It’s not a half and half major. Students need to think about how the economics courses are supporting the computer science courses and likewise.”

There has been an increasing amount of interest across the nation by combining CS and other fields. Stanford launched a similar program after the University did, and the interest seemed to continue to spread to other universities such as MIT and Berkeley that have similar premises behind their programs.

“CS is problem-solving and information analysis with the aid of tools of remarkable speed and precision,” Gunter said. “Hopefully, CS + X is allowing students to see computing in a new light and to help them unlock the potential of computing for the world.”