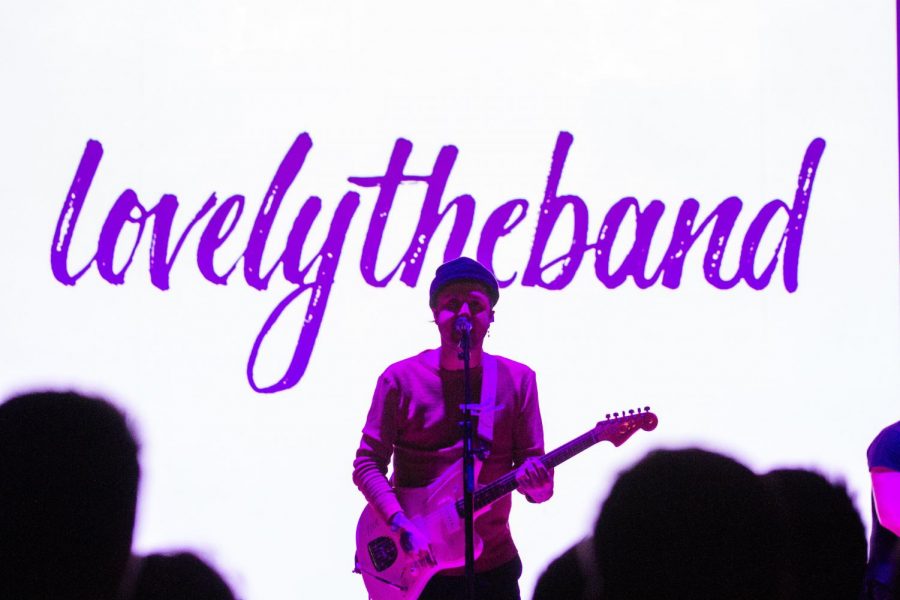 Wednesday night, LA-based indie trio Lovelytheband performed at Foellinger as the most recent act brought to the University by Star Course.

The pop trio consists of lead vocalist Mitchy Collins, guitarist Jordan Greenwald and drummer Sam Price. They just recently finished opening for 5 Seconds of Summer on the European leg of their “Meet You There Tour.”

As the doors opened at 6:30 p.m. and people began to enter, the immense crowd took their seats in anticipation. Despite the chill in the air, fans were excited to party with the band. Fans of all ages could be seen bobbing their heads to pre-show tunes such as the Eagles’ “New in Town” and Fleetwood Mac’s “You Make Loving Fun” over the speakers.

Chicago based band New Age Americans opened the show, playing original songs such as “Hangnail” and “Young Adolescent” as well as their rendition of The Killers’ “Mr. Brightside.”

As their set finished and the lights came up, the excitement in the air intensified. Frontman Tyler Hodgett, a student at the University, asked the fans if they were ready to see the trio to which they answered with deafening cheers and claps.

Shortly after, the band’s logo appeared and the lights went red. Finally, Lovelytheband entered the auditorium. Their entrance was accompanied with screams and a, “let’s stand up,” from frontman Mitchy Collins.

Immediately, fans crowded around the stage, hands flailing and bodies moving to their opening song, “Make You Feel Pretty.”

Dressed in all black, looking like hipster legends, the band and crowd were enamored with each other. Collins made a point to ask his fans how they were doing and if they were feeling good multiple times.

The interaction with the crowd didn’t stop there. Collins spoke about how he never went to college but he said he “watches a lot of movies and in the movies college seems like a lot of fun!”

Lovelytheband played songs from their 2018 hit album Finding it Hard to Smile as well as their 2017 EP Everything I Could Never Say, always keeping their audience on their toes. The trio seemed to be enjoying themselves just as much as their fans, jumping around and encouraging them to clap and sing along.

The audience couldn’t wait to document their experience, and there were phones and cameras flashing and taking videos often. Greenwald was often either playing the keyboard or rocking out with his guitar, as well as Price going crazy on the drums. These sights were not something the audience wanted to miss.

A little over halfway through their set, the trio surprised fans with a dance inducing cover of Ginuwine’s “Pony” with Collins swaying and smoothly serenading the crowd.

To Collins, shows are like a first date. If it goes well, which it was, you play the songs that may or may not be acceptable for all ages.

Throughout the night, fans would scream song names into the abyss, hoping their favorite tune would be on the setlist. When those songs were played, such as “Coachella” and “These are my Friends,” the crowd would push up against the stage and sing their hearts out.

The trio constantly adorned their fans with love, thanking them and hoping to spread some “love and cheer.”

On Wednesday morning, the group took their 13th flight in eight days. During a break from performing, Collins explained how the weather really changes from place to place.

“We’re Lovelytheband and we’re from LA,” Collins said. “So this constant touring means we have to adjust to the weather and man, is it cold. We were in Virginia yesterday and I was like this is cold but we got off the plane earlier today and I was like no, this must be what really cold means.”

Lovelytheband ended their set by playing their breakout single, “Broken,” which spent nine weeks at number one on Billboard’s Alternative Songs charts.

Before beginning to play, Collins addressed the audience to explain their next song, and to send love to any of their fans that can relate to the music.

“If you’re battling any kind of addiction, depression or anxiety please know you’re not alone,” he said. “I know what that feels like. I continue to live with that everyday of my life. Check out the people you love. Be with the people you love and who love you. If you are struggling, if you need any help, ask. Please remember it is perfectly ok to not be ok. This is ‘Broken.’”

Before exiting the stage, Collins thanked the crowd, as well as his bandmates.

“We have the most wonderful job in the world. So thank you from the bottom of our hearts,” he said.