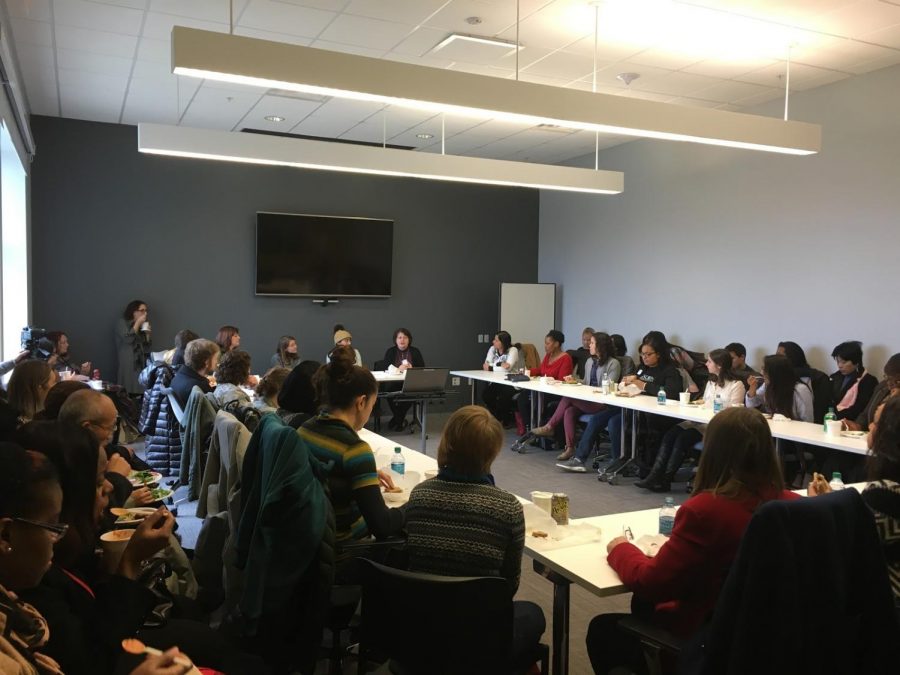 AWARE is attempting to assist women with entrepreneurial ambitions, and their first event was attended by 60 people.

The program is led by Laura Bleill, associate director of Research Park, and Jed Taylor, executive director of the Technology Entrepreneur Center. AWARE was created in 2016 in collaboration with Dr. Jesus Soriano at the National Science Foundation after the realization they were not receiving enough grant applications from technological entrepreneurs who were women and underrepresented minorities.

“We had several discussions with (Soriano) about what we were doing on our campus to make our ecosystem more accessible to entrepreneurs across campus,” Taylor said.

The TEC, housed in the College of Engineering, and EnterpriseWorks partnered with Illinois I-Corps, a program which aims to commercialize technology.

“The Illinois I-Corps program’s track record of including underrepresented teams in their early cohorts was one of the factors that caught the NSF program director’s eye and led to the early discussions and formation of the AWARE program,” Taylor said.

AWARE is meant to connect underrepresented entrepreneurs with programs that already exist.

“Rather than creating special workshops for these entrepreneurs, our goal is to find ways to funnel them into the existing programs and make the existing ecosystem more accessible,” Taylor said.

The Research Park Entrepreneur-in-Residence program plays a huge role in the functioning of AWARE. Through the EIR program, experienced and successful entrepreneurs provide free consulting to new startups and prospective technological entrepreneurs about the challenges they may encounter during their journeys.

Through the AWARE program, a dedicated entrepreneur-in-residence, who is familiar with the needs of the minorities, is made available to the aspiring entrepreneurs, Taylor said. In addition, small proof-of-concept grants for teams, targeted mentorship, training and networking opportunities are also provided.

Karin O’Connor, president of Perimeter Advisors, serves as an entrepreneur-in-residence and mentor for AWARE. She also conducts information sessions, generally on topics related to crafting a successful business model and understanding value creation.

O’Connor believes the first step in making a change and in empowering the inadequately represented entrepreneurs is informing students about the resources available.

“What I’ve found is that a lot of people either don’t know about the great resources we have here or don’t know how to access them,” O’Connor said. “By providing information, encouragement and support, we have convinced a number of them to get involved in programs like NSF’s I-Corps, the I-Start program, the iVenture Accelerator, SBIR grant applications, and the Cozad New Venture Challenge.  We are seeing more diversity in these programs all the time, which is great.”

EnterpriseWorks holds events tailored to the needs of the targeted audience of AWARE. According to O’Connor, it organizes many informational programs including “Lunch and Learn’s,” which address topics such as business building, intellectual property and capital raising.

“We’ve also just launched a monthly roundtable specifically for our AWARE entrepreneurs — a forum for celebrating the accomplishments and working through the challenges that come with start-up life,” O’Connor said.

Dr. Leanne Labriola, an ophthalmologist in Urbana, has been satisfied with AWARE and EnterpriseWorks, especially after attending a luncheon event with O’Connor.

“They bring in novel programs; they are dedicated to supporting entrepreneurs with relevant resources,” Labriola said. “I look forward to continuing to attend workshops and meet with EIRs at EnterpriseWorks. They have helped me in my current business endeavor as well as future ideas.”

Labriola has been involved with EnterpriseWorks events since 2014 and has participated in the I-Corps program twice, as well as the I-Start program. She hopes to get involved with AWARE next because of its support for female entrepreneurship.

“AWARE seems like a nice, new opportunity that fits with my goals of continuing in the space of entrepreneurship,” she said.

The turnout at the program’s events has been well-attended, with 60 people showing up for the first event. Taylor was overwhelmed by the demand for these programs.

“I’ve met some amazing people and gotten an early look at some incredible technological developments,” O’Connor said. “As a nontechnologist, I’m always blown away by the work that is being done at the University.”

O’Connor stresses utilizing these resources is key when finding one’s way into the community.

The creators of the AWARE program have big plans for the future.

“We are currently in the process of thinking through what AWARE 2.0 will look like, and the more people are involved, the more input and feedback we can receive to help ensure that we are meeting the needs of campus,” Taylor said.