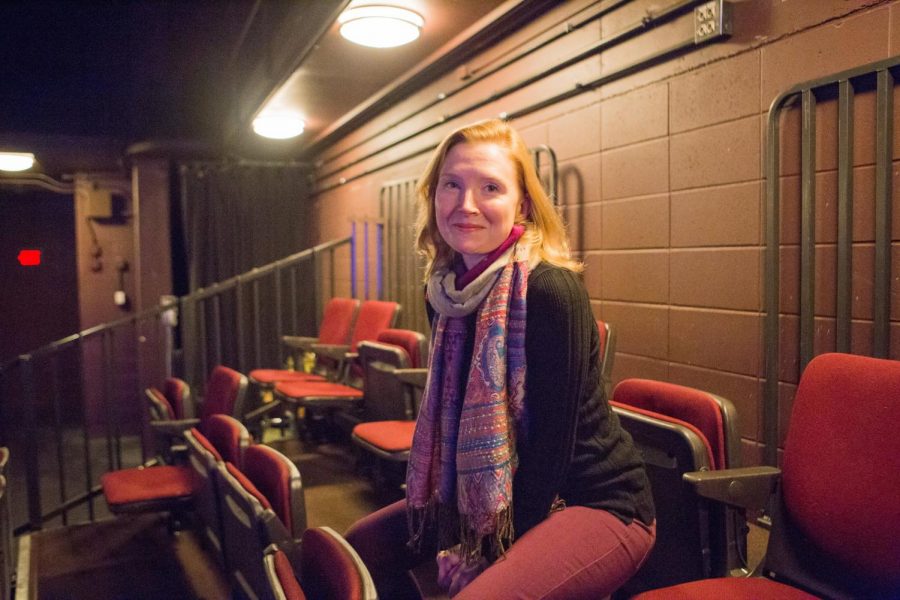 Nisi Sturgis, a new assistant professor in FAA, is a nominee for a Screen Actors Guild Award. Nisi’s professional acting experience has led her to direct an all-female cast play at the Krannert Center.

Nisi Sturgis was a performer at an early age. Her parents tell the story of how she sang “I’m a Little Teapot” to her daycare but replaced the line “tip me over and pour me out” with “sock it to me baby, let it hang all out!”

Sturgis, a new assistant professor in FAA, said she knew her passions early and never doubted her actions or feared the unknown.

Before starting her tenure track at the University, Sturgis was an actress. She said the projects she was proudest of told the stories of people who are often overlooked. She was in a traveling piece “Disgraced,” which was written by Ayad Akhtar and won a Pulitzer Prize in Drama.

Sturgis said the story is “cathartic and powerful,” telling the story of a Pakistani corporate lawyer who denies his Muslim heritage and rejects aid to a man wrongfully convicted of terrorism.

“Being a part of this play that brought these things up actually helped people and helped us brace ourselves,” Sturgis said.

Her pull to the University was connected to Kirsten Pullen, professor in FAA and the first female head of the theater department, as well as a fellow mother. She showed Sturgis how the department could be a reliable home. Sturgis said Pullen not only brought her into the program but also helped her stay here.

Sturgis had one overarching theme as she taught her students: to help them get outside of themselves and figure out what matters.

Erica Hernandez, a graduate of the FAA program and teaching assistant for Sturgis, said Sturgis is a kind, generous person who she learned a lot from. She said she admires Sturgis’ freedom to take on other projects away from the University as “essential to the foundation of training that is happening here.”

Alexis Walker, senior in FAA, said she appreciates Sturgis’ teaching method. Part of Sturgis’ job was “making everyone feel like their voices were heard,” she said.

“She talks to us like we’re already getting work in this business,” Walker said.

The structure of her classroom follows what Sturgis called the “Black Acting Method,” which she described as promoting a “collective tribe” who “live now together.”

The tribe is meant to connect these students and find themselves in the arena of empathy.  Sturgis brings up student Gabe Herzog, junior in FAA and LAS, as an example of how this helps get students to “connect to their voice and be passionate about sharing something”.

Herzog said he displayed his voice through something called an offering. This meant sharing anything personal or inspirational. Herzog said he printed pictures of transgender people who were murdered in 2017.

He said these offerings succeeded in “bringing more awareness to class about things that I care about.”

In addition to these offerings, Sturgis did a recent project with the students regarding the theme of the immigrant experience called the Anna Deavere Smith Project, inspired by Deavere’s journalistic skills of interviewing people with a specific theme.

They had to interview various immigrants found through La Casa Cultural Latina and give a performance of their way life.

“It was very difficult for them,” Sturgis said. “Appropriation is a very tricky thing.”

“She really wanted us to think of it in an abstract way — to expand our mind and imagination as an artist,” Crawford said.

Sturgis said while she was ambitious growing up, she had many difficulties to overcome. Her parents were splitting up, and her father passed away. She was called a tomboy and weird.

“Theater was a place where I felt like I was valued for my humanity,” Sturgis said.

As a person of many homes and a person who has left impressions on many people around campus, she decided to stay at the University. She started by teaching the stories behind her characters and now is working with the brilliant staff and students.

“There’s a lot of fear that I feel especially for the students and people throughout their lives of like, ‘What if I’m making a bad decision? What if I’m going the wrong way?’” Sturgis said. “If you’re a good person, no matter what decision you make, you make it good.”

Correction: A previous version of this article misquotes Sturgis about her teaching method, in which we quote it as “Black Technique.” The correct term is “Black Acting Method.” The Daily Illini regrets this error.