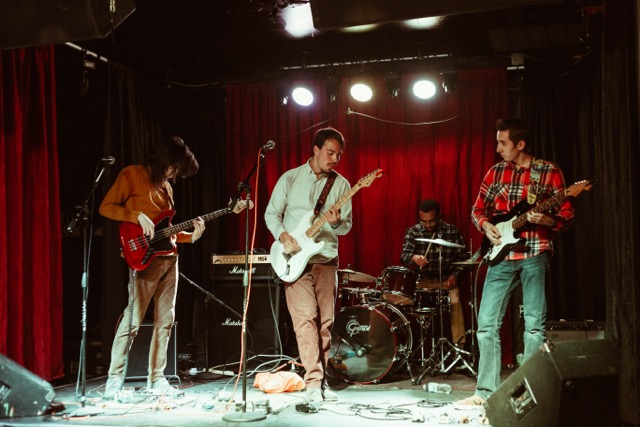 The band Today’s Children performing on November 28, 2018 at the Canopy Club.

Flor Fest is a new music festival that aims to unite local musicians in the Champaign-Urbana area on Friday. Students Edgar Cuevas, junior in LAS, and Dania Avila-Cardona, junior in Education, organized the festival to bring the art and culture community together.

Cuevas, the president of the festival, and Avila-Cardona, the vice president, are also part of Flor Poetry, an organization on campus that gives students space to practice and perform poetry. Cuevas originally had the idea for the festival less than three months ago and began designing the festival. He quickly helped recruit over 20 artists and bands from across Illinois to perform.

“I think the greatest thing about this is that it was something that we are both so inspired and passionate about so it came together so quickly,” Cardona said. “In two meetings, we just sat down and this is exactly what it’s going to look like and in a few weeks, it has developed into Flor Fest.”

Flor Fest will be held at the Urbana-Champaign Independent Media Center Friday from 4 p.m. to midnight. While admittance is $10 at the door, proceeds from Flor Fest will be donated to the Up Center, an organization that supports the LGBTQ+ community in Champaign County, a cause important to Cardona.

“The LGBTQ community is something that is so prevalent in the music community, so I feel like it’s important to show not only the music side but the human side,” Cardona said.

The team behind the festival also made the show open to all ages, practicing inclusivity to everyone in the community.

Because operation costs are low, Flor Fest to donate the majority of the money they earn to charity. Their only costs so far included a $12 domain name and a roll of tape.

Despite it being the first Flor Fest, the planning team had no trouble finding talent to perform.

Anka Radley, junior in Engineering, is a folk-rock soloist performing under the name Clockwork Owl.

Between her music and engineering coursework, Radley said she doesn’t have time for much else.

“I have very little time outside of school anyway and when you add the music in there I basically have no time outside of that,” Radley said. “I’m still trying to find a balance, but I’m getting there.”

After growing up in Hong Kong, Radley came to the University because of the world-renowned engineering program and was unaware of the C-U music scene.

“I really lucked out with U of I,” Radley said. “I was introduced to the music scene, and it was everything that I wanted. There’s nothing like this back home for me, and it was the perfect place for me to come to without even knowing.”

Like other traditional music festivals there will be two stages; one band setting up as one performs, making sure there is continuous flow of music.

Songwriter Nick Arger, senior in LAS, said the music scene in C-U supports musical talent. Arger is a member of the rock band Today’s Children who will also be performing in Flor Fest.

“If you go to Los Angeles or New York where the industry is there, it’s so cut throat,” he said. “But in smaller towns, everyone is appreciative of the work that goes into it.”

Cardona credits the C-U community for allowing smaller shows like Flor Fest to be successful.