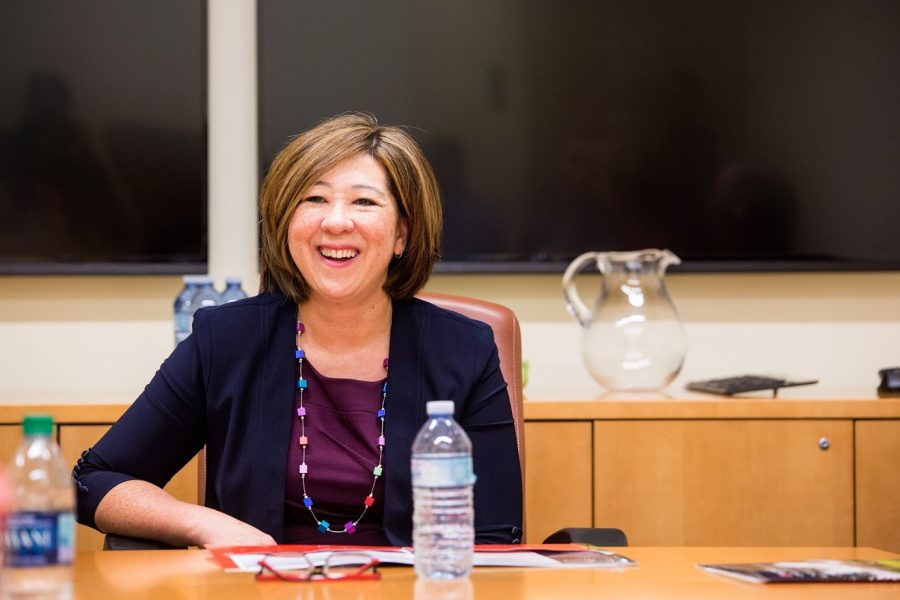 Juliet Beyler speaking at the Chez Center for Wounded Veterans on Tuesday.

Juliet Beyler didn’t second guess what she wanted to do after high school graduation: join the United States Marines.

Beyler, a University alumnae, joined the Marines when she was 17 years old and, at the time, didn’t have a desire to go to college. After nearly 30 years with the Marines, she has maintained several officer positions, including one at the Pentagon.

“I was bored in high school,” she said. “Freshman year was A’s, sophomore year was B’s, and junior and senior year D’s. I came close to not graduating from high school.”

Beyler went to the University because she had the opportunity to better her education and get a degree, but it was a “no brainer” for her to go back into the military after college graduation.

“The University of Illinois took a chance on me,” she said. “My grades were terrible in high school and so when I decided I wanted to apply to the University of Illinois, I wrote my essay and I said, ‘Look, my high school grades were terrible. I was unfocused, I was not prepared, but I’m ready to go now and I’m ready to learn.’ I wasn’t sure but they took a chance on me and accepted me.”

She was able to get her dream position as a combat engineer her senior year in college where she built temporary buildings, landing strips and training campus while also getting to “blow stuff up,” she said. This was not a position that was easily attained by a woman in the ’80s.

“(The military would) always just open opportunities for women, I use the term ‘by exception.’ They’re like, ‘We’ll look at that’ and ‘We’ll open that one’ and so what we did is we flipped the whole thing on its head and we said everything should be open unless there’s a reason to close it,” she said.

After Beyler argued for the “no exceptions” rule for two years as the policy lead, the U.S. Secretary of Defense ruled in her favor in 2015.

“Now every single position is open to anyone based on training and ability,” she said.

Beyler eventually switched over to the U.S. Navy because she says the Navy is “on the forefront of the military,” which for her means there’s more potential to make an impact on the U.S. Department of Defense.

Beyler came back to her roots in Champaign to speak with the University’s ROTC and veterans program. Jonathan Bush, the U.S. Navy public affairs officer who set up Beyler’s trip to Champaign, is honored to get to work with such renowned veterans.

Cheryl Hanley-Maxwell, dean of the College of Applied Health Sciences, said she believes Beyler’s visit could have a huge impact on the University’s military programs.

While the University doesn’t typically have a renowned program for veterans, Hanley-Maxwell said they’re continually leading in veteran-friendly facilities, resources and programming. Hanley-Maxwell and staff at the Chez Center for Wounded Veterans have been discussing more policies to put in place at the University that would make it an easier transition for veterans.

Beyler has tried to do good throughout the military even though her loyalty has stayed with the Marines. Even though she had a past as a combat engineer, Beyler still had to go into combat in Iraq in 2003. She said most of her fear came from being unsure of herself and her training.

“There was one moment in Iraq where I could only see it in slow motion, but we had something going on and I remember you could feel the panic start to rise and my executive officer who’s like my deputy kind of looked at me and he said, ‘What do we do?'” Beyler said. “But then all of a sudden, the Marines started doing what they were trained to do. I didn’t have to think about it and so that helped with the fear because you know more than you think you do and you have to have faith in that.”

This is the most effective way of leading and learning, according to Beyler. In her current position at the Pentagon, she makes constant efforts to tell people what the end goal is, but they have to figure out how to get there.

“You have to be good, whatever your chosen profession,” she said. “Fundamentally, you have to be good at it is and be solid in the fundamentals. But beyond that, just have faith and don’t get frustrated when you make mistakes.”