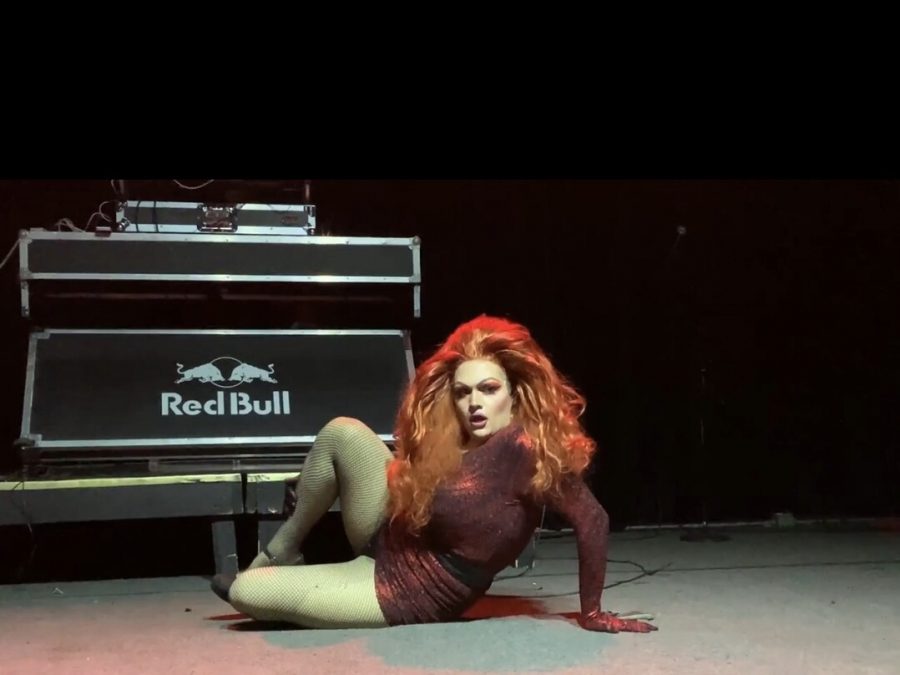 “When I hit the stage, I think ‘How would Beyoncé do this?’” Mayonaé said. “’How would she carry herself?’ I try to embody what she would do. When I hit that stage, I’m pretty much demanding attention.”

Mayonaé will pass down her crown at this year’s Drag Wars, an annual lip sync battle in drag. This year, it will take place at 51 Main St. in Champaign on April 19.

However, Mayonaé said her journey into drag wasn’t smooth. She recalls sobbing the first time she performed in drag in 2016, a year after coming out as a gay man to her friends and family.

During her set, she performed two songs: “Crazy in Love,” as inspired by her idol, Beyoncé, and her mom’s favorite song, “And I Am Telling You.” Her mom, who was among those in the audience, had initially disapproved of her son’s decision to do drag.

Now, Mayonaé said her mom loves traveling with her to watch her performances.

“Drag has helped me discover myself as a gay man and express myself for being gay after not being able to express my feminine side when I was younger but in the closet,” Mayonaé said. “Drag is an extension of your personality you can’t be on a day-to-day basis. It’s taught me not to conform to what society says that you need to be.”

Only a few days before Drag Wars, the Illini Union will also be hosting a show, their annual Illini Union Board Drag Show on Thursday at the I-Rooms. The show will feature six drag queens, one transgender female entertainer and one male performer.

“Drag shows aren’t just for the LGBTQ community. Anyone is welcome,” said Chloe Sun, cultural programs director at the Union. “It’s a good way to tell students they’re not alone. By having such events, they won’t be as hesitant to tell their friends about their sexuality.”

Although the C-U community has taken steps toward embracing diversity in sexuality and gender, drag newcomer Imogen Ettis, sophomore in ACES, said the overall societal transition to be more inclusive of the drag community is fairly new.

“Up until a couple of years ago, (drag) was very much shunned,” Ettis said. “It was the dirtiest, cheapest art form, just something you see at bars maybe. But it’s kinda been elevated to this point to where people want to be them. They don’t just empower LGBTQ people, but also (cisgender) straight women who see ‘RuPaul’s Drag Race’ or drag queens in general and are like, ‘That’s beautiful. I want to be that.’”

Clad in a corset tight enough to make “everyone else in the room want to faint,” a sky-high wig, teetering heels, hip and breast pads and three hours worth of makeup, Ettis took the stage for the first time in drag at this year’s Purim Drag Show in March at the Canopy Club.

After Ettis dramatically dropped into the splits, the crowd went wild. All that followed was met with an equal eruption from the crowd as they eagerly offered dollar bills and cheers for the surprising newcomer.

“I totally got lost in the performance,” Ettis said. “(Drag) is kind of like a mask. Your body is totally different, (and) your face is totally different. All the expectations people would have of watching you are gone. Going out there was like a new slate, and you can just portray whatever you want with that.”

For Ettis, embracing himself as a gay man and then deciding to transition into drag was a difficult feat, especially in a conservative household. Growing up, Ettis described himself as heavy, insecure and introverted.

“It really sucks to be in a position where you know who you are, but everyone is telling you ‘That doesn’t exist’ or ‘That’s not right’, and you’re like, ‘It does exist because I’m here’,” Ettis said. “Even now, I’m not out to my whole family, but that’s fine. At this point, it’s pretty obvious they know that I’m gay, but only my sister knows I do drag, and that’d be a bigger issue.”

Ettis advises anyone struggling with their sexuality or gender to prioritize their personal happiness first.

“In some ways, everyone else around you is temporary,” Ettis said. “The only person who’s with you from the moment you’re born to the moment you die is yourself. You really have to realize that and be comforted by that. The world’s not perfect, but you can at least fight to make it better by making it better for yourself.”

Editor’s note: A previous version of this article stated a performer will be from Las Vegas at the IUB Drag Show. All the performers are local. The Daily Illini regrets this error.