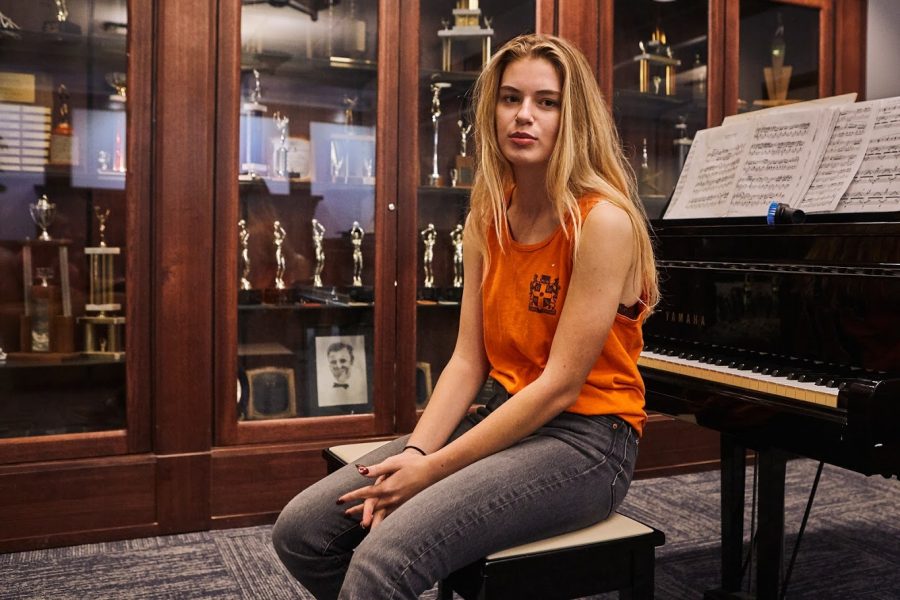 Sophomore Michaela Reid, an Evans Scholar, sits in the Evans Scholar House. The Evans Scholars program provides full tuition and housing scholarships to prospective or current students who have caddied for two or more years.

College can be expensive, and the ways students pay for school is different for all of them. Some students work part-time jobs and other take out loans. However, for some students at the University, working on a golf course as a caddie is the ticket to free tuition.

The Evans Scholars program provides full tuition and housing scholarships to prospective or current students who have caddied for two or more years. The scholarship was operated by the Western Golf Association, which partnered in 1930 with the famed amateur golfer Charles Evans to start the program.

The scholarship, which is one of the largest privately funded scholarships, covers four years of tuition at a state university for those who meet the requirements.

Many other Big Ten schools are part of the program, including Northwestern University, University of Michigan and University of Wisconsin. The program offers chapter living, similar to a fraternity or sorority.

The Evans Scholarship is awarded to golf caddies who demonstrate character, academic success, a strong caddie record and financial need. Nationally, Evans Scholars attend 19 different universities, 14 of which have houses.

At the University, there are 135 students in the Evans Scholars house on Third Street, where they  live for all four years of college.

However, this year, the house reached capacity and the freshmen scholars took up residence at Illini Tower.

Michaela Reid, sophomore in LAS, was not aware of the scholarship while she caddied in the summers prior to coming to the University.

“A lot of people’s experiences were just working over the summer as a caddie, and it was mentioned to you or said ‘you would be good for this,’” Reid said.

The scholarship is extremely competitive and prestigious. Students must continue to reapply to the program every year to continue receiving funds.

One summer, Reid caddied with a peer whose tenacity and perseverance led her to reapplying to the program.

“I knew a girl I caddied with who couldn’t afford to go to college,” Reid said. “Instead, she volunteered abroad for a year and then applied again; she’s pretty remarkable.”

The Evans Scholars make up for not having a kitchen in their house by working at sororities.

The scholarship program mirrors Greek life in some ways, with its shared house, executive board and pledge families. The scholars also all have meal jobs at sororities — washing dishes twice a week for an hour. Through this, they are able to eat at the houses in which they work Sunday through Friday.

There are internal traditions, too, like Monday Fundays, similar to Greek Life. Every Monday, a group of scholars is responsible for getting snacks for the whole house. The scholars like to switch it up — some Mondays could be make-your-own taco or simply a bowl of cereal. This time also allows the scholars an opportunity to interact with each other and catch up during the hectic school year.

Apart from the fully covered tuition, Matt Finan, senior in ACES, has enjoyed the service part of the program throughout his time at the University.

Finan caddied for eight years prior to college. In his senior year of high school, Finan knew he wanted to give the scholarship every ounce of effort.

For most Evans Scholars, this scholarship is their only method of paying for college.

“At its foundation, we’re all caddies from low-income families, and when you have all of these people going to bat for you, it’s hard not to want to pay that back,” Finan said about the scholarship.

A major piece of the foundation of the program is its commitment to service. The program hosts blood drives as a way to give back, and scholars have started going to the food shelter as well.

“We’re really trying to follow through with the idea that we’ve been given this golden opportunity,” Finan said. “We should be paying that forward to others.”

As a freshman in high school, Fines Owens, junior in Business, was told he qualified for an academic scholarship. While he had no interest, his mother knew the scholarship would pay off in the long run.

The diversity among his fellow scholars is what stands out about the chapter living on campus.

“We have kids who are involved in a ton of organizations, kids who go out a lot, kids who are managers of sports teams,” Owens said. “The thing that brings us all together is that we all caddied.”

As an upperclassman, Owens is looking back on his experience as an Evans Scholar and knows he made the right decision.

“The thing that I’ve gotten the most out of it is knowing that the people I associate myself with on a daily basis are just as like-minded and hardworking as I am,” he said. “That’s what means a lot to me.”