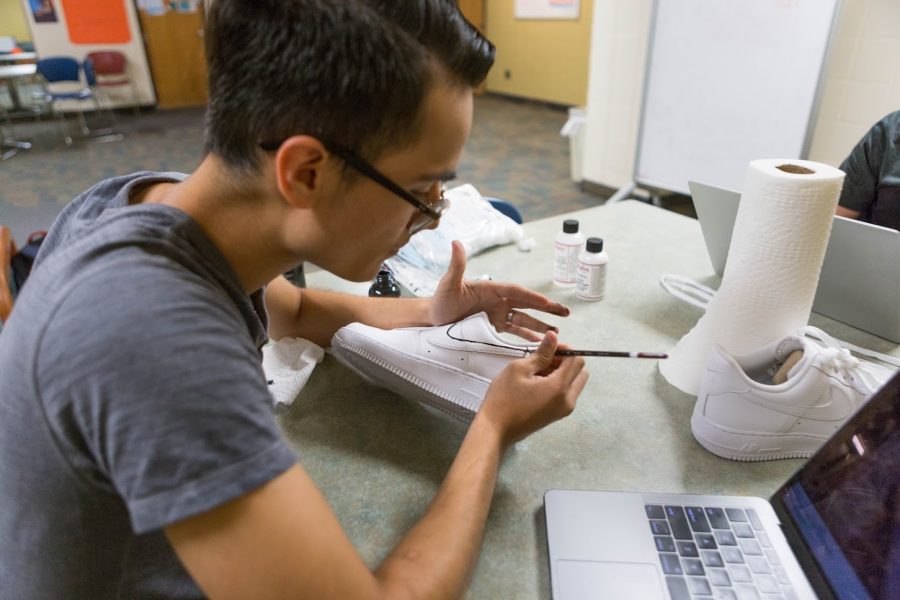 Cedric Vargas is customizing a pair of sneakers that will be available for rental by his company, Teneez, Monday.

The market for lifestyle sneakers has evolved and grown. This movement has inspired student entrepreneurs to create a shoe rental business on campus to fill a hole in the sneaker culture on campus.

Cedric Vargas, senior in Engineering, and his partner Benoit Ortalo-Magne, junior in Engineering, have created a sneaker rental service called Teneez. The company, which officially launched its website on Sept. 18, currently offers seven Nike and Jordan sneakers to choose from. Customers can rent the shoes based on a nightly or weekly fee. A $10 deposit is also charged with each pair of shoes in case of damage. Each shoe varies in price, the lowest at $11 a night for the Air Jordan 1 Low “Gold Toe” and $22 a night for the Air Jordan 4 Retro “Pale Citro.”

Vargas was inspired to start the business based on his own difficulties finding and financing shoes.

“I’ve always liked sneakers but I have a small foot, so getting them has always been really hard for me,” Vargas said. “Not only that, but I had to spend the money, and then I only wear them when I’m going out, and then they get dirty. It just doesn’t seem worth the money that I put into it, so I was coming up with a solution to try and combat that.”

Vargas got the idea for Teneez in his technology entrepreneurship class. Vargas was in charge of interviewing a group of individuals on campus, sneakerheads, but he had an idea before even speaking with them.

“Without even getting to them to find out what their problems were with shoes, I knew I wanted to try this out and see if it worked,” Vargas said.

Over the summer, both Vargas and Ortalo-Magne worked at John Deere, an agricultural company in Moline, IL. It was here that Vargas introduced the idea of Teneez to Ortalo-Magne.

Ortalo-Magne does not exactly identify as a sneakerhead. Although, he does have an appreciation for certain models.

“I don’t know about the whole sneakerhead idea, but I like shoes,” he said. “I buy nice shoes usually but not to the extent of a sneakerhead,”

Magne points out he has a couple of pairs that he holds in high regard, like his Adidas Ultraboosts and Parleys.

Coming up with a name for a startup sneaker company proved harder than initially thought.

The duo came up with over 75 names before landing on Teneez. Part of the process was weeding out what names were available. At the end of the search, Teneez was the only name that was not already used in the shoe market and had no trademarks.

With a new company comes room for improvement and criticism. Days after the website was launched, the company received negative reviews from students on the usefulness of the company.

“A lot of what I learned in technology entrepreneurship is, you don’t know what your customers want, that’s why you reach out to them,” Vargas said.

After seeing what ensued the night before on Reddit, Vargas and Ortalo-Magne began crowdsourcing for what their customers would want out of a shoe-renting company.

Crowdsourcing became an integral part of the company as they enlisted the feedback from students on campus to employees at Foot Locker and Finishline.

“Our thing would be more going towards the higher end shoes that would be really difficult to get. For shoes like those, it makes sense for you to rock them out a couple of nights and rent them out,” Vargas said.

Josh Sanchez, senior in Engineering, also took some of the same technology entrepreneurship classes Vargas was in. Throughout their time on campus, Vargas occasionally bounces ideas off of Sanchez based on his background in software.

“I think it’s interesting because I don’t think that I’ve seen anything quite like that concept,” Sanchez said about Teneez.

Vargas sees the same issues that other students brought up with the company include the draw to high-end, limited sneakers.

“For a lot of these sneakers, they can be really hard to come by,” Sanchez said. “You have to stand in line all day to get them from the local retailer. You can try to get them online but you might not even be able to get them because there’s a lot of bots.”

While there are certainly issues to correct, Vargas finds hope looking at the success of other startups.

“Nobody wanted to do Uber when it first started. Who would want to come into somebody else’s car? I’m hoping this will be something like that but we won’t know until the future,” Vargas said.