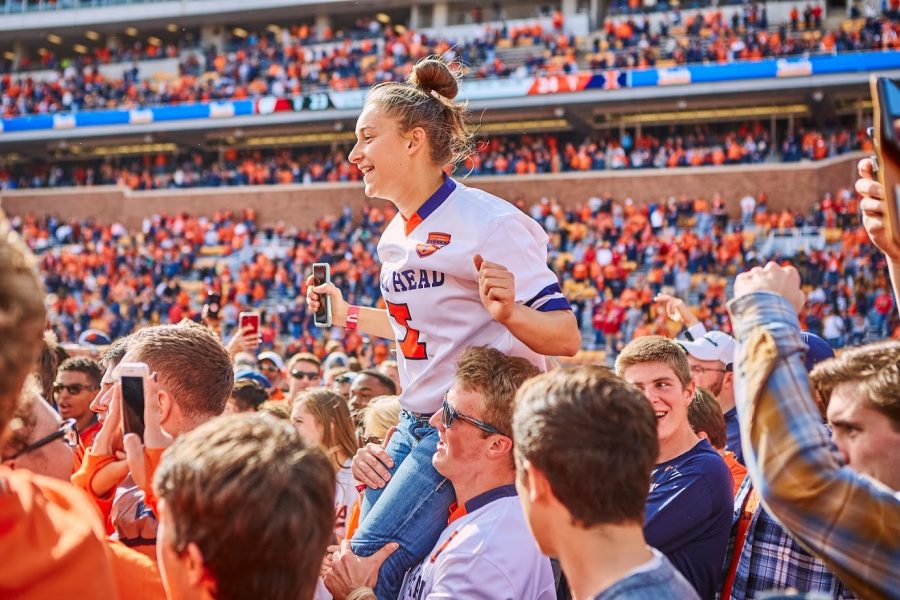 Illinois fans rush the Memorial Stadium Field after Illinois upset Wisconsin on Oct. 19. The average attendance for Illinois home games has dropped from 45,644 in 2016 to 36,702 in 2019, according to the University of Illinois Division of Intercollegiate Athletics.

As the Illinois kicker prepares for a field goal, the camera pans toward the North Endzone, the designated student section. Fewer than half of the stands are filled, with a majority of students grouped together in the middle.

The last year the Illinois football program was able to accumulate an average home attendance of at least 50,000 was 2010. According to the University of Illinois Division of Intercollegiate Athletics, the average attendance for home games has dropped from 45,644 in 2016 to 36,702 in 2019, leading some to question where the culture of the student body and the University as a whole stands.

For years, it was a tradition for students to sit in the “Block I” student section. The original concept of “block” Saturdays was for Greek life students to purchase a block section of tickets for their group of members. Now, Greek organizations no longer associate block on Saturdays with football at all.

Bars such as The Red Lion, Joe’s Brewery and KAM’s began hosting “block” on Saturday afternoons. This time is reserved for Greek life organizations on campus that pay an upfront fee to have access to the bar without cover on Saturday mornings from noon-4 p.m.

Ajiri Oghale, senior in ACES, has been a bartender at The Red Lion for three years. As he regularly bartends during  block, Oghale sees firsthand the lack of enthusiasm for the football team by students.

“We do kind of miss out on that Big Ten atmosphere,” Oghale said. “You have the Michigan States, the Purdues, the Ohio States, where they have a really big sports culture, and that’s something that I feel like that we’ve lacked for a while now.”

The Red Lion offers many amenities to students Memorial Stadium does not: available alcohol, location and reliability. Block runs every week of the fall and spring semesters no matter if the football team is home or away, giving students a consistent activity to partake in on the weekends.

“A lot of people want to be in the social scene during the weekends as well as all of the deals that we have to offer,” Oghale said. “One thing that attracts a lot of people is $1 wells as well as $1 mimosas, so you kind of get a bang for your buck as well as you get to see all of your friends.”

During special occasions such as Dads Weekend and Homecoming, fraternities host tailgates at the home football games. Compared to the home game the week before, homecoming weekend in 2017 increased fan attendance by around 6,300 people.

The Division of Athletics noted the lack of Greek organization attendance and has been looking into how it can draw the attention of this distanced group.

It also has methods to attract other students all across campus. One of these methods is the weekly reminder email sent to students the week before a home game to offer $10 tickets.

Justin Acton, director of ticketing for the football department, provides input on what content the weekly email includes. Two emails are sent out each week, one on Wednesday and the second Friday.

It’s been five years since the Illini have made a bowl game appearance, and six years since they’ve won. Outside of team success, though, the Department of Intercollegiate Athletics looks at all of the contributing factors toward student attendance.

Cassie Arner has worked within the department for over 20 years, currently as the associate athletic director for marketing and fan development.

“We know that even with wins, there still are going to be other things that fans can look at and say, well, it was hard to get to the game (and) there wasn’t enough parking or concessions are too expensive or it was cold,” Arner said.

Arner knows the drop in attendance is a national trend as well, thanks to television and streaming accessibility. It has never been more accessible for fans to watch their sports teams from home.

In anticipation of more fans watching the game from home, the department polled fans at the end of the 2017 season asking how they can improve the facilities and what amenities they could offer. Their biggest request was beer.

In the spring of 2018, the program joined with around 50 other Division I programs to sell beer within their stadium. They also built a beer patio off of the student section to resemble that of a bar setting.

The department conducted additional research into other Division I programs where they associated school spirit with athletics. What it found was that schools with immense spirit also contained a large demographic of multi-generational students. Students at these schools were raised as fans of their parent’s college where they may expect their child to attend as well.

That is not the case at the university. The University currently hosts a little over 10,000 international students as well as a large percentage of first-generation college students.

“It’s not like we can ask people to completely change their culture,” Arner said. “We have to find a way for the cultures to coexist together.”

The department realized to increase attendance, it must acknowledge what sets the University apart from other schools across the country and teach the student body what school spirit means at the University of Illinois.