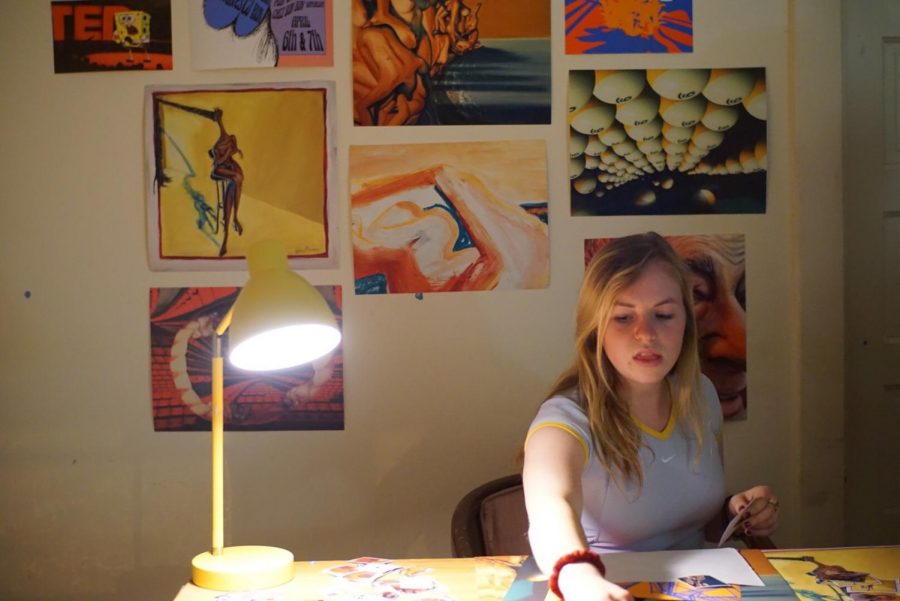 When Chantal Vaca found out RSO funding was included in student fees, she was intrigued, especially because she’s a co-founder of The Collective, an arts magazine and RSO.

“I had no idea that each student paid a set amount on their fees to the University. It’s not something that has been advertised or something that most students know about, and (it’s) even more weird because I run an RSO on campus,” Vaca said.

The Collective was founded in 2017 by cousins Chantal and Adriana Vaca and their friend, Emma Sielaff, to showcase students’ art and writing. Vaca, senior in Media and Illini Media employee, knew it was essential to become an RSO to reach the greater student body through recruitment events and also to reserve campus spaces for meetings.

“We knew that we needed it to be an RSO if we were going to be working with University students, so there was a part of that, like wanting to be able to participate in things like Quad Day, where we can promote our club and have people join,” Vaca said.

However, applying for University funding from the Student Organization Resource Fee (SORF) office has proven to be difficult and time-consuming.

“As a club, we have tried and talked about contacting SORF and getting reimbursed through the University, as does any RSO, if they want to,” Vaca said. The process was not what she expected.

SORF’s guidelines for reimbursements change annually, but the basics are the same — RSOs apply if they are “looking for extra funds to support their organization.”

“We haven’t done anything for grants, but the only way we have tried to get money is for reimbursements for things we buy for either parties or art shows or things like that,” she said. “They would give you 40% of the cost — like for us, they would pitch in 40% of the money that was needed to pay a performer or an artist.”

In 2019, both Vaca and Sielaff compiled the proper documents for SORF.

“You would have to come together with all these documents and receipts and then fill out the information for who was going to be reimbursed for all of it,” she said. “We did that once, just Emma and I, and they denied our first request, and this was the first launch of the magazine. Printing costs can be a lot, and we thought they could help out.”

Not hearing any word as to why the request was denied, Vaca met with a SORF representative, who helped her organize her files and to meet the requirements. When she submitted it again, she never heard back.

Frustrated with the slow bureaucratic process, Vaca says she didn’t think all the trouble was “worth it.”

“It makes it difficult for us to want to fundraise through the school, and that sucks because different fundraising things, like thrifts on the Quad or at Quad Day, have been a large part of how we make money and can do the things we do,” Vaca said.

SORF’s steps on their website seem easy enough to follow. They list four steps on the main page of their website — “Apply, Review, Approval and Reimbursement.” According to the site, SORF “may make adjustments to funding accordingly. Funding is always subject to the availability of funds, which is assessed on a semester basis.”

But just why things get rejected or why students, if they do receive funding, receive it so late, has been a topic of conversation among different student RSOs, like the Collective.

Different groups on campus are just as popular and require just as much funding, but like The Collective, they cannot get through SORF’s process. This is frustrating for the executive board to navigate but also for the general members of the club.

Bella Scott, sophomore in FAA, has been a part of The Collective for more than a year. Scott acknowledges it is not a large RSO with around 30 members, but it has an active group of members. People join the club or know people in the club, and that attracts a lot of attention, and more people coming to house shows or parties.

But the University hasn’t made it easy.

“Because we aren’t a large RSO, it can be hard to fundraise. We do have to watch our budgets because of the lack of funding from the school, but we balance that with fundraising with thrifting or charging cover at house shows and galleries,” Scott said.

Jenny Smith, junior in ACES, loves going to The Collective events on campus and knows any money she does donate or pay for cover will go back into the magazine.

“I feel good about having to pay the $5 cover because I know it goes into like decorations or, like, renting something out, paying the artists and bands, stuff like that,” Smith said. “It’s worth it.”

She’s drawn to the events because of the art people she gets to be around, the art she gets to see and the experience she has.

“The vibe is always good, and it’s just everyone in a room appreciating the artists and the art,” Smith said. “There, for the parties, is usually a theme, and they do a really good job putting things together. It’s a good place for people to express themselves.”