Pen-Friend brings together a quarantined community 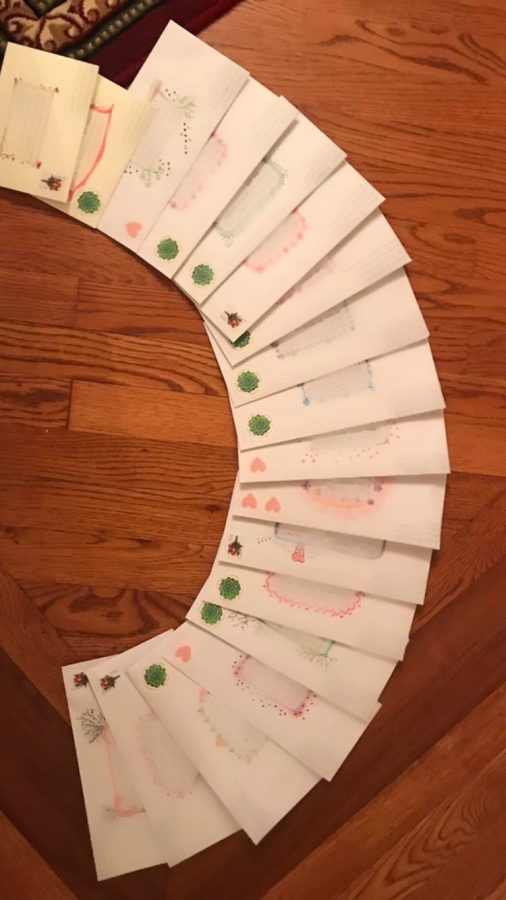 As families battle over Wi-Fi usage and data overages loom in many students’ futures, an electronic-free method of communication may seem more and more appealing. It could help connect students more personally during this time of isolation and social-distancing. The new UIUC initiative, Pen-Friend, fills this need by connecting college students across the country to promote positivity and relationships during these difficult times.

Banu Gulecyuz, a junior in Business, had this brilliant idea after receiving a thoughtful letter from one of her close friends.

“In the midst of quarantining and stress with the situation that our world was in, I felt an immense joy at receiving a letter from her,” Gulecyuz said. “The feeling of holding a physical letter was so thoughtful and put a smile on my face for the rest of the week.”

The innovative marketing student was immediately inspired, writing letters to over a dozen friends, then crossing generations by adding her grandparents and even former teachers. Eventually, Gulecyuz had sent 30-40 letters and said she “felt less stress and more connected emotionally with the people I was writing to. It allowed me to express my thoughts fully rather than through text or FaceTime.”

However, Gulecyuz said she wanted to extend this initiative beyond her own friends and family and make a difference for college students around the U.S. She said she knew students felt stressed by the pandemic and wanted to connect with others around the globe in a meaningful way.

Particularly inspired by her parents in the medical field, Gulecyuz wanted to contribute to the effort against the virus and its effects when she began Pen-Friend.

With marketing and journalism classes under her belt and a talent for promotion and writing, Gulecyuz sought to broaden her support and pitched the idea to Project Covalence, an innovative group that supports projects to combat the negative effects of COVID-19.

Pen-Friend is not limited to students at the University; Gulecyuz reached out to students from other universities and even around the world.

“I started reaching out to other universities at first through my close friends who attend other schools and asking them to promote the initiative on their University’s Facebook pages,” Gulecyuz said. “I will also reach out to mental health centers around the country for them to share with their students as well.”

Currently, more than 65 students have signed up within the first two days to receive a penpal, including Emma Eberhart, junior in Business, and Gulecyuz’s original source of inspiration for the initiative.

As she sent her first letter as a participant in Pen-Friend this week, Eberhart reflected on the importance of written correspondence.

“Letter writing is something that has always been a creative outlet for me and a way of keeping in touch with friends in a really handcrafted way,” Eberhart wrote. “It still continues to be an outlet for me in that way now, only I am sending a lot more letters these days to keep in touch with those whose physical presence I am missing.”

She highly recommends the program to each college student.

“It has added an element of fun and relaxation to my quarantine experience, which is definitely keeping me in positive spirits,” Eberhart said. “It’s an opportunity to make a new friend, discover something new, and be a support system for other students during this time.”

Eberhart also stressed the importance of reaching out to those quarantining alone or those who deserve our thanks, stressing that Pen-Friend and letter-writing foster relationships with the elderly, first responders and other college students around the nation.

Similarly, Nora Osmani, a sophomore in Engineering, signed up for the program because she believed it would help spread positivity during quarantine.

“I know it will have such a positive impact on my time in quarantine and I will be able to hopefully brighten up someone else’s quarantine experience,” Osmani said. “I would definitely encourage others to do this because it is such an easy way to help others and contribute in your own way to the pandemic.”

As the Pen-Friend program grows in popularity and participants, Gulecyuz said she hopes that “this program brings people together and allows college students to look forward to something: receiving a letter, making a friend in a wholesome and deep/emotional way to alleviate stress by writing their thoughts out. I hope this positively affects their mental health … (and) allows people to feel empathy and a connection through understanding what others are going through—that we are not alone in this fight against COVID-19.”