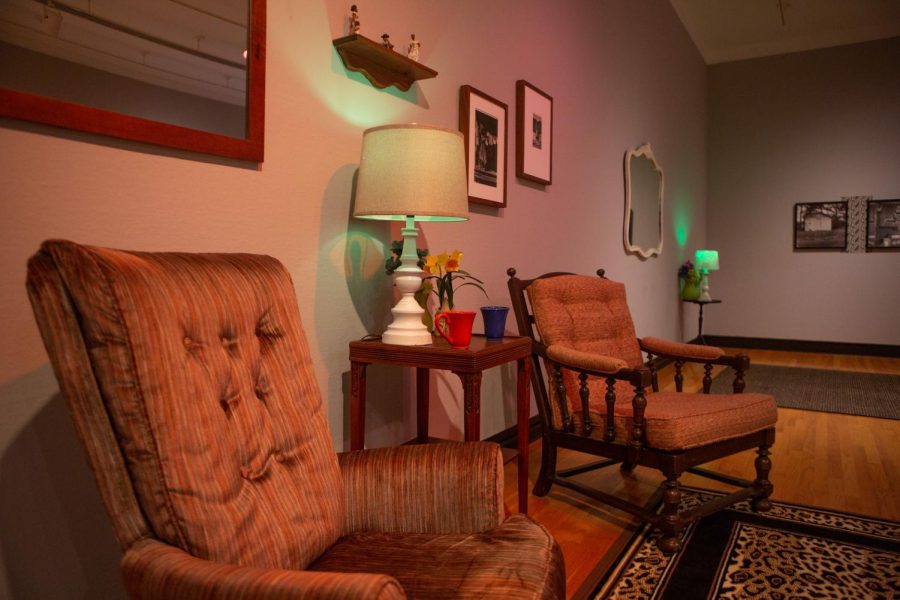 Part of the Homemade With Love: More Living Room exhibit rests on the wall at the Krannert Art Museum on Wednesday morning. The exhibit opened on Aug. 27.

With museums and exhibits closing due to the evolving pandemic, it can be difficult for curators to create spaces that can easily reach and inspire a wide audience. However, the “Homemade with Love: More Living Room” exhibit in Krannert Art Museum still holds a far-reaching impact on its audience.

Blair Ebony Smith, curator and scholar in Art & Design, coped with the challenges these times bring to develop an exhibit from start to finish that envisions spaces where Black girls can be heard and centered.

“It really questions how we can make space for Black girls’ creativity and what that looks like,” Smith said, referring to her finished space. “And so that’s kind of what I started with, that’s the question I wanted to ask, and to think about curating the space that really leans in on Black girls, women and femmes’ interior lives and creativity and how we imagine our worlds.”

Smith was inspired by literary influences as the individual elements of her exhibit came together.

“Texts that I really leaned on were Homemade Love by J. California Cooper,” Smith said. “She writes a lot of texts and short fiction essays that think a lot about the everyday lives of Black people and Black women. Homemade Love in particular is thinking about how we as Black people imagine, create and make home what it takes to do that.”

In partnering with Saving Our Lives Hear Our Truths, an organization driven to celebrate Black girlhood to add to the exhibit, Smith also took influence from poet and writer June Jordan.

“June Jordan is someone that we bring in SOLHOT a lot in thinking about how to celebrate Black people, Black youth, Black girls, and she has children’s books that are also exhibited in the space and one in particular is called New Life, New Room,” Smith said. “These particular texts really stretch my imagination on how young Black youth with the many living conditions they have created space.”

Focusing on how Black women create this sense of home and how they go about doing that motivated Smith to curate the space into a living space with homemade pieces as an intimate glimpse into their daily lives.

However, Smith hopes that the exhibition will reach beyond domestic space and into the public sector as well.

“I think that’s usually what people think when they see the exhibition or they they read about it, they usually are thinking about like home or domestic space like family is definitely a part of that,” Smith said. “But it’s also for me a space to imagine even beyond that like so how do we imagine our neighborhoods, how do we imagine community, how do we imagine a world that that believes in, in Black girls creative knowledge and genius.”

This message has certainly resonated with viewers. Since its release in late August, a virtual opening, a movie screening and candid conversations with the artists behind the scenes took place, in which the virtual climate was used to make an impact.

“As students were coming to campus, (the gallery) was really talked about,” Kelly said. “The only difficulty is that even when campus was open, students have had so few in-person experiences that this semester we haven’t had as many students actually coming by to see the show.”

Usually they have a large opening called KAM Fest with thousands of students in galleries at the launch of new exhibits, but Kelly thinks that the smaller scale will establish intimacy and personal connection to the show.

“Students are coming into the space and discovering Homemade with Love very quietly,” said Kelly. “There will be one or two people actually sitting on the furniture and making themselves at home, which is really different than what students and other types of visitors would normally experience.”

Krannert Communications Director Julia Nucci Kelly has high hopes for the months ahead, as the exhibit continues to draw a wide variety of audiences and further spread its inclusive and impactful message.