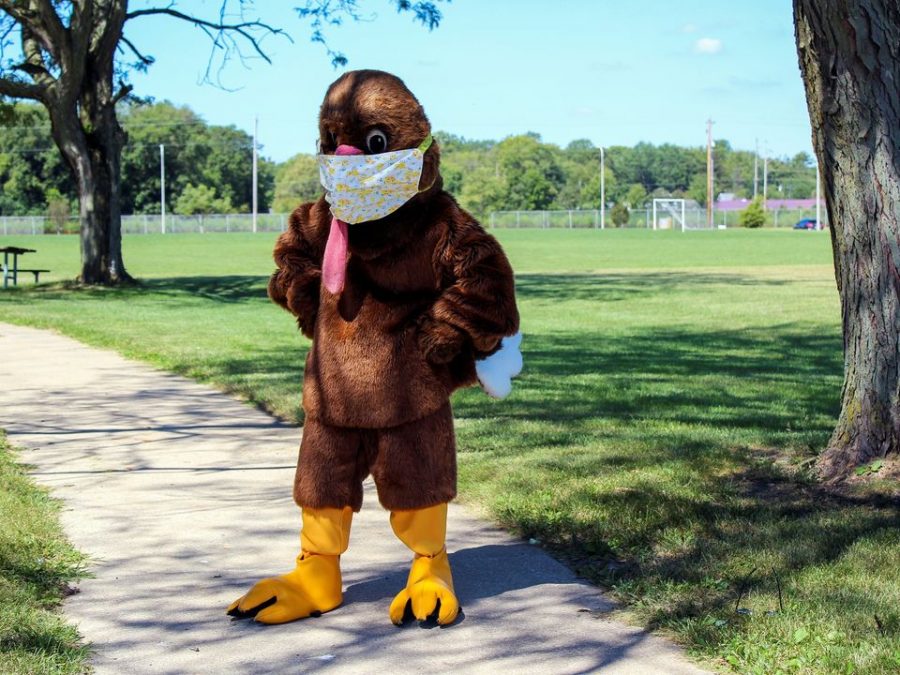 A person dressed in a turkey costume poses for a promotional image for the 2020 Turkey Trot. The event will be held virtually this year.

Every Thanksgiving morning for the past several years, nearly 2,000 runners have showed up to Urbana’s Crystal Lake Park to partake in Urbana Park District’s annual Turkey Trot. Participants run, walk or roll along the mile-long course, getting their steps in before celebrating returning home to celebrate the holiday.

Unfortunately, thousands of people gathering in a park is a thing of the past for the time being. This year, the Urbana Park District has decided to hold the annual Turkey Trot virtually in order to keep the tradition alive while still honoring social distancing guidelines.

Instead of holding a singular event on Thanksgiving morning, the Urbana Park District has expanded the event to encompass the entire month of November. Participants are encouraged to complete their one-mile course either by themselves or with people in their immediate social circle on their own time, whenever they see fit.

While the Turkey Trot was officially announced as a virtual program with the release of Urbana Park District’s Fall program guide, the idea to hold the event virtually has been floated since the pandemic began in mid-March. Elsie Hedgspeth works as the Phillips Recreation Center outreach & wellness manager. Hedgspeth is in charge of organizing the Turkey Trot and explained how due to the event’s size, the decision to move it virtually has been a long time in the making.

To keep a sense of community alive while running the event in such a distant format, Hedgspeth set up a Facebook page for participants to share mile times, race photos and memories of Turkey Trots in the past. While participation has been low thus far, she believes participation will increase closer to Thanksgiving.

The Turkey Trot isn’t the first Urbana Park District fun-run to be shifted to an online format. In July, the park district held its “Power of Parks” 5k virtually due to lockdowns and social distancing guidelines.

Fun-runs aren’t the only events that have been shifted to a virtual format because of the pandemic. Hedgspeth, along with Phillips Recreation Center outreach & wellness coordinator Ashley Denis, worked hard to ensure Urbana residents would still have programs during the initial lockdown back in late spring. Hedgspeth and Dennis held virtual exercise classes three times a week, and despite lockdown restrictions loosening since then, have continued to hold the class once a week.

“When we closed down back in March, we closed everything down,” Dennis said. “The point of our job is really to gather people together, so anybody whose goal is to do that with their work is hurting right now. We’ve found other ways. We’re getting more used to virtual platforms and doing some classes through those.”

In addition to holding virtual events and classes, the Urbana Park District bought a mobile activity vehicle — affectionately named “Urvana” — intended to drive out to communities and provide free programming. The van was purchased before the pandemic limited in-person gathering, so instead of letting the Urvana go to waste until next season, the park district turned it into a personal protective equipment delivery system, delivering masks, hand sanitizer and gloves to the community.

With the pandemic casting a dark cloud of uncertainty over the past year, Hedgspeth emphasized the important role parks played in helping people through the difficult time.

“Under the strictest of shutdowns, our parks and green spaces were something that was ok,” Hedgspeth said. “It was something that was allowable. People could get outside. We have people counters in some of our parks, and park usage was up exponentially throughout all of this. We truly think that parks have power, both for your mental, emotional and physical health.”