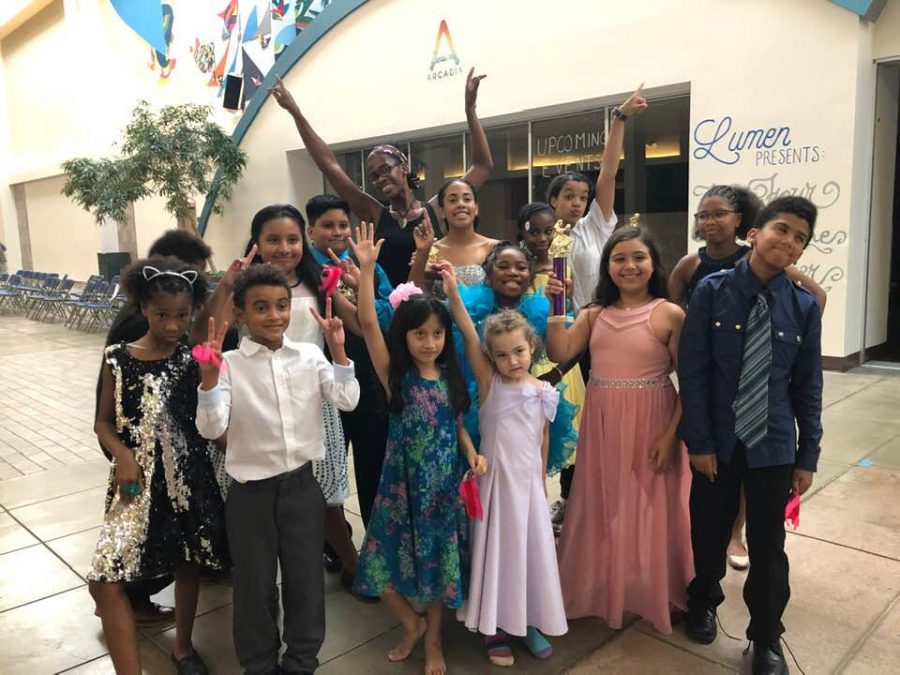 Ja Nelle Davenport-Pleasure poses with the group of kids she taught to ballroom dance at the Lincoln Square Mall, on Aug. 18, 2019.

She carries out this mission of joy as an artist and community organizer. Her work, and the light she suffuses into it, has captured the hearts of the community in recent years. In November, she was named this year’s winner of 40 North’s Artist Arts, Culture and Education Award — for her “endless talents” and for “inspiring the community through her passion.”

“I’m not joking — I am so in awe,” Davenport-Pleasure said. “It really is a humbling thing to have people recognize my art, and it makes me feel so loved.”

Davenport-Pleasure works recycled materials into sculptures — slim paper dolls that stand with remarkable strength and spirit. She is the self-published author of “Eyes Open,” a small, dazzling book of poems. She is a longtime and formerly semi-professional ballroom dancer. She is, inarguably, a person worthy of attention and awards.

Apparent as her talents may be, Davenport-Pleasure was surprised to be recognized for them in such a formal way. For her, art is an inner endeavor — taken up not for other eyes, but for her own heart.

“I do my art as therapy for myself,” she said, “to heal my own heart, and to look for ways to kind of just be.”

Indeed, Davenport-Pleasure has lived the kind of life—the beautiful, at times profoundly painful kind of life—that taught her to facilitate her own healing. She navigated experiences with emotional abuse that nearly severed her connection to her inner voice. In 2018, she suffered a stroke that left her with hands that wouldn’t quite listen to her brain. Through everything, she reached for art to identify, express, and move through her pain.

After her stroke, her impaired dexterity closed many of her artistic outlets. Sewing, for example, demanded impossibly fine motor skill. Aimlessly, she started rolling up pieces of paper to keep her hands moving.

“My fingers didn’t hurt when I was doing it,” Davenport-Pleasure recalled. “So I wondered, ‘How can I turn this into something that I want to look at later?’”

They started out as plain paper dolls, as tall as the length of her palm. She began painting the dolls, coloring them with her own stories. The small figures became embodiments of important women from Davenport-Pleasure’s life, and of her relationships with them.

“I started making dolls that kind of represented the feeling that they gave me,” she said. “Some of it was traumatic, but some of it was really beautiful.”

A year passed, and Davenport-Pleasure continued to heal in art. In 2019, she applied for the Urbana Arts Grant. She had a vision — one that arose from memories of being a young girl who loved to dance and couldn’t afford to learn: 10 boys and 10 girls, kids from the local community for whom ballroom dance lessons were an expensive impossibility. She would teach them, they would perform, and they would know what it was like to dance in the spotlight.

The grant was hers. Urbana pulled together, in its colorful, compassionate way, to realize the vision. Salt & Light donated gowns and suits; Lincoln Square Mall offered a performance space; Urbana Public Television (UPTV) made local celebrities out of the little dancers. And Davenport-Pleasure, of course, had the time of her life welcoming the children into dance, into art—into sunshine and ponies.

“It was a dream come true,” Davenport-Pleasure said. “I felt like a kid in a candy store watching these little kids do something they had never done before, and just — they just glowed.”

Her quiet self-healing became something more. In an ironic and wonderful twist, her journey inwards nurtured her outward connections in a sort of symbiosis. To find one’s voice, after all, is to use it—to be heard, and to join conversations and choruses.

Davenport-Pleasure found a safe creative space, and even more, she found her part to play — a part she could be noticed and appreciated for, though she is still learning to accept this recognition.

Like Davenport-Pleasure, Luke Matias is not in the habit of seeing himself. Matias is a junior at Parkland College studying Communications, and he has the resume of someone years older than he is. To his bewilderment, he was named the winner of this year’s Student ACE Award.

In fact, by anyone’s judgement, Matias is exactly the type of person to receive awards — certainly by the Canopy Club’s judgment, where he worked improbable hours as a sound engineer up until the club’s last live show in March, and certainly by Parkland College’s judgement, where he acts as marketing head and sound engineer at the student-staffed record label, Perimeter Road.

While Matias’s contributions sit comfortably in his own blind spot, the ACE Awards Committee recognized his “thirst to learn as much as possible about sound, music, recording, production and more, combined with an eagerness to participate and contribute to our local music scene.”

His indifference to the spotlight is consistent with his work. His job as a sound engineer placed him far across the room from the stage, at the soundboard’s shadowy helm. Audience eyes stayed fixed where the lights directed them, but their ears took in Matias’ engineering. They heard the artist in the particular way he believed the artist should be heard.

From July 2019 through February 2020, Matias worked every Monday open mic — those are the nights that largely defined his time at the Canopy Club. He would arrive at the soundboard at 8 p.m. and tuck it back under its cloth covering at 2 a.m. In between, he would engineer and adjust, shaping and shifting sound as artist after artist took the stage. He loved the revelation of learning each new performer’s sound in real time.

“Anybody can come in and defy expectations,” Matias said. “You can only learn so much about a person before they step onto the stage and speak into the microphone, or start playing their instrument, or start playing a track.”

During these one-and-a-half years, many of these performers became friends of Matias’ and friends of each other. This is the way of music in Champaign-Urbana, and it is how the local music scene has formed and reformed itself through time.

It is through self discoveries and connections among artists that they are able to seek and share joy. They find the quiet courage to do brilliant, ACE Award-winning work.

Matias holds a deep appreciation for this creative community. He has met friends and mentors — people who he believes have taught him precious lessons in life.

“I do think it’s pretty much changed my whole life,” he said, “and I don’t mean that in any less than complete, genuine honesty.”