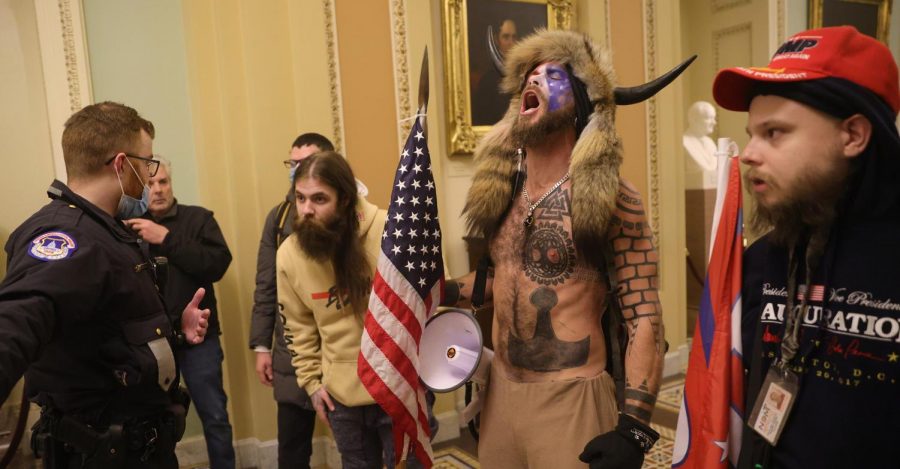 Supporters of President Donald Trump interact with Capitol Police inside the U.S. Capitol Building amid a riot in Washington, D.C., on Wednesday.

Around 2 p.m. on Jan. 6, a swarm of Trump supporters sieged the Capitol building amidst the electoral vote count by Congress. Around 3 p.m., Barrett Wynn, sophomore in LAS, had just gotten home from walking his dog, received texts about the Capitol breach and eventually packed his backpack to get to Washington D.C. to cover the scene.

“As soon as I realized what was going on, I packed up my backpack and sped to D.C. as fast as I could,” said Wynn, who is also a WPGU News team correspondent.

At a rally near the White House before the siege, President Donald Trump said, “We are going to walk down to the Capitol, and we’re going to cheer on our brave senators, congressmen and women, and we are probably not going to be cheering so much for some of them. Because you will never take back our country with weakness.”

Almost immediately, the march on the Capitol would break through police barricades and advance to the evacuated chambers of Congress.

Amidst the chaos on the National Mall, Wynn took to the streets to cover the events and trying to interview people.

“This is definitely going to end up in a history book somewhere. I feel this is the most dramatic moment in our political history under the Trump administration,” he said. “We shouldn’t be all that surprised at this. I think the signs that something like this have been on the horizon for a long time.”

Once arriving in the city, Wynn began to see the protest in action.

“It’s actually funny, because on the highway leading into D.C., you wouldn’t have known anything was out of the ordinary. Traffic was jammed as usual,” he said.

Wynn said he started noticing signs of unrest as he arrived about a block away from the National Mall. After parking his car, he said he continued on foot witnessing what he said he assumed were Trump protestors leaving the area.

As he continued walking towards the Capitol building, he faced a significant amount of foot traffic moving in the opposite direction. Many of the people carried Trump flags, wore Trump beanies and a number of other pieces of Trump memorabilia.

“By the time I got there, the initial breach had come and gone. The Capitol police had cleared the building for the most part,” Wynn said. “One thing I think was funny in hindsight was I wasn’t really thinking of the board political implications of what was going on. I just got there, I hit the ground running, so focused on getting interviews and keeping people informed on what was going on. I didn’t really take a minute to reflect till a couple hours later.”

Wynn said he is still processing the events that unfolded and simply doesn’t know what long term implications this will have on the political scene for years to come. He did say he has some lingering fears.

“I do expect something like this is going to happen again … ever since the election there has been this sense that the republican party is beginning to fragment and move away from Trump’s brand of politics, and it only seems that this is pushing that further,” he said.

With other student journalists starting their careers in the chaos of the American political theatre, Wynn gave advice to those entering such a world given his frontline experience.

“The most important thing as a journalist is to keep your feelings out of it. I know that sounds very obvious and redundant advice. I think what served me best in obtaining interviews was that I made sure the people I was speaking to made sure that I was here to report on what they say, not to put their words into my narrative. When I went up to these people, I approached them saying ‘I am a student journalist, I just want to know what the word on the street is,’” Wynn said.