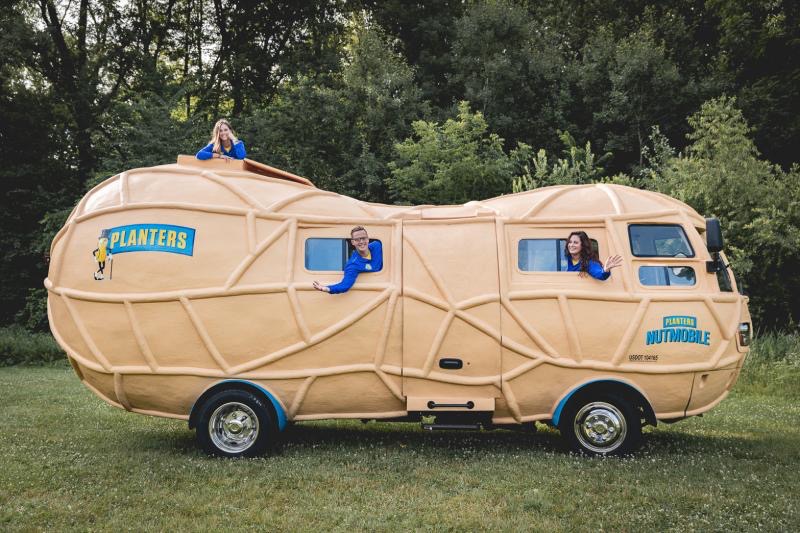 The Planters Peanutters wave from the Peanut Mobile while on the road. Tyler Towne, one of the peanutters, along with his coworkers recently made a stop in Champaign.

Every year, nine recent college graduates pack up their belongings and hop aboard one of the three Planters Peanuts NUT mobiles for one year. This peanut-shaped vehicle is bright yellow and travels across the country promoting the Planters Peanut brand. For the past several years, at least one Illini alumn has been one of the nine Peanutters.

The most recent of the Illinois Peanutters is Tyler Towne, or Ty the Nut Drivin’ Guy (his designated Peanutter name), who is in the middle of his year-long position. Towne graduated in late May from LAS with a degree in communications.

“We drive across the country on our 26-foot-long peanut on wheels making people smile,” Towne said. “We do that through a couple different ways, primarily through community service efforts, or small community-based events.”

Towne’s experience has differed a little from previous NUT mobile drives because of COVID-19. They started in July instead of June and have had to focus on smaller-scale projects as opposed to large events.

Several aspects of the job convinced Town to accept the position.

He represents a large brand every single day. He gains experience in marketing and media as he appeared on radio and TV to talk about Planters. He is responsible for planning events and schedules. In addition to all this, he is paid to travel the country for a year.

“I thought it was kind of a unique and interesting opportunity,” he said.

He first heard about this opportunity in one of his public relations classes as a senior when the Peanutters came to recruit soon-to-be alumni.

One of those in the class recruiting new Peanutters was Dan Corry, or Pecan Dan, an Illinois graduate from the class of 2019.

Corry graduated in May of 2019 from the College of Media with a degree in advertising. He worked with the NUTmobile from June of 2019 to June of 2020.

Just like Towne, Corry was in a team of nine Peanutters who were split into teams of three. Each team was assigned a region where they would work before switching up around the six-month mark.

“I think some of the most rewarding days were when we were at places we had no idea existed and realized that there was a whole culture that we got to step into,” Corry said.

One particularly memorable town was Plains, Georgia where Corry’s team went for The Peanut Festival. Corry and his fellow Peanutters were surprised to realize that this festival was large enough to attract former President Jimmy Carter as their officiant.

During Corry’s term, Planters Peanuts also made national news when they released a dramatic film killing off Mr. Peanut ahead of their Superbowl commercial slot. Corry said the branding for this stunt was intense.

The team set up a funeral for two weeks in between his death and rebirth.

“They shelled out for that campaign; gave us a full new uniform of an R. I. Peanut shirt, prayer candles, funeral wreaths and stuff like that,” he said. “We made national news, got to do live television … that was a very unique experience for my year that I’ll never forget.”

Corry was also brought to this opportunity by yet another Illinois alumni, Bradley Smith, who graduated in 2018 from the College of Media with a degree in advertising.

Bradley worked with the NUTmobile from 2018 to 2019 and went by the name Peanut Brittle Brad.

“It was a shell of a time, as we like to say in the peanut butter world,” Smith said. “It’s something that I will never forget.”

Currently, Smith works for Children’s Miracle Network Hospitals as a program development manager. He said his experience as a Peanutter has opened doors for him professionally because it was an instant conversation starter.

This would then give him the opportunity to talk about all his other skills and accolades. Smith connected a lot back to the skills he learned at the University. He also said that is part of the reason why Illinois students are so frequently chosen to be one of the nine members aboard the NUTmobiles.

Smith said he wanted to recruit from campus because, “As an Illinois alum myself, I knew the work ethic and the assiduousness of Illinois students.”

The current NUT mobile drivers are working to recruit the next group of Peannutters. The iconic bright peanut car was on campus the last week of January, with Peanutters visiting classes and sharing the opportunity with those graduating in the next couple of months.

“It’s such a special program and I wanted to share it with the people that mattered,” Smith said. “I think, for me, that was my fellow classmates and future generations of Illini that could go through this experience and truly embark on an adventure of a lifetime.”