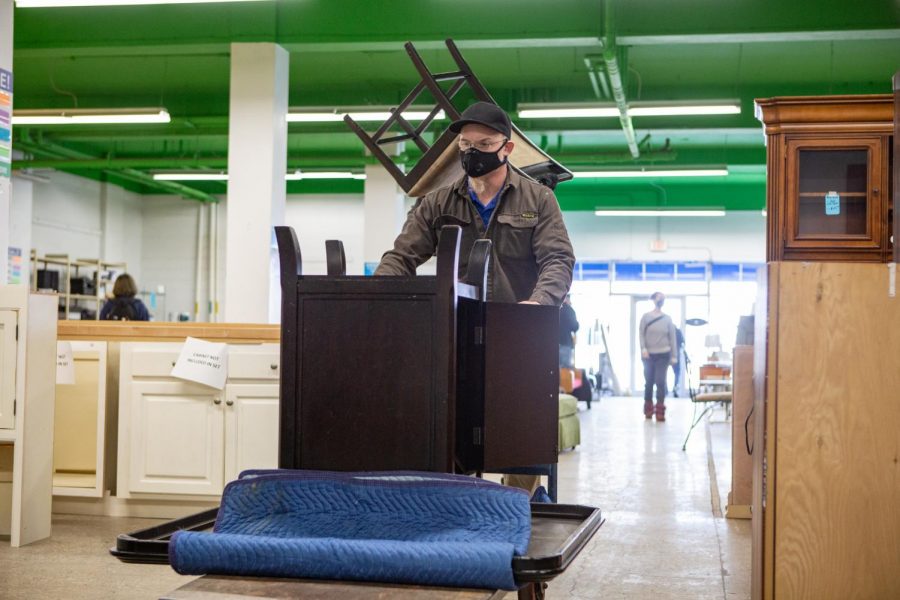 Habitat for Humanity ReStore worker Lloyd Addison wheels a cabinet towards the loading dock for a customer on Wednesday morning. The store has had to adapt to the COVID-19 pandemic.

The Habitat for Humanity Restore stands tall at 119 E. University Ave. in brick and cobalt blue. Its three floors hold colorful collections of used furniture, construction materials and household goods. Proceeds are used by Habitat for Humanity of Champaign County to build homes for low-income families.

Since its summer reopening after a COVID-19 shut down in March, the store has managed a modest return. Still, the blow of the initial closure stings in the ReStore staff’s memory.

Sam Auterson, ReStore manager, recalled the shock of the moment.

“It didn’t seem real,” Auterson said. “No one really knew the magnitude of what was happening back then.”

Auterson has been with the ReStore since 2014—first as a cashier, then as assistant manager, and now as a store manager. She has made many important moves for the store, including launching its social media pages and growing its volunteer program.

Auterson took over as store manager in February 2020. Before she had a real chance to carve out her new role, the store closed. The staff that returned months later was only a fraction of Auterson’s original team.

“We were a really tight-knit staff,” she said. “It was heartbreaking.”

A full-time staff of four led the reopening, with the added challenge of enforcing new safety protocols. Auterson struggled to set boundaries for her staff. While mask-wearing and social distancing were non-negotiable, she feared for her team’s safety in encounters with hostile customers.

Despite these challenges, Auterson found relief in a reunion with the ReStore family. She was especially thankful to see the faces of regular customers, many of whom were daily visitors before the shutdown.

“Seeing them come back for the first time was really exciting,” Auterson said, “just to make sure that they were okay.”

Su has been volunteering at the ReStore for almost seven years, testing electronic donations and pricing them for resale. These days, he works only when the store is closed and empty—a small, though the heavy price to pay for the safety of social distancing.

“I really enjoy the conversation and banter,” Su said. “I miss seeing everyone.”

While Su’s professional work centered on software, he has carried a fascination with electronics since he was a teenager. At the ReStore, he indulges this passion freely.

Su finds a new puzzle in every old electronic that finds its way to his testing area. He has rescued a variety of items with his careful tinkering, from big-screen TVs to vintage stereo amplifiers.

Coupled with his love for electronics is a dedication to Habitat for Humanity’s home-building mission. Each repair is another sale for the ReStore—and each sale is more money for Habitat homes.

In the past, Su enjoyed volunteering alongside Habitat homeowners and hearing their stories. He empathizes with Habitat families’ search for security and well-being, especially as an immigrant from Taiwan.

“The homeowners’ enthusiasm and hope for a better future are infectious and inspiring,” Su said.

Lauren Gramly, Resource Development Director, also said she felt a personal commitment to Habitat for Humanity’s mission. She works upstairs in the ReStore at the Habitat offices, raising funds and visibility for the organization.

Gramly came to Habitat in Fall 2018. She brought with her the experiences of a divorced mother struggling to secure housing for her family. In those years, it struck her that even with a steady income, the housing market was near impossible to navigate.

Gramly’s work at the ReStore is enlivened by a love for antiques. Over the past 20 years, she has found treasures at estate sales, flea markets and garage sales galore. She believes deeply in buying used and vintage items.

A few weeks after the ReStore closed last spring, Gramly realized the pandemic would require quick and careful adaptation. She pondered the next move that would keep the store’s sales coming and the home-building funds growing.

Gramly put together the ReStore’s online store, building up a diverse catalog of items from scratch. This practical move became a personal pursuit for Gramly as she found joy in crafting quirky item listings.

With the online store, Gramly had the opportunity to feature one-of-a-kind items—the kind whose value might not be so obvious sitting unmarked on a shelf. Gramly has sold some of the ReStore’s most precious and peculiar items through the online store, from a $200 sixties Barbie doll to a fan art portrait of William Shatner.

Nearly one year after its initial closure, the ReStore team has found a strong footing in this new landscape. They stay grounded in their goal to raise funds for Habitat homes.

“I’m grateful for my staff and their hard work,” Auterson said. “And I’m excited to see what the future holds.”