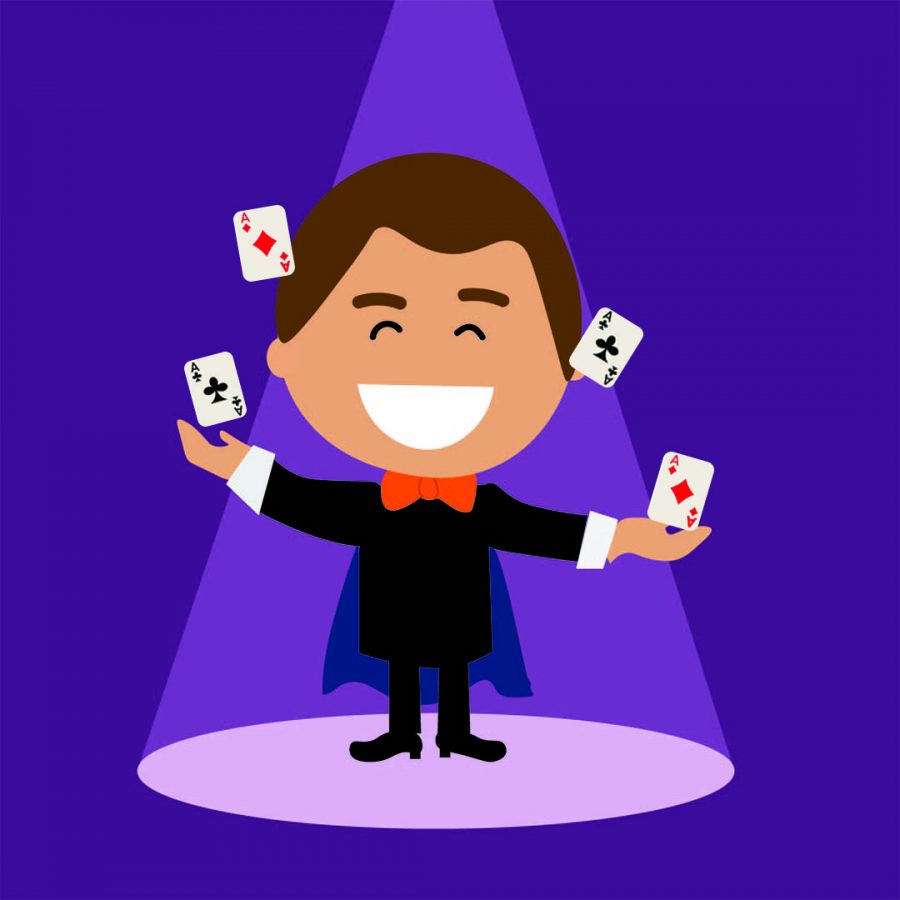 Carlos Martinez, sophomore in ACES, opened a fresh deck of cards. His Zoom camera was positioned at an overhead angle, so the viewer could clearly see his hands and cards. He separated the four kings from the deck and asked his audience to name a card.

“Seven of hearts,” said one viewer.

Working alone, Martinez dubbed the four kings his “assistants” and told the viewer that his assistants will find the card. After a quick shuffle of the deck, he showed the viewer all four kings face-up, then turned three of them face-down, leaving the king of hearts face-up, and puts the kings off to the side.

With a flair of showmanship, Martinez fanned out the deck of cards. All the cards faced down, with the exception of the seven of hearts.

The trick was not over, however. While talking to the viewer, he went to flip over the three face-down kings the viewer saw moments ago. The three kings had turned into the three remaining sevens.

“I can’t tell you, or the Illini Magic Society will terminate me from the group,” Martinez said.

Martinez is vice-president and one of the founding members of the Illini Magic Society, an RSO for magicians interested in tricks and illusions to socialize and work off each other to better their craft.

When Martinez was in high school, he learned magic as a way to break the ice after joining the speech team. He was the only junior on the team and thought performing magic would lighten the atmosphere. When one girl on the team knew all the tricks Martinez performed and revealed how the tricks were done, he decided to one-up her and use Thanksgiving break to learn more advanced tricks.

“By the time I got back to school to show her, I didn’t want to stop learning,” Martinez said.

During Martinez’s freshman year at Illinois, he was shocked to find out there were no magic-related RSOs. Martinez asked around in different class group chats if anyone would be interested in an RSO, and by the spring of his freshman year, a small group of magicians would meet at the Illini Union to socialize and share tricks they’ve been working on.

This semester is the Illini Magic Society’s first semester as a fully-registered RSO. At each meeting, magicians in the group share tricks with each other, practice performance skills and occasionally learn from a guest speaker. Meetings are casual, and members are encouraged to share what they’ve been working on in a supportive, constructive environment.

Michael Madiol, sophomore in Engineering, is one of the Illini Magic Society’s co-founders. Madiol said he believes magic is a performance art built around social interaction. Meeting with other people who share the same passion for magic allows Madiol to hone in on his performance skills.

“What I look for in magic performance is taking the focus away from it being a magic performance, and focusing it on it being more of a social interaction — just talking with someone,” Madiol said. “The magic trick is just a way to convey what you’re saying. I guess you could call it crowd control, just being able to talk with the people you meet and have an enjoyable interaction with them and making them excited through performing a magic trick.”

“One problem we’ve faced (on Zoom) is that we can’t really rely on (the audience’s) reactions anymore,” Martinez said. “Because I have my laptop above me, I can’t see (the audience’s) faces anymore. It’s not as motivating to do magic through Zoom, unless you have the proper equipment and you can hear and see the other person’s reaction.”

As a relatively new RSO, the Illini Magic Society is looking to grow its membership. Their last Zoom meeting had seven attendees, and a discord channel created by the group has garnered 20 participants. Martinez said he hopes the group continues to grow in the future, and serves as a welcoming environment for anyone interested in magic, card juggling or illusions of any kind.

“I’ve met quite a few people who are interested in relearning magic, because they learned magic when they were younger but they stopped when they got to high school,” Martinez said. “They would retain some tricks but forget most of it as the years go by. We’re hoping that we could continue to inspire the kid inside them so they would continue to learn magic.”