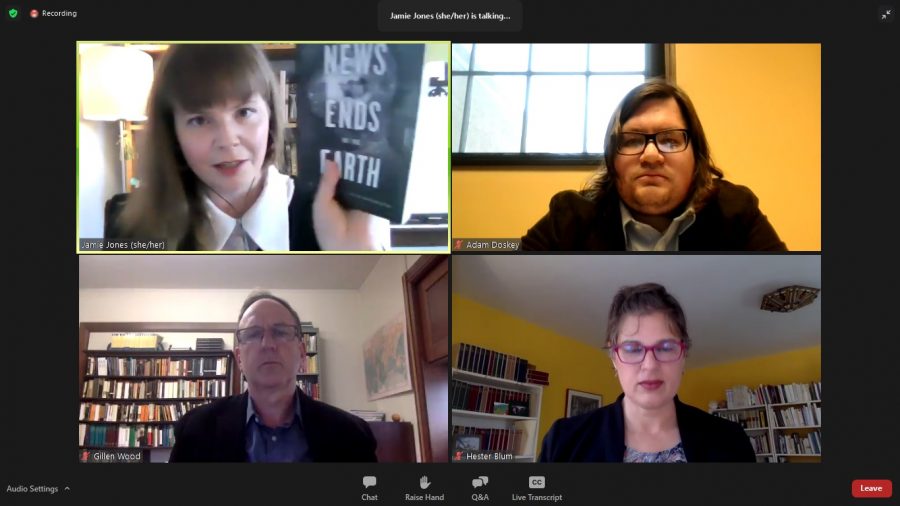 During this time last year, many events and symposia scheduled at the University were postponed indefinitely due to the COVID-19 pandemic. Now, adapting to the lasting effects of the pandemic, Zoom conferences have become the academic norm. On March 26, academics from The University of Illinois and Penn State University joined over Zoom to discuss climate change, polar expedition and print culture.

The symposium, entitled “The Ends of the Earth: Polar Exploration, Print Culture, and Climate Change,” was sponsored by the University’s Rare Book and Manuscript Library, the Trowbridge Initiative in American Cultures and the University’s Institute for Sustainability, Energy and Environment. The event showcased recent scholarship at the intersection of literary studies and environmental humanities.

When the symposium was originally planned to be held in the spring of 2020, part of the day’s activities would be to allow attendees to interact with artifacts from the University’s Rare Book and Manuscript Library. Instead, artifacts were displayed over Zoom.

“When we first conceived of the symposium in 2019, hosting it in the rare books and manuscripts library, and providing the audience with access to the collection was a major part of our plan,” Doskey said. “However, as we enter the second year of the pandemic, we’d like to share some of our collection highlights and new acquisitions in this virtual form, hoping that you will come to visit us when you’re able to do so.”

Following Doskey’s presentation, it was handed off to Hester Blum, a professor of English at Penn State University. A Guggenheim Fellow, Blum has authored four books, including her most recent book entitled “The News at the Ends of the Earth: The Print Culture of Polar Exploration.”

“There were 40 members of the Northwest Passage Project in total, including undergraduate scientists from minority-serving institutions, a documentary film crew and two Inuit early-career scientists,” Blum said. “I was the only academic humanist on the ship. Human-caused climate change is of searing urgency in our present moment, and the science of climate change dominates the discussion, rather than the humanism of climate change.”

During her time with the Northwest Passage project, Blum spent two weeks on a Swedish icebreaker christened The Odin, and her role was to collect data about climate change from a humanist perspective. While scientists collected water and soil samples, Blum studied the ways in which climate change has affected the culture and narratives told by people native to the Arctic.

Reflecting on her experience, Blum said that she found the story not to be in the Arctic itself, but how she got there. Over the course of the expedition’s planning, four different ships either canceled or were damaged before the expedition even started, delaying the start of the expedition by four years. Blum emphasized the difficulty of polar exploration, even in the 21st century.

“Polar exploration is never easy,” Blum said. “It’s always dangerous. Even in the 21st century, it’s perilous and very difficult to pull off. (It’s) expensive, difficult. The internet gives us the impression of a connected world, but in the 12 days I spent on The Odin, we did not see a single other ship, and only a single plane — a Canadian Military plane on reconnaissance, to make sure we had clearance to be in the passage.”

Blum’s presentation handed the spotlight to Gillen D’Arcy Wood, a professor of English and geology at the University. Wood also partook in a research expedition, this time to the South Pole in Antarctica.

The expedition was to help research for his book “Land of Wondrous Cold: The Race to Discover Antarctica and Unlock the Secrets of its Ice,” which was published in 2020 and focuses on the Victorian-era explorers who raced to chart the uncharted Antarctic.

During Wood’s talk, he emphasized that the thesis of his book revolves around the fact that despite the geographical distance between Antarctica and rest of society, the two are interconnected.

“The history of Antarctica goes farther back and in fact, much more critical and determinative in producing the modern climate that we experience today on planet Earth,” Wood said. “Antarctica is not remote at all, only geographically remote. Climatological and geologically, and even historically, is proximate to our human history, and the histories of humanity and Antarctica are only converging more and more closely as we speak in our era of glacial melting.”