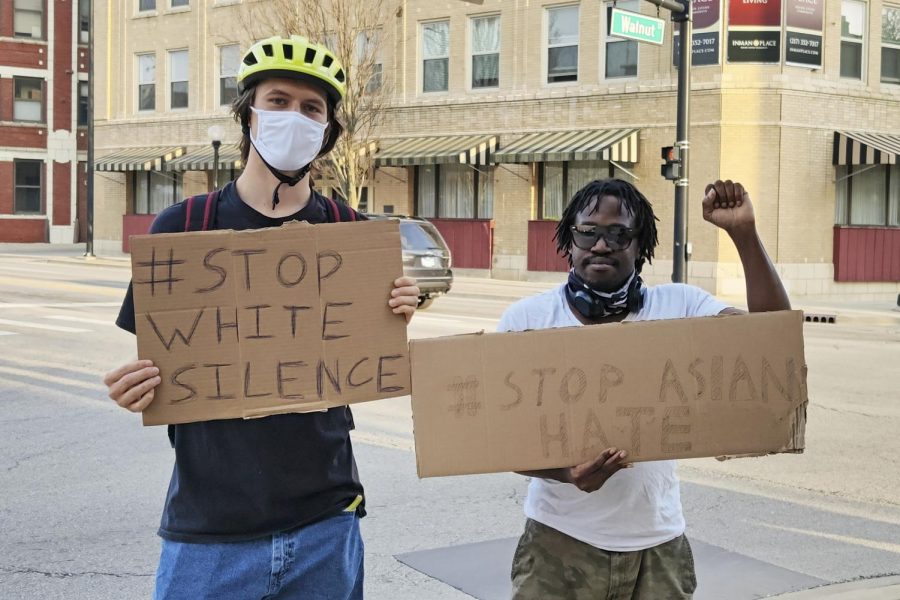 Champaign-Urbana residents Luke Lee and Eddie Pratt Jr. pose for a photo at the #EndWhiteSilence street visibility event in downtown Champaign on Wednesday afternoon. The University’s chapter of Showing Up for Racial Justice has organized two rallies thus far to demand racial justice for the Asian American and Pacific Islander community.

After the Atlanta spa shootings in March that left eight people dead, including six women of Asian descent, a surge in the Stop Asian Hate movement has seen several hundreds of people joining protests, rallies and demonstrations across the country. Champaign-Urbana has been no stranger to this national movement.
The Champaign-Urbana chapter of Showing Up for Racial Justice, a national network with emphasis on mobilizing white people for racial justice, organized two rallies showing support for the Asian American and Pacific Islander community. SURJ has organized rallies focused on working with white people.
While SURJ said there can be a culture of shame and blame in many activist circles regarding white silence, they remain determined to bring as many white people into taking action for racial justice as possible. Many people varying in race and age participated to show support for the AAPI community during both rallies.
Jennifer Putman, long-time Urbana resident and graduate of the University, who served on the county board, attended both rallies organized on March 30 and April 7. Putman said there were a lot more people at the first rally despite the better weather for the second one.
Putman grew up in Honolulu and attended the University of Hawaii. She said she was fortunate enough to grow up with people from a lot of countries that rim the Pacific Ocean like Japan, China, Korea, the Philippines and more.
“The people who I grew up with, who I went from adolescence to young adulthood are the same people who are now subjected to this awful fear, anger and hate,” Putman said. 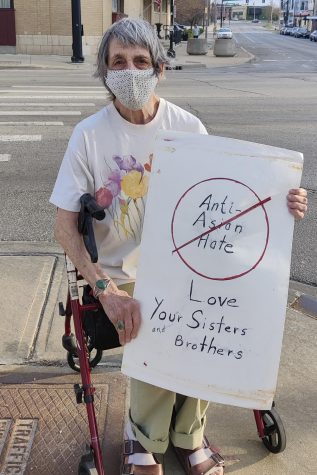 Abby Schrantz, one of the lead organizers of such events at SURJ, started working with them since last June. Schrantz, who organized and attended a considerable amount of demonstrations during the last 10 months with the Black Lives Matter movements, noticed that word of mouth helped propagate these events more.
While Schrantz still makes a Facebook event page and spreads the word across her personal circles, different online groups and local organizations, she said that word of mouth helped more because a lot of people who hear about a demonstration and attend it usually come to the next ones, sometimes bringing more people with them.
The location is another crucial factor for the number of attendees and the exposure of these events. The organizers at SURJ had to find a safe spot with a good amount of space where protestors could be visible and heard. The location eventually chosen was in front of the Champaign City Building on the corner of University Avenue and Walnut Street.
“We started doing them here around last summer, and we noticed that just this intersection was getting a lot of traffic and a lot of attention,” Schrantz said. “We were also doing some at the Urbana Police Department, but we felt that this was just a lot more engaging with everyone driving by, waving, cheering and honking.”
For Andrew McDermott, recent admit to a University master’s program for urban planning, the rally was more of a family event. While McDermott didn’t attend the first rally, he attended the second one in April.
“My mother who lives in the area, too, found the Facebook page for this rally, so I just came out, it’s been a whole family thing,” McDermott said. “She came out earlier.”

McDermott and Qing Lu, with whom he attended the roadside demonstration, said that with racial justice being such a focus right now, continuing to get involved would be a good chance to get their voices heard, not only for Stop Asian Hate but also to highlight the Black Lives Matter movement.
Luke Lee, another primary organizer at SURJ who moved to the Champaign-Urbana area last September, has organized several End White Silence rallies with SURJ.
“Whenever the weather was bad, and it was too cold for us to stand out like this for a while, we would just have car rallies — driving around with music and flags just to spread the message — to end white supremacy and end white silence,” Lee said.
While it was not Lee’s first rally, the rally held on March 7 was Eddie Pratt Jr.’s first rally against Asian hate. Pratt had been involved in many other rallies and campaigns. However, when Pratt and Lee got to talking, they realized they had both been involved in the No Ameren Shutoff campaign together and were surprisingly already acquainted with each other.
“Solidarity is important, especially when you’re in this fight and you’re trying to do the right thing,” Pratt said.
“It’s easy to be bogged down, to feel defeated, you can feel it fighting against you in so many places almost at once,” Pratt said. “If you get a chance to be part of an organized event like this where you can congregate with people who have the same ideals, it’s invaluable.”