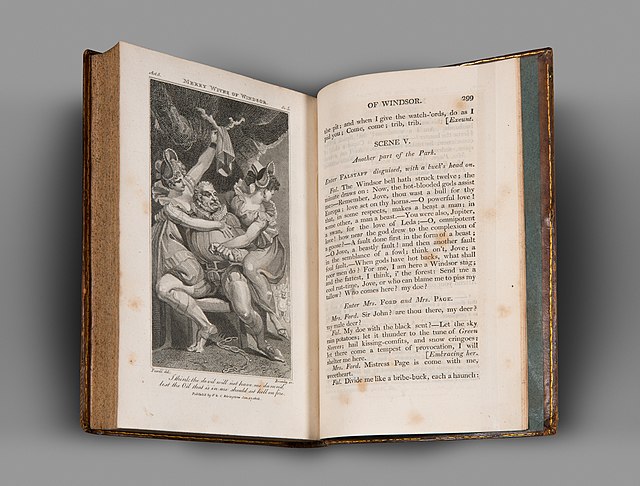 A photo a book containing plays such as Two Gentlemen of Verona, The Tempest and Merry Wives of Windsor by William Shakespeare rests on display. Shakespeare’s birthday was remembered by a week-long celebration featuring his writings.

Over 450 years ago and nearly 4,000 miles away from Champaign, William Shakespeare was born. Despite this massive spatial and temporal distance, the University has a few connections to the famous playwright.
To celebrate those connections and the birth of one of the most important literary figures in the English canon, the University’s Rare Book and Manuscript Library hosts a Shakespeare’s birth-week celebration each year. The exact date of Shakespeare’s birth is disputed, but scholars agree he was born sometime in April 1564. Because of this, the Rare Book and Manuscript Library dedicates a whole week to celebrating Shakespeare’s birth.
During a typical year, it is not uncommon to see library staff, English faculty and Shakespeare enthusiasts don Shakespearean garb, borrowed from Krannert’s costume vault, and recite a sonnet or two. While this year’s virtual celebration, which took place from April 19-23, was more reserved than other years,’ Illini made their love for the Bard known through enthusiastic readings of his most famous sonnets and verses.
Ruthann Mowry, visiting curator at the Rare Book and Manuscript Library, helped organize this year’s virtual celebration. She set out to find a way to continue this tradition in an innovative way, without any in-person interaction.
“This year was very different because we are not open to in-person events,” Mowry said. “So, we were trying to think outside of the box and come up with an event we could share the celebration with everyone, but of course not letting them into the building and having those face-to-face celebrations, so we came up with the idea of asking people to participate by reading, or doing whatever you wanted to celebrate Shakespeare, we had people submit videos, and as you know we’ve been posting them to YouTube.”
Throughout the week, eight videos were uploaded to the Rare Book and Manuscript Library’s YouTube channel of students and faculty alike reading their favorite excerpts from Shakespeare’s bibliography. Vincent Carlson, doctoral candidate in Theater, read “Sonnet 147,” a sonnet written from the perspective of a poet who views his affection for his partner as a sickness. Lynne Thomas, head of the Rare Book and Manuscript Library, read “Sonnet 20,” one of Shakespeare’s Fair Youth sonnets.
Thomas, who holds a Master of Arts in English and American literature, believes Shakespeare’s works are worth celebrating for the joy they could bring, even in a time as strenuous as our current situation.
“We’re of course familiar with Shakespeare as part of the literary and cultural canon, and the fact that we are still reinterpreting, performing and reading his works over 450 years after his birth is a very good reason to celebrate his birthday,” Thomas said. “But it’s also a matter of remembering, particularly during a global pandemic, that we are capable of having fun. Much of his work involves a delightful playfulness that is important to hold onto in life, especially when things get difficult. Even his tragedies include comedic moments and characters, because life is like that.”
The Rare Book and Manuscript Library is home to numerous items relating to Shakespeare. Perhaps the most important Shakespeare-related material in the Library’s collection is a copy of “Mr. William Shakespeare’s Comedies, Histories, & Tragedies,” commonly referred to as the First Folio. Published shortly after Shakespeare’s death in 1616, the First Folio was the first time his works had been compiled in one collection. A large portion of the works present in the First Folio were previously unpublished, and the Folio is the only reason we have any record of their existence.
It is believed only 750 copies were printed of the First Folio, and in present-day only 235 remain.
“Part of the reason we celebrate Shakspeare’s birthday is that he is such a huge figure in our collection,” Mowry said. “The world surrounding him is a collection strength, and it’s something that, since it is so big in our collection, we like to share with other people. A lot of people are familiar with Shakespeare, so it’s something that is easily accessible for a broad range of people because they go into it already knowing who Shakespeare is.”