“We’re designing the world of tomorrow.” 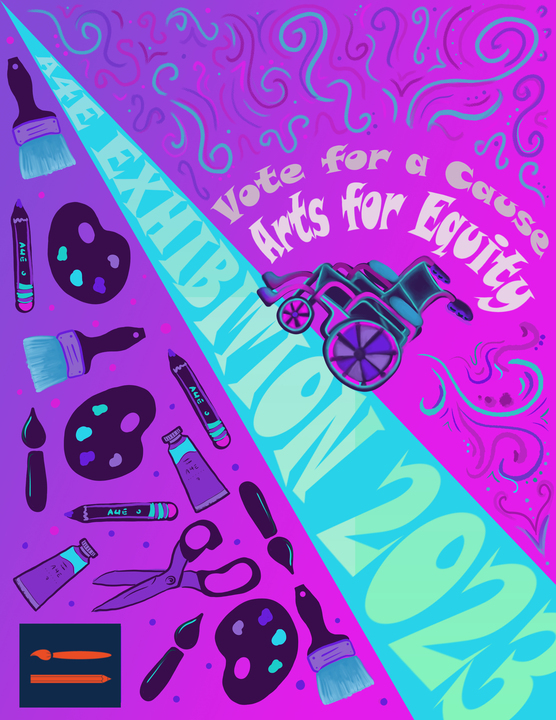 A student made poster for the A4E Art Exhibition is shown above. Professor Stacey Robinson speaks about art being for everyone.

Assistant Professor Stacey Robinson’s pan sizzled and popped on the stove, each crackle of olive oil releasing the mouthwatering scent of vegan sausage into the room. Sporting a black hoodie and sweatpants, he prepared breakfast and explained each step as he went along.

“These sausages are awesome,” Robinson said. “They’re my favorite.”

Robinson could finally take a moment to relax from what he said proved to be the most challenging semesters he’s taught at the University.

From his desk, he explained to two courses he taught: ARTD 299: Special Topics, where Robinson taught illustration; and ARTD 333: Type and Image.

He described it as the work in an artist’s portfolio that differs from everyone else’s so an artist will have a piece or series of intellectual property they can use to find freelance or entrepreneurial work. It might not be the work an artist wishes to pursue, but Robinson said it’s an option that can put food on the table and launch careers.

This is one of the first lessons that Robinson teaches his students — the practical side of creation. He said that students should always bet on themselves and their ideas but still need to put in the work and gain the skills necessary for their bet to be successful.

While Robinson continued to cook his sausage stir fry, he added the bok choy and thought of the second project he led this school year.

“The second project in both of my classes were projects that ended up being dubbed social responsibility projects,” Robinson said. “In making them, students could either work individually or they could work in teams, and they had to come up with a problem they wanted to address.”

Robinson provided students with the results of a survey that students, faculty and staff filled out after the 2019-2020 school year regarding the state of the University. The survey asked respondents how the University can better serve its community.

Results from the survey showed many wanting more spaces to meet and rest, a more diverse curriculum and a few other unique challenges that surfaced during the pandemic.

“One student talked about issues of walking home safely at night, so she designed a robot that would accompany you home,” Robinson said, his eyes drifting upwards as he thought of student responses. “We’re thinking on levels like that, but also thinking ‘I just want to be able to sit down and converse with my friends.’”

Another student’s project was concerned with the accessibility of art. They designed alt text to be paired with their own art pieces, in order to describe the subject of each piece to those that couldn’t see it.

I believe that students have to make the school that they want to exist. It is on us to create a level of education for students, obviously. But our students are telling us what the future is going to be.”

“I believe that students have to make the school that they want to exist,” Robinson said. “It is on us to create a level of education for students, obviously. But our students are telling us what the future is going to be.”

Robinson said he believes that at some point, students just have to build the school they envision, even if they are not sure how to solve certain challenges. Robinson said that some ideas and prototypes students have will not turn out great, but from them, students can start to figure out how to improve.

Part of the education Robinson said he believes is his responsibility is to leave his students with his own works and prototypes of which they can reflect upon.

“I don’t know what’s right or wrong in my work,” Robinson said. “The future will decide what it needs from my work.”

As a simple example of adding and removing pieces from a work to make it better, Robinson described the changes he has made to his own style of teaching over the years.

Since he started teaching, he realized that he learned just as much from his students as they do from him. Robinson said he treats every one of them as his peer, something even one of his former students recognized and mentioned to him.

Another quality he is looking to add to his teaching are the occasional virtual classes. It was not until experimenting with virtual classes in the pandemic that Robinson realized all the lessons he could not teach students in a classroom.

There were a few other ideas Robinson considered adding to his teaching, and he realized that the only way to figure out if they worked was to try them.

As Professor Robinson finished speaking, he looked up to his computer and shared one last lesson.

“It’s like cooking,” Robinson said. “You don’t know how those spices are going to taste in your food — you just have to try it.”