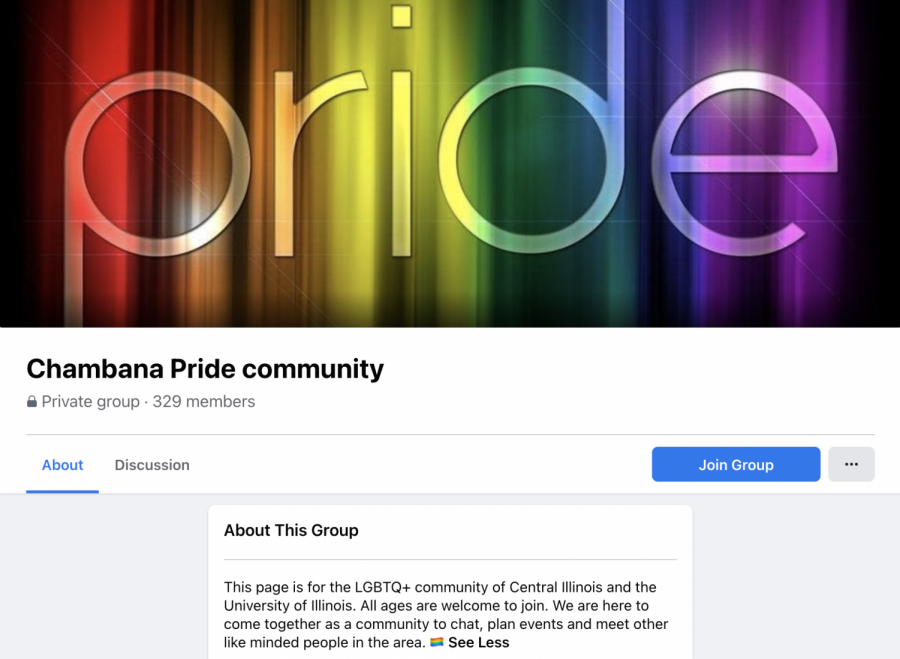 The landing page of the Chambana Pride community facebook page is shown above. The lack in UI pride events prompted students to organize themselves.

When Cory Simpson moved to Champaign-Urbana eight years ago, he said he was trying to get out of his hometown — a small town in Coles County, Illinois.

Simpson said he grew up in a conservative household with parents who didn’t accept him as a member of the LGBTQ+ community. Simpson said his hometown wasn’t exactly accepting either.

“If you’re different, you’re not really looked at the same,” Simpson said.

However, Simpson said he was surprised to find a queer community in Champaign.

Complete with lively drag shows and nights at Chester Street Bar, a popular gay bar in Urbana, Simpson said he felt a sense of community in Champaign.

When the bar closed in 2017, Simpson and his friend Nicole Mitchell, another Champaign resident, said they felt like a void was left in the local gay community. To fill the void and surround engage with a LGBTQ+ community, Simpson and Mitchell said they had to drive to drag shows and gay bars in Bloomington and Peoria.

In Champaign, Mitchell said a lot of queer community events were support groups — something she said wasn’t what she needed.

So, the pair decided to create a Facebook page named ‘Chambana Pride’ — a group focused on creating a community for the LGBTQ+ community in Central Illinois and at the University.

After posting about the group on Reddit, Simpson said many University students started joining the group.

“I’ve been getting a lot of people coming from the University page just because they don’t know where to find resources,” Simpson said.

The University has not held any events for Pride month this year, leaving many students living on campus turning to local organizations to celebrate. Simpson said he hopes the group will allow students to find a sense of community outside the University.

“Given the drop in student population during the summer months, summer programming varies depending on student participation,” Leslie Morrow, director of the University’s LGBT Resource Center, wrote in an email.

Because there aren’t as many students on campus, Morrow wrote that Uniting Pride, a local nonprofit LGBTQ+ resource center, moved their Pride month celebration from June to September. That way, more students can participate.

Although Morrow wrote that the University’s LGBT Resource Center encourages staff, students and faculty to attend local community events, Simpson said the University could do a better job promoting them.

“It seems like the University doesn’t do as good a job promoting the local stuff that happens so a lot of students don’t know about it,” Simpson said.

Darya Shahgheibi, programming director with Uniting Pride, said that she has seen an increase in University student participation during the summer. Shahgheibi said this is often because they may not feel safe to go home.

“They need a space to go to and with the University closed, they can’t attend a lot of groups,” Shahgheibi said. “So, they’ll come to our spaces.”

Simpson said he’s hoping to expand and is now planning the group’s own local events. The group is starting with an informal coffee meet-up — a type of event Mitchell said there’s not enough of within the local community.

“It’s being around your people,” Mitchell said. “They get the joke, they get the stories (and) they understand the day to day life in ways that nobody else does.”