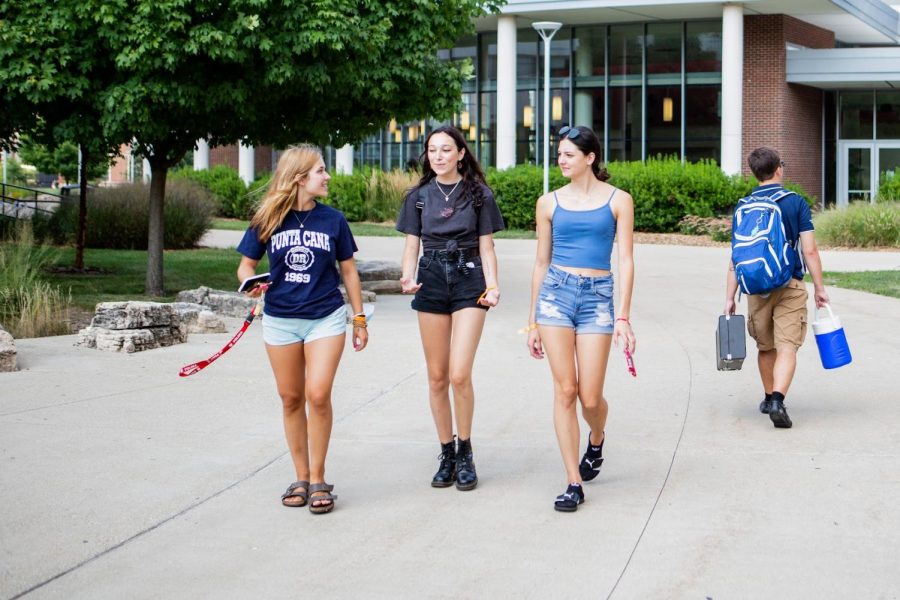 Students at the Ikenberry Commons walk around getting to know the campus. There have been several different events held around campus welcoming new and old students to campus.

With the start of the school year, the University has made efforts to welcome students to campus after what most say was a year ridden with anxiety and boredom. At Illinois Sights & Sounds, students were introduced to the spirit of Illinois followed by a performance with Ava Max, and at Illini Vibes comedy performance, students that went said Saturday Night Live’s Colin Jost lifted spirits.

Amid all these headliner gatherings, a smaller meetup bringing Reddit users together from the popular r/UIUC subreddit. The University subreddit hosts nearly 60k members, a daily virtual hub of memes, questions and discussion about university life. Many say it’s a lifeline for socialization amid the diluted college experience.

Now, many members of the forum got to meet face-to-face with each other in friendly conversation.

Cesar Monsalud III, transfer senior in Engineering, hosted the event after an extensive marketing campaign on the subreddit. They gathered at Murphy’s Pub on Aug. 20 at 6 p.m.

Greeting people with a warm smile and sign, he lead gatherers to the event space where Reddit users got to know each other and played slightly-intoxicated Jenga.

Julian Maennena, sophomore in LAS, attended the event in hopes of making friends after using the subreddit for so long.

“I just wanted to get out of my apartment after settling in and meet new people,” Maennena said. “So far, what’s surprised me was the amount of graduate students that were present, I think it’s really nice meeting older peers, it really gives a different environment compared to undergraduate peers.”

As the night went on, more than a dozen students showed up, coming from all over the campus. Some traveled farther than others.

Lorenzo Rodríguez Pérez lived in Madrid, Spain for years before coming to the University as a senior in Engineering. He said he enjoyed the night and that it was a great way to be introduced to American culture.

He elaborated on how much he enjoyed the pub’s atmosphere and the American experience.

“May God bless the United States of America,” Pérez said.

Justin Kuhn, transfer junior in Engineering, also shared his good feelings of meeting people from the subreddit, while enjoying a haphazardly put together game of Jenga on an unstable countertop.

“I saw the post,” Kuhn said. “It was a really professional poster made on the University of Illinois subreddit and of course it’s a great way to meet people, especially after COVID-19. It’s pretty fun, talking with a few people. This is my first experience socializing with anybody as I just moved a few days ago.”

That positive sentiment was everywhere that evening. Many said they saw the meetup as a great opportunity for those in weird predicaments or living situations to socialize and find good company before the school year begins. The night ended with a walk over to the Illini Union, where they converged with the ongoing Illini Union LateNighter event, where friends got together and enjoyed bowling, played Dance Dance Revolution and expressed how spending time in the Illini Union was a sad reminder that the Auntie Anne’s Pretzels are gone and never coming back.