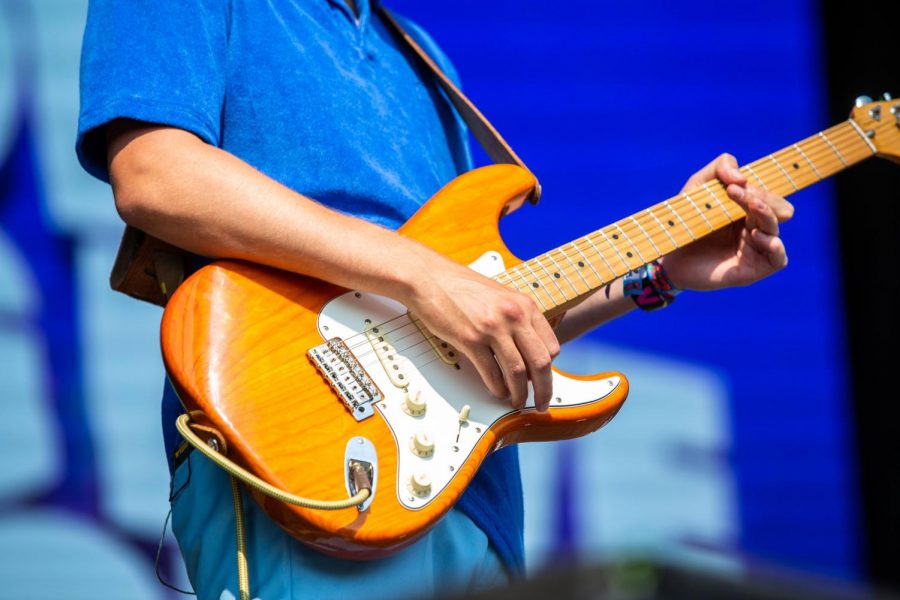 A guitarist performs during Dayglow’s set at Lollapalooza on July 29. The ELLNORA: Guitar Festival was held at Krannert on Sept. 25 and 26.

ELLNORA: The Guitar Festival went down on Friday and Saturday. The festival was a celebration of guitar and music culture, bringing together people from all over campus and the greater public to jam, vibe and rock to some chords. There was a more celebratory atmosphere than prior events, with the energy spawning from a newfound appreciation for in-person music many have been starved of since 2019.

Celisse Henderson, known just by Celisse, opened the festival with an electrifying performance on Friday, bringing a highly anticipated and charismatic stage presence to audience members stacked on the crowded rows of the white amphitheater on top of Krannert.

“I think it went well,” Henderson said. “Considering the possibility of passing out due to heat exhaustion, that nobody did that, so we did pretty well.”

The singer and songwriter went on to describe her excitement at finally having in-person shows again. Having felt the setting of the amphitheater and great crowd reaction was a sweet experience.

The crowd watched the opening performance unfold as twilight began to creep across the sky, painting an orange atmosphere that elicited cozy vibes.

Natalue Cheng, graduate student in FAA, came to the event after seeing an email ad. She watched the act and shared her positive experience of the performance.

Juliann Craft, sophomore in FAA, is a fan of Celisse’s work and shared her opinion on the event unfolding.

“I love it,” Craft said. “Celisse is doing such a great job, and I love her soulful style. So many people just love that they are here, and it’s a really nice environment.”

The atmosphere seemingly attracted those not completely informed of the event, jumping into view out of passing observation. Justin Lorenz,  graduate student in Engineering, was just that kind of viewer.

“What brought me here was hearing the music from far away,” Lorenz said. “It’s nice to have spur-of-the-moment artistic events that allow you to take it easy and go slow. A nice change of pace.”

The festival went on to have several great performances from its diverse and talented lineup. Outside of a reported elevator outage, the event went smoothly and was safe in dealing with coronavirus mitigation.

Inside the main hall was a stage performance by Joe Rauen, a musician known for playing with the most unlikely of musical objects turn instruments. He sat next to his colorful creations and spoke about his happiness being back in the live music scene.

“I like playing for people specifically into guitar music, so I think this is my crowd,” Rauen said. “I hope there’s someone in the audience who hears me today and is inspired and sets forward their own artistic journey.”